On a stormy evening late last week, Arlene was perching on the boat lift at the sailing center. She was scanning for fish. Suddenly she flew up, hovered for a few seconds above the water and dove feet first into the water. She didn’t catch the fish. Not yet. But she had all the right moves, including shaking off water in mid-air like a pro. This was less than two weeks after she fledged. And that’s nothing short of incredible. I didn’t carry the camera so you just have to take my word for it. Dylan is my witness. After coming home, I caught this picture of her from my terrace. She was back up there staring into the water…and she would try again. I call that determination.

She is scanning for fish often now. And her parents, after seeing her early progress, have clearly taken the back seat. Mama Sandy is still around occasionally keeping watch for any dangers. Sometimes I have not seen her for a day or two, but she comes when Arlene calls her. Like last night when the skies suddenly darkened and the wind picked up before strong thunderstorms. I could not see Arlene, but I heard her. She was somewhere on the roof. Sandy was flying towards her pushing against the strong winds. Really struggling. She came from the north along the bay side and landed on the roof. I guess Arlene needed adult company in the storm and her mama was there for her. Dylan and I ran home and rushed into our garage just when the first fat raindrops started falling. And then pretty much everything went out of focus.

Sandy probably feeds Arlene only once a day now, if that. Her parenting is encouraging independence. But still providing protection. And Arlene is confident in her abilities, as she has been from the day she fledged. A strong female leader in the making, as I see it.

On Sunday morning, Arlene’s two-week fledging anniversary,  I saw her perched at the sailing center. Ten minutes later I went for a walk and saw her eating on Marriott’s roof, at her favorite spot. I wouldn’t rule out it was the first fish she’s caught by herself. No parents were in sight.

Young Arlene has not followed the conventional path to independence. You see, normally, Osprey chicks stay at the nest being fed by their parents at least 4 weeks after fledging. They start to follow their parents on fishing trips during the 3rd week and start to try to fish on their own at 4-6 weeks after fledging. Not Arlene. She left the nest the day she fledged and directly started to fly with her folks. She was diving for fish 12 days after fledging…and now, 16 days after her fledging, I think she might be able to provide for herself already. I am sure Sandy will not stay in the vicinity for long. And Arlene, too, is likely to move a bit further soon. But as long as she stays here you’ll have ‘full and impartial coverage’ on this brave and beautiful chick by this media outlet.

On Sunday, I also briefly visited the salt marsh between heavy showers. After two weeks of rains, everything at the salt marsh was green and the water level was high. Consequently many of the waders were keeping away for now. I guess they don’t like their bellies getting wet while wading in high waters.

But that memo had not reached the juveniles. Or perhaps they are more adventurous simply because they are not looking at the world through the lens of conventional wisdom. Some of them were happily wading on previously dry mud flats or amongst the high grass. First I spotted the same juvenile Little Blue Heron I saw a couple of weeks ago. He had turned much more blue already, as you can see.

The second juvenile wading at the marsh was a very small, young Green Heron. He still had some of his white ‘baby hairs’ right on the top of his head, but was bravely doing it alone. 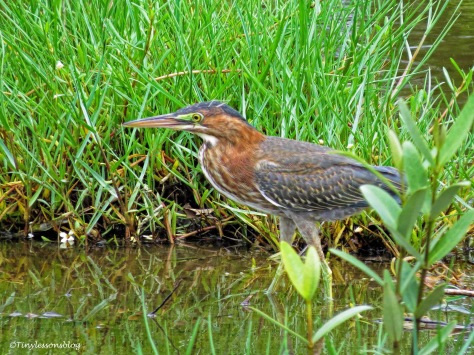 The third juvenile I spotted was a Boat-tailed Grackle. She was in the company of her mother…and although she had fledged, she was still asking to be fed. Quite unlike Arlene.

The fourth juvenile, the Roseate Spoonbill I had named Rosanna, was observing life from a tree at the deep water channel. 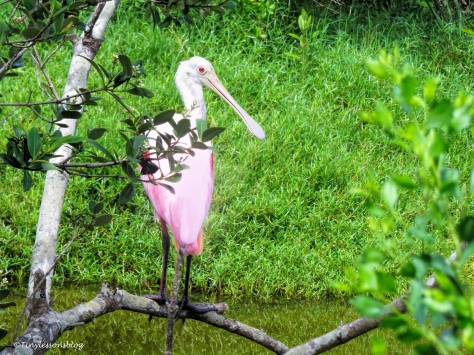 The only adult wader I encountered was the beautiful Snowy Egret. I thought she looked like a white flower in the midst of the green grass.

And that’s when they arrived, the two Black Skimmers. They flew at extremely high speeds while skimming the surface, water spraying all around them. They put on a wild show. I enjoyed trying to catch them in flight. But they did beat me time after time…resulting in many pictures of water, sky and grass – without a Skimmer. One has to learn one’s limitations the hard way. 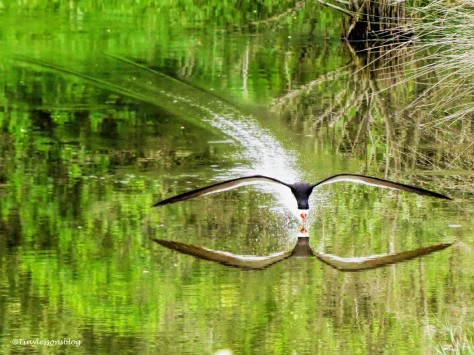 We all wish you a wonderful rest of the week. Thank you for visiting.

69 thoughts on “In Focus: Incredible Arlene”