I was organizing my closets today, clothes and shoes, you know. Trying to shift from the almost-nothing-on Florida summer wardrobe to the just-a-little-bit-on fall set-up. Nothing strange with that, but somehow I found myself reflecting on my shoes. Don’t get me wrong, I’m not a shoe freak, have just enough pairs to get me around to the places I need to go to. But I reflected more on the experiences my shoes have taken me to.

I looked at my blue suede boots and remembered the time last winter when I was running to change planes at Frankfurt Airport. Those of us who have had the pleasure to visit that airport, know that it is huge! The minimum safe transit time is 90 minutes. But my plane was late, I barely had 45 minutes to spare before my next flight. So I had to run. But I didn’t have running shoes! I had given into the vain desire to have a matching attire. Silly me! And now I had to pay for it. So there I was running in my high heels, dragging my carry-on behind me, half in the air.  Can you see the sight? My fellow passengers certainly did – and got a good laugh. I could see the looks they gave me and hear the whispers…poor old lady running for her life in those heels. Remember that to the younger crowd, anyone over 40 is really old…My feet were hurting and my poor ankles were sore for the duration of that whole trip. But I made it, despite my blue suede shoes.

Next I saw my old walking shoes. They have a funny story to tell and I’m lucky to be here telling it. A few years ago, I was walking on a big city street in a very distant country. I was going to get a hamburger for lunch. The street was not crowded and I was walking fast. Suddenly three young men appeared in front of me. I started to walk past them when I felt that the guy on my right stuck his hand to my jacket’s side pocket in an attempt to become the new owner of my tiny cell phone. Without a conscious thought, my right arm went up and my elbow jammed a karate-like strike into the guys rib cage. And down to the street he went. He was down – and I was outta there!

His companions were so stunned by this dangerous old woman that they didn’t try to catch me when I sprinted away.  Instead they marvelled at the fate of their friend, I heard them laughing at him.

I’m not a karate-kid, but just a few months earlier, I had visited one of the self-defence courses my department was giving to staff working at psychiatric hospitals. Being the main sponsor of that training course, the instructors wanted to make sure I got some practice as well. And there it was, the skill was still in my subconscious mind. I reacted instinctively. My good shoes took me away from the scene with lightning speed.  And with my phone still in my possession, I could call a friend to pick me up from the restaurant. Needless to say, I was pretty much incognito for the rest of my visit to that city.

Then there were my new shoes. They have not yet brought me any adventures, but I bet they will. I just hope those escapades will be on the calmer side. I don’t want to sprain my ankle or be accused of using excessive force in defending myself. Maybe I’ll get an invitation to an art exhibition or even a soirée one evening. That would be nice.

Look closely and you will see

the small ingredients of life

mixed together with perfection.

It may not appear that way

when dreams crash and hope

is a hiding on a cloud in the sky.

Or when the view is distorted by fear

and worry is pouring down

relentlessly in the raging storm.

But if you look closely, with trust

you will see the perfect hues

spun into the filaments of life. 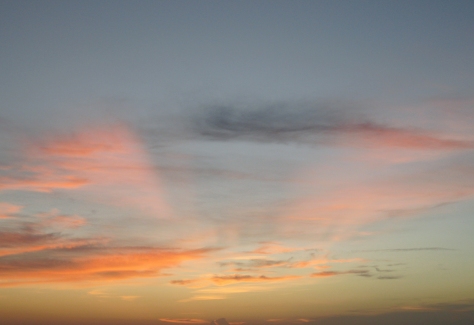