It’s been difficult to get pictures of our osprey girl, Bubbette. She is a very ambitious student and attends the fishing school with Papa Stanley all day long. A few days ago when I started to get worried about her staying away so long, I went to our terrace with Dylan in tow and spotted Mama Sandy waiting for her at the nest. A Blue Jay had conquered the perch and kept flying over Sandy numerous times. He even landed on the nest. Sandy just ducked and made no effort to chase him away. She demonstrated great patience with the little one. I have to say I was impressed. I documented this rare event, but as the pictures were taken with my 1200mm zoom the quality leaves a lot to desire. 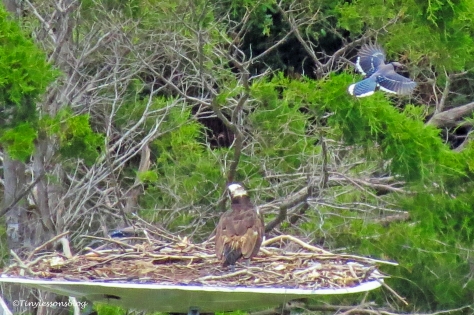 Did you spot the second Blue Jay at the edge of the nest? Sandy certainly did. But she took it all with stride.

In the last couple of days Sandy has joined the faculty at the fishing school, and the nest has been mostly empty. Bubbette leaves around sunrise when this night owl is still soundly asleep and often returns only just before sunset. In the last two weeks I have only found her at the nest once during our day time walks.

But when we go to the doggy park in the evenings, she and Sandy have been back at the nest and we have spotted Stanley fishing on the bay.

The other night we saw the Blue Jay again. He was sitting on the perch and talking to Bubbette and Sandy. 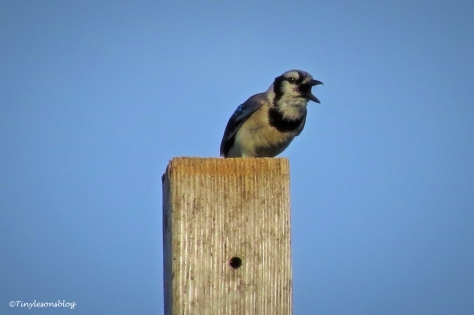 I was wondering what he was saying. It looked like he was asking to be adopted. He flew repeatedly over the nest and always landed back on the perch. Both ospreys were extremely understanding with him.

Anyway, on our one daytime walk we spotted several familiar faces. The Mayor was back! And he caught a big fish!

This surprised us and one of the Snowy Egrets watching near by. 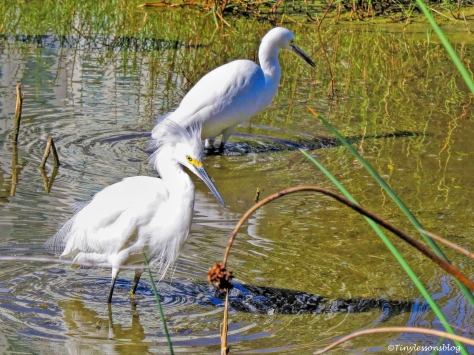 But the Reddish Egret, aka the Clown, only got more motivated to continue his fishing expedition. I really like to watch this charming red head. And he knows it.

Harry, the younger GBH, did not witness the catch. Wisely, he stayed out of the Mayor’s sight at the opposite end of the marsh.

Yesterday I monitored Bubbette from my terrace. She was away the whole day and I started to get worried. Finally around 7 p.m. I spotted her alone in the nest. I took my camera along for the walk to the dog park. You see, I am not sure she will be here when I come back from my travels in about one week. She is an advanced flier already and the past couple of nights, Sandy has let her sleep alone in the nest. That means she’s considered almost ready to move from home and is fed only sporadically by her parents. We found her in the nest asking for food, although it was a quite half-hearted request. Her crop was fairly full.

When we were close to the dog park, I turned around and noticed she had company. The little Blue Jay was back on the perch. They enjoyed the last rays of the day together.

When at the dog park, we heard her asking for food again and I walked up to the fence to see if Sandy was back at the nest with a bite for the night. She wasn’t. But the marsh bathed in the warm glow of the setting sun.

Bubbette was learning that the free meals would be fewer and far between. When we left the dog park, we spotted a few more friends at the almost dark marsh. I saw a flash of red and noticed a male Northern Cardinal landing on a tree just ahead of us. My assistant kept a low profile and I managed to get a shot before he flew off.

A Tri-colored Heron was getting a late snack and Harry was, as he often is, watching the osprey nest. 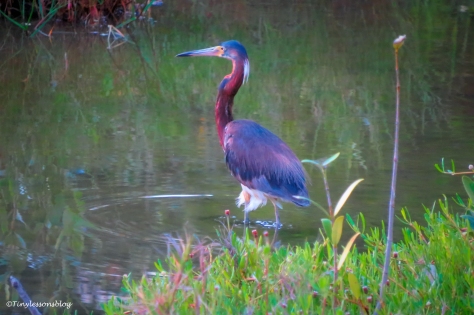 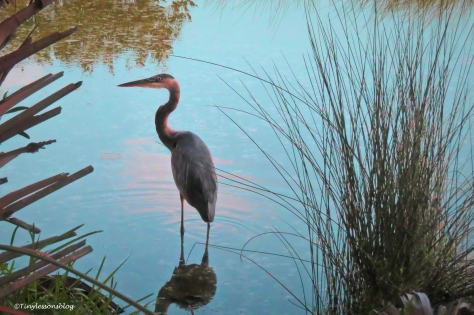 He saw that Bubbette had flown up to the perch. A sign of mastering the skill of flying. Perhaps she was checking if any of her parents were nearby and hoping for a late night snack.

And, indeed, Sandy was perching at the Sailing Center right across the road. She was looking at Bubbette. It might have been too dark to go fishing, but who knows… 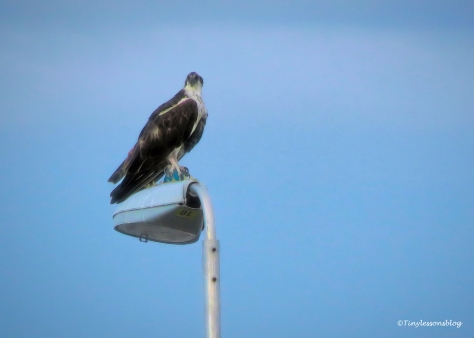 Today at lunch time, I spotted both Sandy and Bubbette at the nest. And faintly heard the fish-fish song again. I will miss that song and hope to hear it again when I come back next weekend.

I will leave you with last night’s beautiful glow over the salt marsh. Thank you for visiting. Be well.

95 thoughts on “Really?! Surprising Developments at the Salt Marsh.”