On Friday morning, I went to the kitchen to brew my second cup of coffee and suddenly remembered I had not yet checked on the Osprey Family. Mr. Dylan and I have been keeping a tight watch on the nest, particularly from the mid week on as the weather started to improve. At sunset time the previous night we spotted Bubbette sitting on her favorite high ‘chair’ in the nest looking out on the bay. She was clearly dreaming of flying. 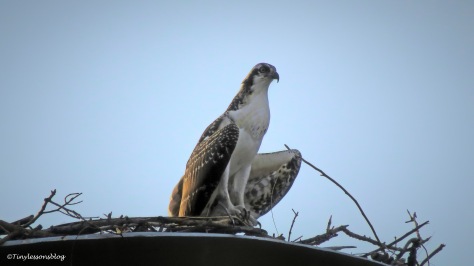 I picked up my binoculars and looked out through the living room window.  Just like previous mornings, I found Bubbette in the nest and Mama Sandy on the perch. I was about to put down my binoculars when Bubbette took off. Just like that! I ran to get my camera and discovered my battery was out of charge. Finally found my spare and ran out to the terrace with Dylan in tow. I spotted Bubbette right over the bay. She was at least 600-700 yards away, close to the opposite shore. She was flying low over the water. I couldn’t hear her, but it looked like she was singing her fish-fish-song.

I discovered that Papa Stanley was circling high up in the sky right above her, but couldn’t get them into the same picture. It was heart-warming to see Papa protecting her on her first flight.

Then she flew higher up and continued her adventure towards the mainland. My heart was racing because I knew the Bald Eagle couple nests at the Country Club on the other side of the bay. Luckily Stanley was close by. Bubbette flew further away and I could hardly see her. Finally she turned back towards our island and I spotted her again.

I watched her fly. What a beautiful sight. A few minutes later she made a perfect landing almost in the middle of the nest! No second try, no landing on the ground. Sandy watched her proudly from the perch. And her ‘grandma’ on the terrace was equally delighted. 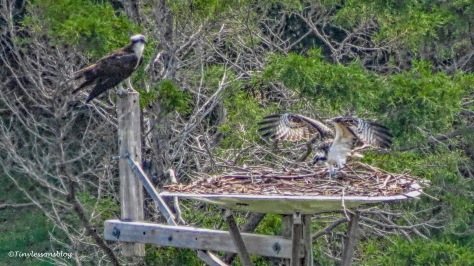 At lunch time Dylan and I went out to see her, after a dog park visit of course. We found Sandy on the perch and Bubbette in the nest. I was hoping she would fly out again. 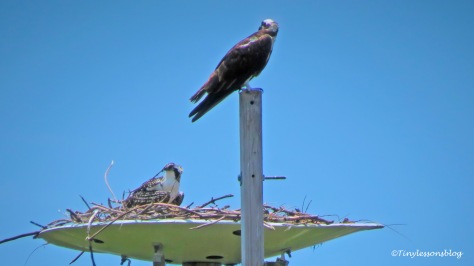 But both of them were busy looking intensely towards the bay. Little did I know that Stanley had planned a graduation party. I had not seen him at the nest since Sandy chased him away from the perch almost two weeks ago. No kissing and making up as yet. But he had been doing fly-overs and checking on his girls every now and then. And he had flown with Bubbette that morning. 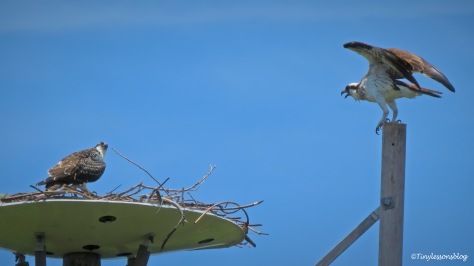 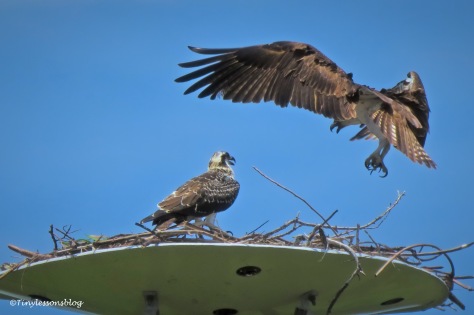 … and they started a frantic duet, eyes trained on something beyond my horizon. 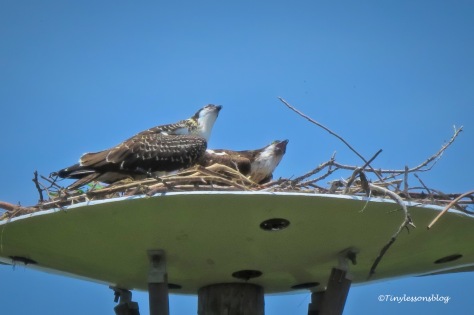 I could hear the wing beats when Stanley flew right over my head. Papa was in the house! Seeing that whopper of a fish Bubbette and Sandy were full of excitement.

And it was a whole fish solely for the girls, delivered directly from the bay.

Stanley steered to the right, grabbed the fish with both talons and placed his catch perfectly in front of Sandy. Perhaps as a combined graduation and reconciliation gift. 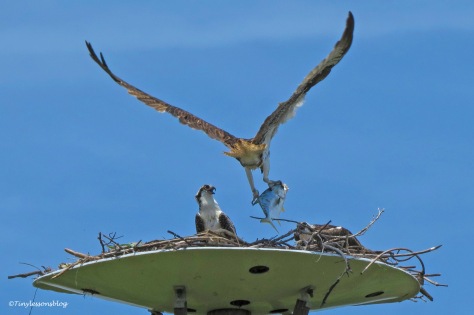 While Sandy grabbed the fish, he exchanged greetings with Bubbette.

A few seconds later he took off again. 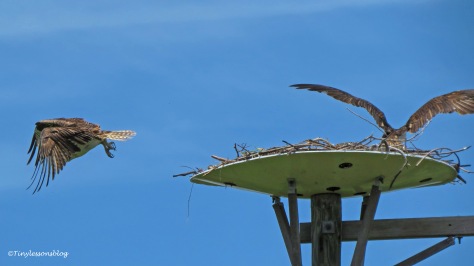 I guess he didn’t want to overstay his welcome. Sandy placed the fish so that both of them could eat from it once she was done with the head part. 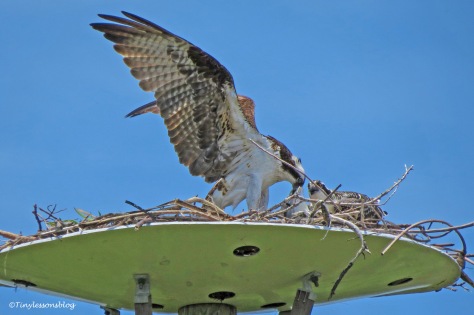 We left them to enjoy their celebratory lunch and walked home.

That was a great graduation party. Always lovely to see the new generation take flight. Since then Bubbette has been out several times, including over three hours yesterday morning. And she’s out flying this morning too. I guess she enjoys her newly acquired freedom and is eager to learn how to fish. And her Papa is a great teacher. In about a month she will be ready to leave the nest and start her independent life somewhere nearby. We hope you enjoyed the party and wish you a great week ahead.