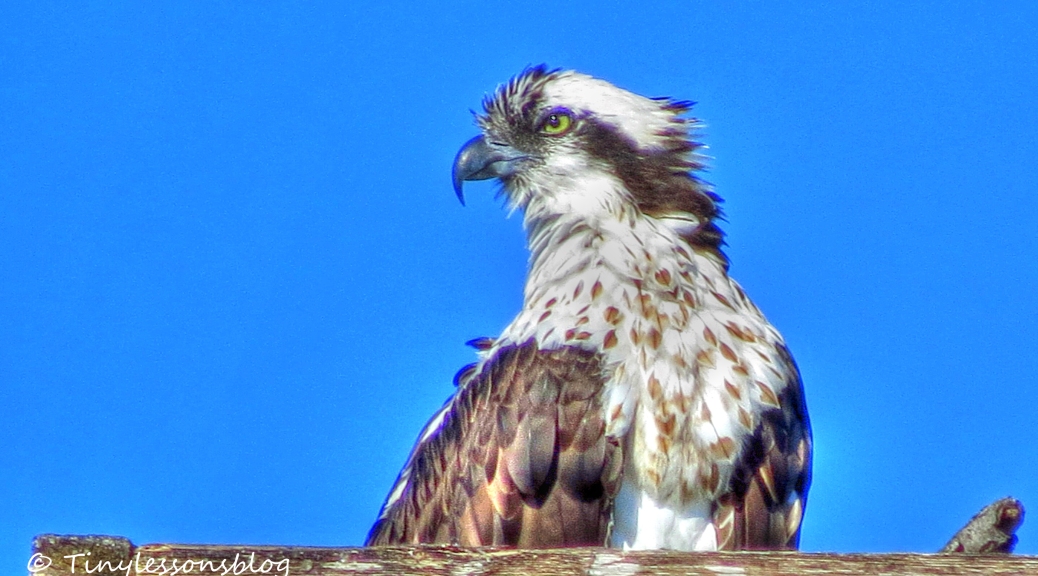 After neglecting my exercise routine for almost a month, and eating far too much over the holiday, I decided it was time to get out. Not to the malls or other crowded venues offering black stuff for mere pittance, but to the salt marsh to check on my feathered friends. The weather was finally sunny and the strong winds had calmed down quite a bit.

I was eager to see how the residents had fared the stormy weather and whether or not Papa Osprey would still recognize me.

There we signs of minor wind damage, dead palm branches and small debris scattered everywhere. And very few birds out and about. I almost got worried. But then I spotted this Great Egret. He was hunting. Looking intently into the grassy pool of water, waiting patiently, and then making his move.

He caught a little frog (click to enlarge, and you’ll see). He ate it and flew away to the sunny side of the marsh.

I continued to Papa’s nest. He was there, initially awake and checking his surroundings. But he had a full crop, much like mine after the holiday.  He was sleepy. After nodding a greeting, he soon fell asleep perching on the edge of his nest to digest his breakfast. I thought that was neat. Tiny was not a threat, it was okay to doze off. He looked cute sleeping like a baby, I thought.

I let him sleep and walked around for a while looking for more birds. I found the Moorhen family, all three together, on an after breakfast swim.

And whoops, suddenly a Little Blue Heron landed almost in front of me. I assume he’d been away for Thanksgiving.  Welcome home you little one!

But all the others were still sleeping, hiding or just away somewhere. So I decided to walk to the bay side to look for more familiar faces. But the pickings were slim.  To my delight I spotted at least one resident of the salt marsh, a Yellow-crowned Night Heron.

That was rare as they usually don’t hunt after daybreak. I always find them dozing off in the bushes, but not this one. I hope he wasn’t sleepwalking.

I feel so much better after the long walk. My “crop” feels a little smaller. I hope yours does too.  ❤ Tiny

30 thoughts on “Not Crowded. After Thanksgiving in the Salt Marsh.”