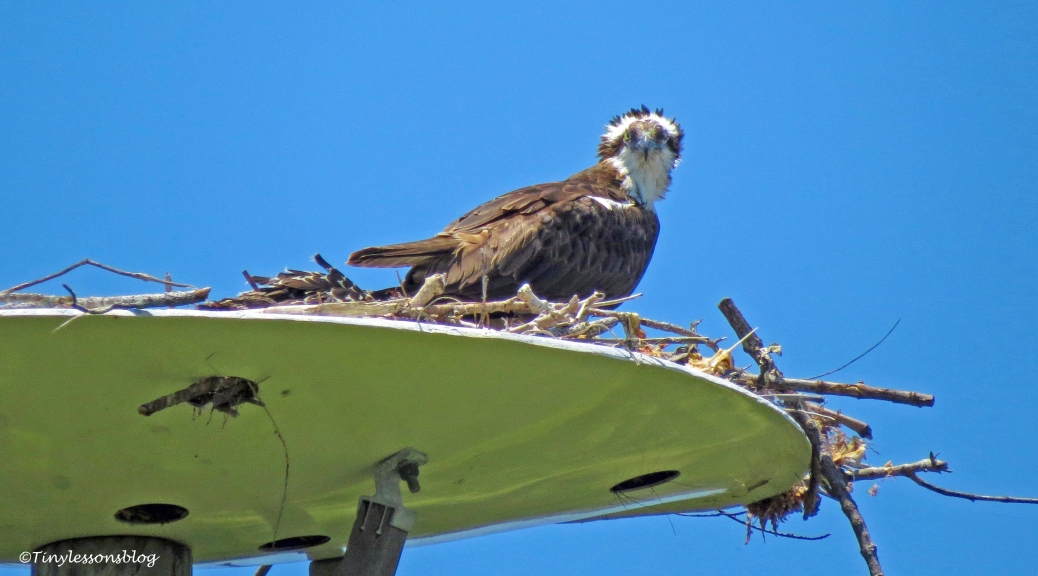 When it rains it pours. Once again I have validated this old say. But such is life. Every now and then we are reminded that we are not in control of our own life, and even less so of the lives of the people close to us. We need to accept what comes our way and adjust. There is no other way.

This has also been true for the Osprey Family. Towards the end of April they still had two hatchlings, but it seems that – like in the last three years – the younger one didn’t make it past week three. I have learned to accept this as a way of nature to ensure that at least one strong chick fledges. And this one is growing very fast, here pictured at about four weeks (above) and five weeks (below)old with proud Mama Sandy.

My assistant and I have seen the Osprey Family somewhat regularly, mostly at sunset time on our way to the doggy park. And I have to say Mr. D. is behaving truly well with the birds. And that now includes the many ducks at the salt marsh. He’s truly earned his diploma.

On our way home we often walk right under the osprey nest and the other night we witnessed Sandy and the chick waiting for a late supper at sunset.

Sandy was nodding off, but the chick was alert examining its surroundings. But where was Papa Stanley?

We walked over to the bayside and spotted Miss Rosa working on her dinner.

And to my delight, the Skimmers were back! We have since spotted them also at the salt marsh.

Papa Stanley’s favorite perch at the Sailing Center was empty. I scanned the bay and the sky and finally found him far away, close to the opposite shore. He was fishing.

He spotted a fish several times, got ready to dive but aborted in the last minute. We followed his attempts with great interest but finally had to leave before he caught a fish. Right after we got home, we heard some noise over the salt marsh… and a huge bird was landing only a stone throw from the osprey nest.

There were several emergency vehicles close to the landing site and after about five minutes on the ground, the huge bird flew off again. It was transporting someone to a trauma center in a bigger hospital on the mainland.

Whoever that person was we wished him or her the best. Mama Sandy is used to see such a huge bird in the park every now and then, but I’m sure the little one was quite puzzled by the noise and the size of that bird.

We have also taken a couple of walks at the Taylor Park. It’s been more quiet there too, but we spotted a tiny Least Bittern which I have never before seen in the wild.

A beautiful Green Heron was running on the shore vegetation…

… and a red-bellied Woodpecker was working a big tree right above the trail.

And, of course, we spotted an Anhinga. It was reading the warning sign and then checking the water…

… and there it was – a large alligator. It was taking a keen interest in me and my assistant and when it started to glide closer to the shore, we decided it was time to leave.

So yesterday Dylan and I decided to go out in the afternoon’s heat and check on the ospreys. We saw Papa Stanley taking in the sun on his favorite perch on the bayside. He was keeping an eye on the nest…and us.

When we arrived at the salt marsh, the little one was showing of its impressive wingspan to Mama Sandy.

We sat on “my” bench in the shade and watched them. Soon we discovered that the little one not only exercises its wings already, but has also learned to talk. When Sandy started asking for an afternoon snack, the chick joined her in the fish-fish-song! They both knew that Stanley was close by and could hear them.

We were about to go back home when the song went up to falsetto… a sign that food was on the way! We could see Stanley circling around the nest and then landing with a long, slim fish, head already eaten of course.

Sandy managed the placement of the fish and started eating it together with the little one. Stanley sat happily on the other side of the nest. We left the family to enjoy their snack and promised ourselves to be there when the chick is fledging, probably within the next one week or so.

Once I can determine whether it’s a boy or a girl, we will have the name draw again. Thanks for coming along and please check back soon again.