The season’s first subtropical storm, Alberto, will soon be making landfall on the northern Gulf coast, now packing 65mph/105kph winds. Yesterday it was churning past us about 135 miles out on the Gulf. It didn’t come here, but the “low” associated with it has brought rainy weather and gusty winds already much of last week for us. And although we now see glimpses of sun every now and then, the winds are still very gusty. As far as I know, Miss Bubbette has not yet fledged. I think Mama Sandy has put her under strict orders not to try her wings in this weather. On Wednesday, Thursday and yesterday when we had some dry weather, Dylan and I went to see her. 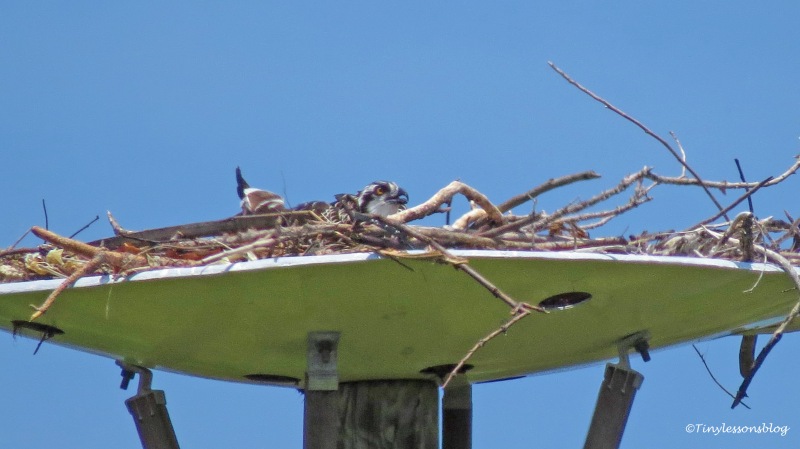 On Wednesday we found her alone in the nest keeping a low profile. Mama Sandy was flying overhead and sounding loud warnings.

I realized she was chasing away a male intruder who had ventured too close to the nest.

Sandy soon returned to the nest and I understood she had flown away in the middle of her lunch. She continued eating. Bubbette had probably already eaten, but asked for more so Sandy was feeding her a few more bites from her own lunch. Mother’s love. 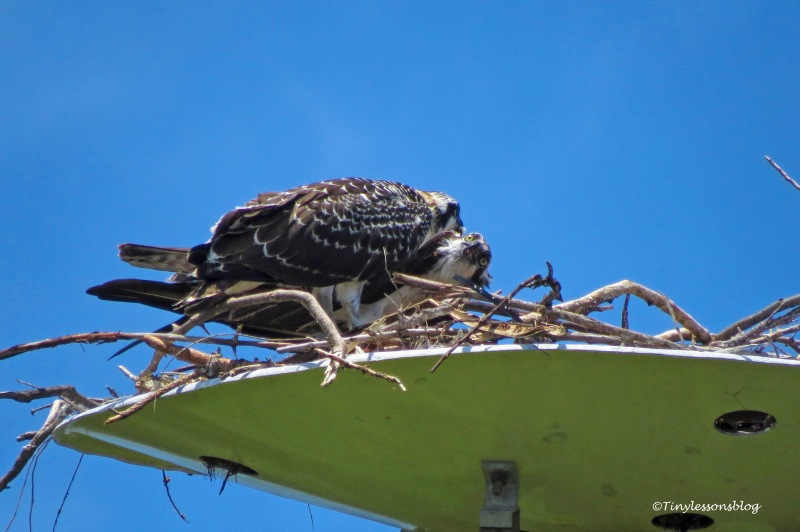 After finishing her lunch, Sandy flew up to the perch. Bubbette continued her wing exercises.

We walked around the marsh and saw a few friends. Miss Rosa was visiting…

… and foraging together with a Snowy Egret. A Yellow-crowned Night Heron was hunting too, which is rarely seen in the middle of the day.

And Mr. Moorhen was checking out his territory. Otherwise the marsh was quiet.

On Thursday we went out again quickly between the rain showers. Bubbette was exercising her wings again. She did not take off the nest, but ‘flew’ onto the highest branch in the nest.

And she was hungry. She had, indeed, learned the most common osprey song: Gimme Fish.

And she knows her “head bob”, so typical for ospreys. Mama Sandy just sat on the perch. After a while she took a short flight towards the bay. Perhaps to check if Papa Stanley was somewhere close by eating the head of their lunch fish. You see, I had witnessed a small brawl between Sandy and Stanley the previous night when watching the nest from my living room. Stanley had brought a fish and was sitting on the perch when Sandy suddenly flew up and literally pushed him away. I had no idea what he’d done, or if he would still bring in fish for that matter. I have not spotted him at the nest since.

The sky had filled with clouds and we left Bubbette and Sandy to wait for their lunch.

Yesterday I went out to the terrace to take a picture of the nest through the rain. I was thrown off balance several times by the strong wind gusts. No wonder Sandy doesn’t allow her girl to get airborne as yet.

Later in the afternoon when the sun came out, I looked at the nest again…and could not spot Bubbette! I thought the poor girl might have taken off in the gusting wind, which made it difficult to fly even for experienced fliers. I took my camera and went out Dylan in tow. The wind hit us hard.

We arrived at the nest, but could only see Sandy on the perch. The wind was blowing so hard that it forced three Anhingas on their way to the bay to land at the marsh. 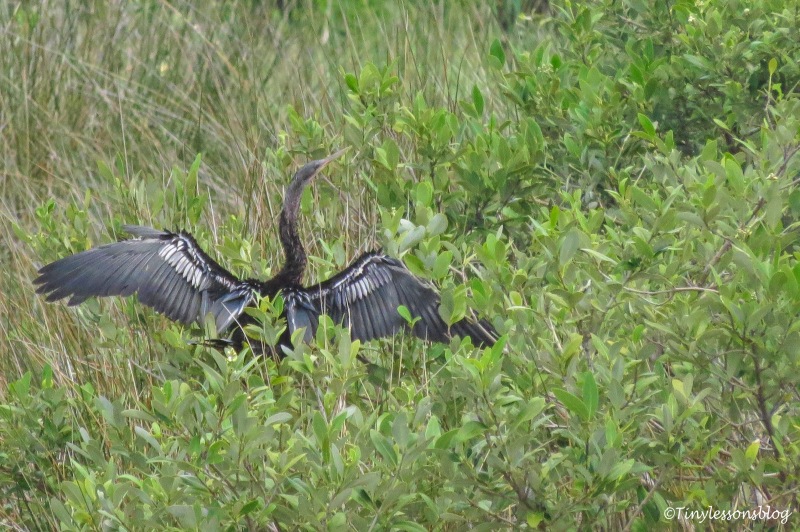 Still no Bubbette in sight. This ‘osprey granny’ was starting to get worried. We walked around the marsh and spotted Harry, the younger Great Blue Heron. 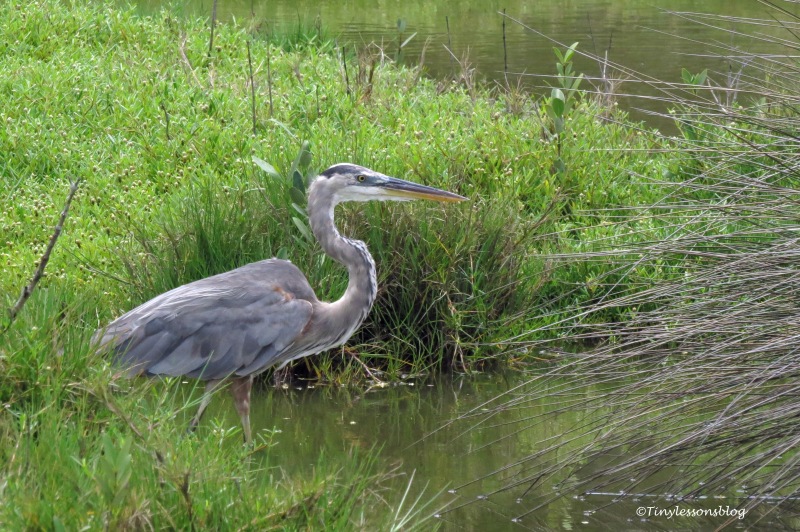 And a tiny, juvenile Green Heron, who was trying to keep her balance on a low branch. 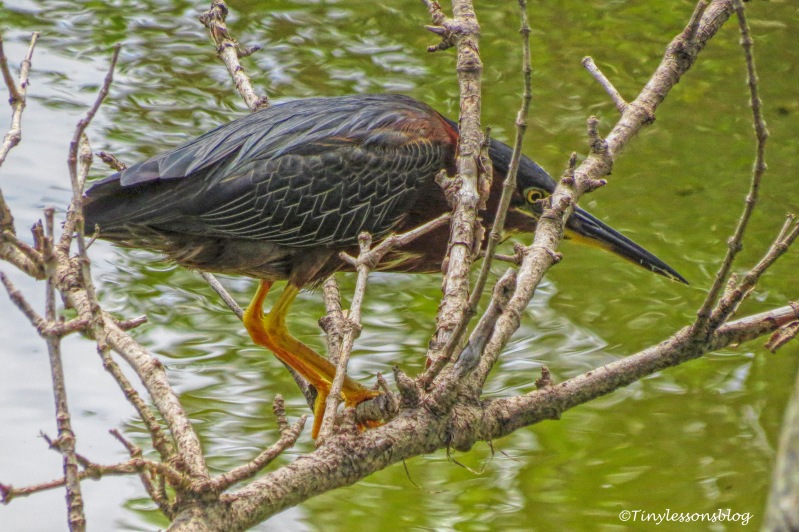 A male Red-winged Blackbird had to flap his wings to stay put on his sturdy tree stump. Normally he would land in the middle of the marsh on one of those slender bushes, but I guessed he didn’t like the idea of ‘swinging’ in this gusty wind.

When we approached the nest again, pushing against the wind, I still didn’t see the osprey chick, but a pregnant Mama Moorhen walked by.

Suddenly I heard a faint song…fish, fish. It was Bubbette! But where did the sound come from? Dylan and I stayed quite a while close to the nest looking around. Finally we gave up and decided to walk home. When on the side-walk, I looked out to the nest again, and saw her. Phew.

She had been lying low in the nest cup all along, probably ordered to take shelter by Mama Sandy. It is windy today too…and the fledging watch continues. Thanks for visiting. Happy Memorial Day and have a great week.