In the past few weeks I’ve been flying in and out of my nest on this barrier island I call home. Several work trips to big cities. Lot’s of ‘osprey time’. And bird’s eye views.

Or views from my temporary nest high up in the air in the Big Apple late in the day…and night.

So after all this flying, I have enjoyed being earth bound this past week. Watching others fly. Like Papa Stanley, who recently flew in for some Valentine’s Day romancing with Mama Sandy. Dylan and I backed off to allow them some privacy.

I think Sandy is pregnant. Her belly is growing and Stanley is already feeding her. And she’s spending lots of time at the nest every day. Yesterday she was watching intently over the bay…

…I turned around and saw Stanley flying far over the bay with a big fish.

Sandy would get it, eventually. But first the head had to be eaten. Sandy was working on rearranging the furniture in the nest, but kept an eye from time to time on Stanley and the fish on a nearby lamp-post.

This morning my assistant and I visited the Taylor Park and spotted many familiar birds. It’s funny how the birds favor the same spot, like this Anhinga who always dries her feathers at almost the same place.

She always faces the lake looking for any signs of approaching gators, but turned to look at my assistant. She didn’t move. Dylan is already trusted by these birds. Next to the kayak launch pad we usually find the Ring-billed Gull. So also this morning.

And the blackbirds are chilling out there too. The dad Boat-tailed Blackbird was reading the sign warning about the presence of gators and warned his wifey who was wading in the water nearby. Wading is a no-no according to the sign.

At the north end of the lake the resident Osprey dad was trying to spot some fish and at the south end two Great Egrets were chasing each other amid a loud argument.

We walked around the lake and spotted our usual suspects, the Little Blue Heron and the Tri-Colored Heron.

A Double-crested Cormorant with bright blue eyes was windsurfing on the lake, watching the waters carefully for any signs of gators.

And he was right in being careful. According to my latest intelligence, there are at least five gators in the lake. So far we had not spotted any of them. But we saw a large flock of American Coots in the middle of the lake and a few brave individuals were cruising solo closer to the shore.

That’s when we saw him…sunbathing on the shore.

I tightened my grip on Dylan’s leash, but since the gator posed calmly I went for a portrait too.

He was quite impressive. We walked back to the other side of the park and before going back to my car, we spotted a little head coming up for air in the middle of the green slime in a small pond. That was our tiny friend, the Pied-billed Grebe.

Today being an outdoors day for us, we also visited the Osprey couple this afternoon. They were napping together in the nest. Stanley seems to have grown a short beard. Perhaps to mark that he’ll soon be a dad once again.

While Sandy was truly sleeping, Stanley was just nodding off. He opened his eyes and told us “I see you.”

The salt marsh was fairly quiet in the middle of the afternoon, which is not unusual. The Mayor was walking around and checking his territory…

…and Mama Moorhen was gliding quietly right below the osprey nest.

I thought that was it…until we found someone hiding deep in the shadows. I had to smile. It was the younger Great Blue Heron. He didn’t want to be seen either by the Mayor or Mama Sandy. His has some unfortunate history with both of them.

I’m hoping for evidence of eggs in the Osprey Family within the next two weeks. And this coming weekend I’m off for another little nature adventure in South Florida. Stay tuned and thank you so much for visiting.

This time of the year it’s a bit easier for this night owl to get up and witness the sunrise. The silent hour when nature is waking up brings incredible colors over the bay and beautiful reflections in the clouds over the ocean. Peace reigns.

Creatures living in harmony with nature start their day. Some sit and enjoy the sunrise, others get on with breakfast preparations.

Papa Stanley returns from his first fishing trip of the day, one of many to come …

A few minutes later, he nods off on the lamp-post just outside the marsh border. As we know, taking care of babies is quite tiring for the parents. He has eaten the fish head and takes a short nap before bringing the meaty parts of the fish to Mama Sandy and the kids. 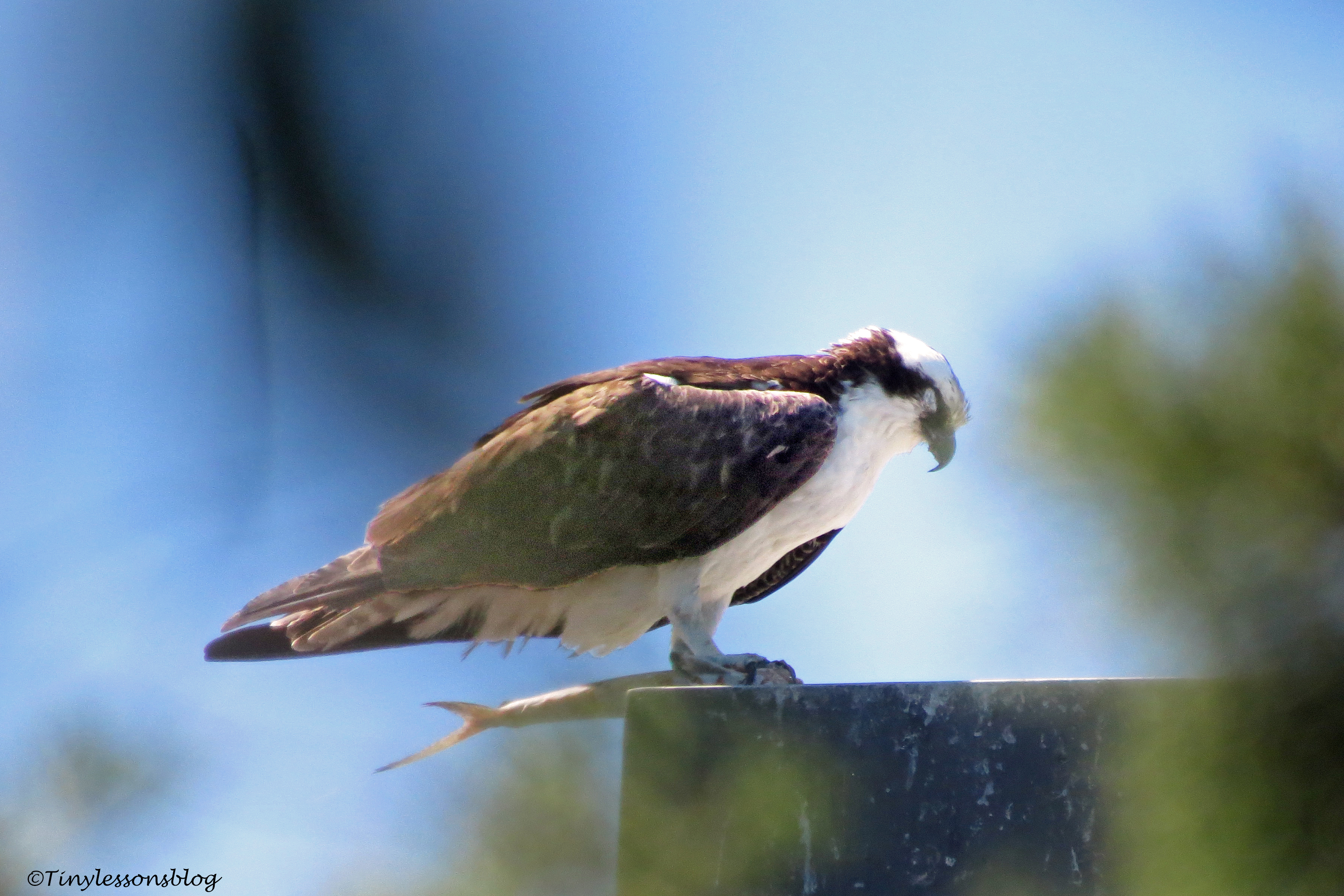 And so the day has started. Late morning yesterday, when Dylan and I were spying on the osprey family from our terrace, we finally spotted a little chick! Or perhaps two? The first born should be almost two weeks old now. Here is the first grainy family picture of 2018. We hope for better ones soon. 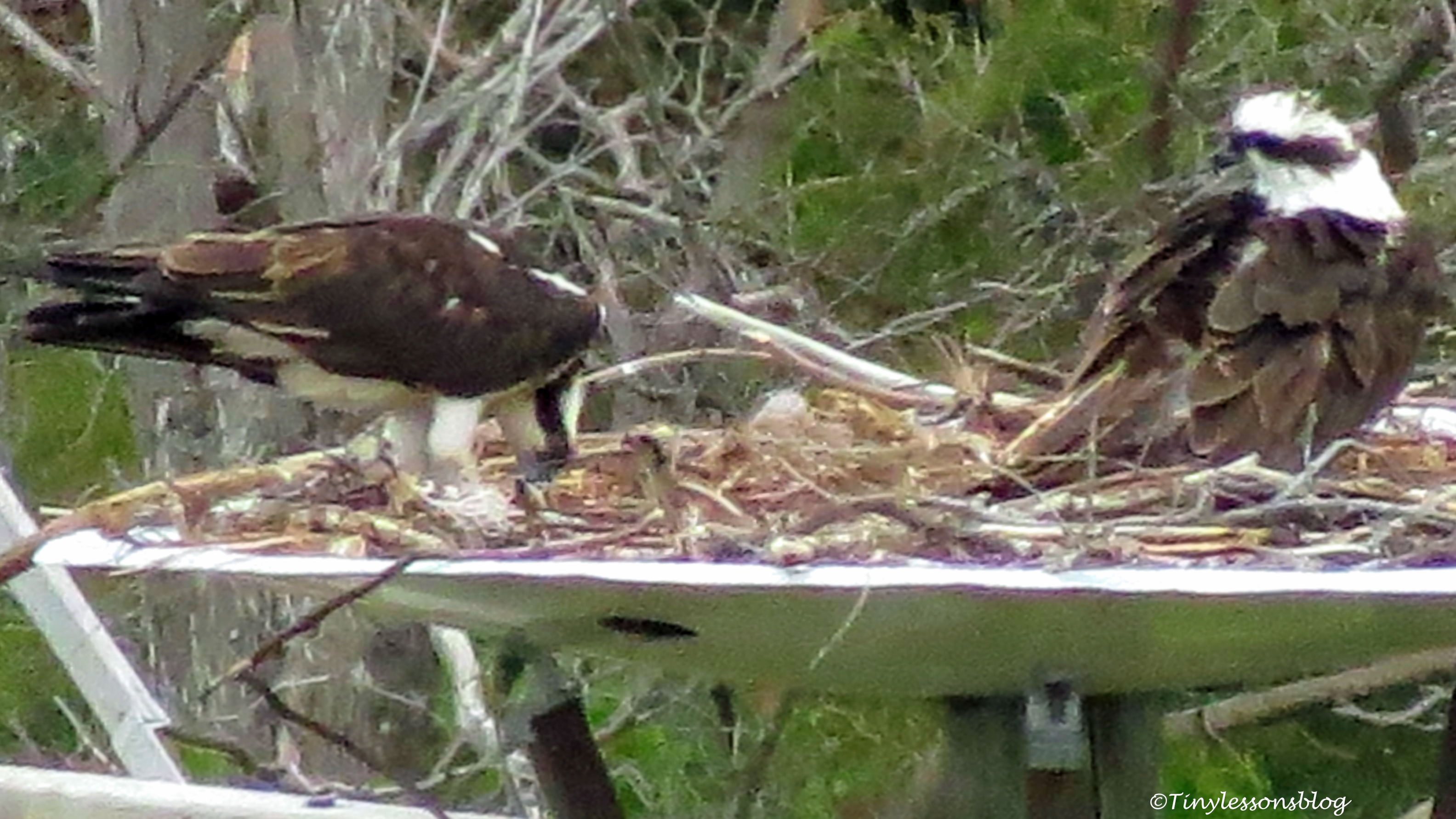 Throughout the day many other birds made appearances. My assistant and I went on a short walk in another park nearby and spotted a Limpkin, a Double Crested Cormorant and a couple of White Ibis. 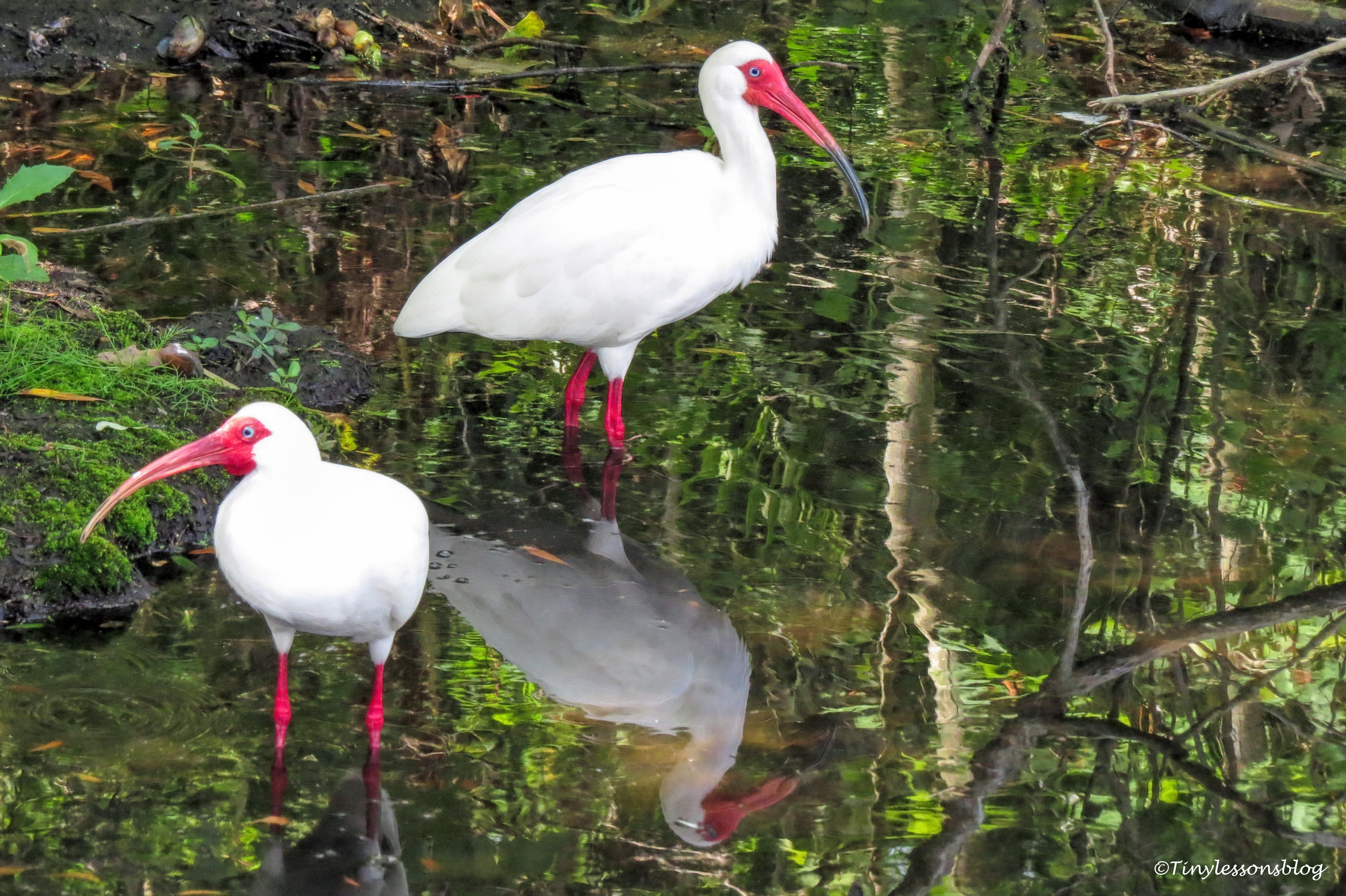 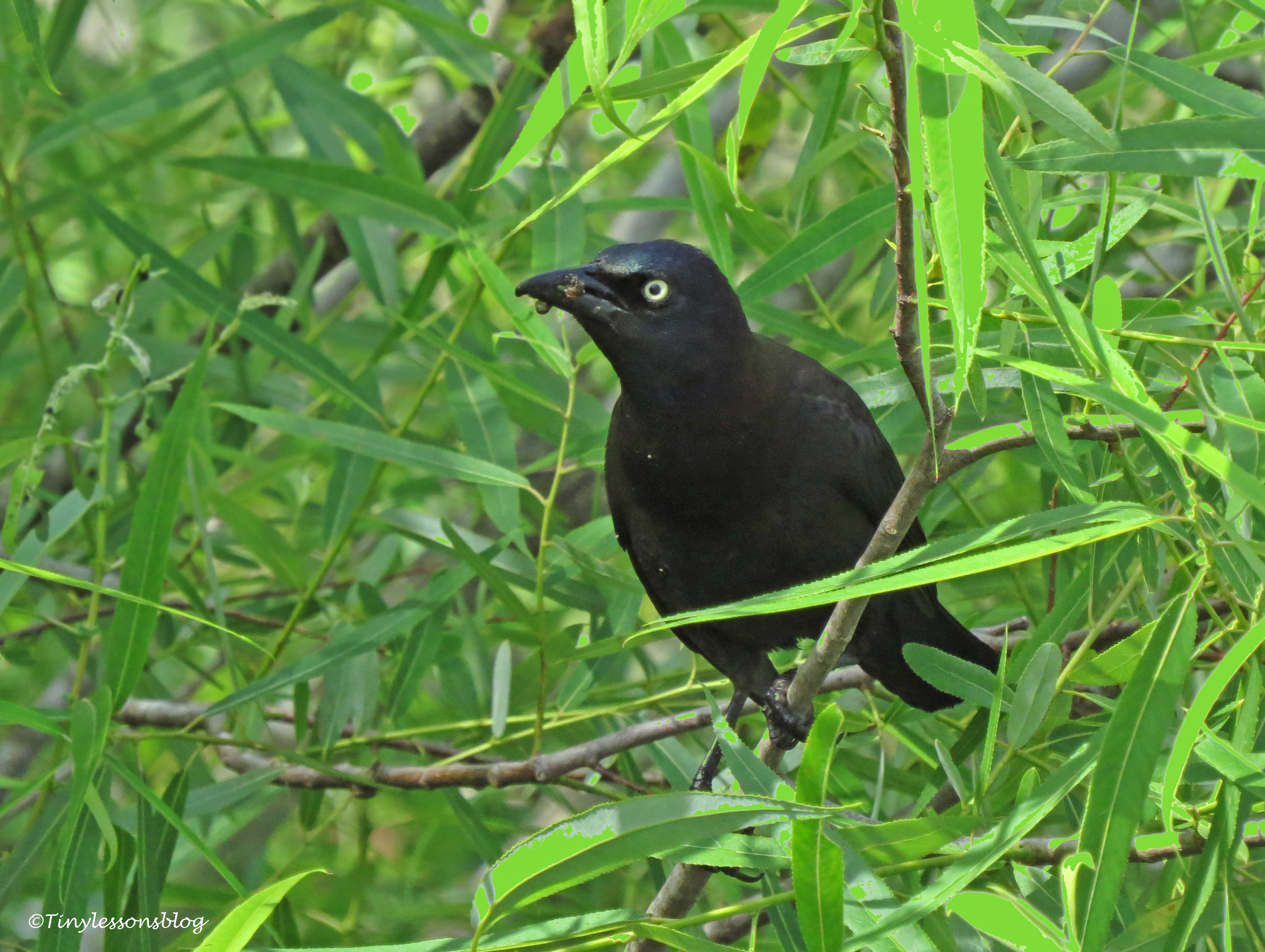 …and a few turtles enjoying the water and the mild spring weather.

Later on, around sunset time, we walked through the bay side to the salt marsh and discovered a beautiful Snowy Egret enjoying the low tide and the last rays of sun.

We noticed that Sandy was on her dinner break at their usual lamp-post table. She had left Stanley to look after the kids.

We also spotted Ms. Rosa! Long time no see. There was just about enough light to see that she still looks great.

She forageed around the shallow water as we watched her. Then ended up posing for another picture with Mr. Blue-winged Teal. 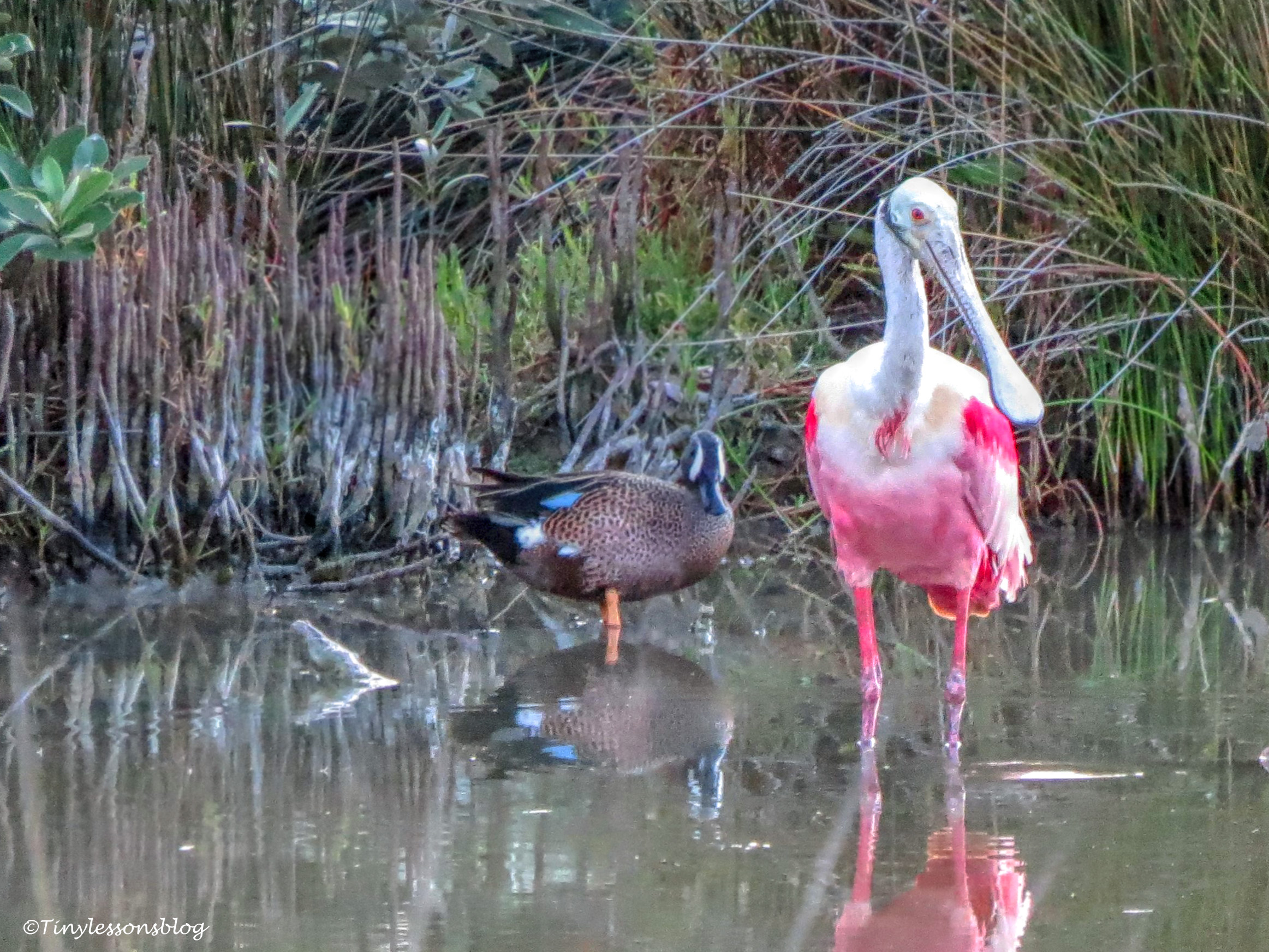 The younger GBH was watching the osprey nest, as he had been for the past few nights. But Stanley seemed relaxed. He might know the youngster has now grown up and adopted better manners. The latter was evidenced by a short nod in our direction. 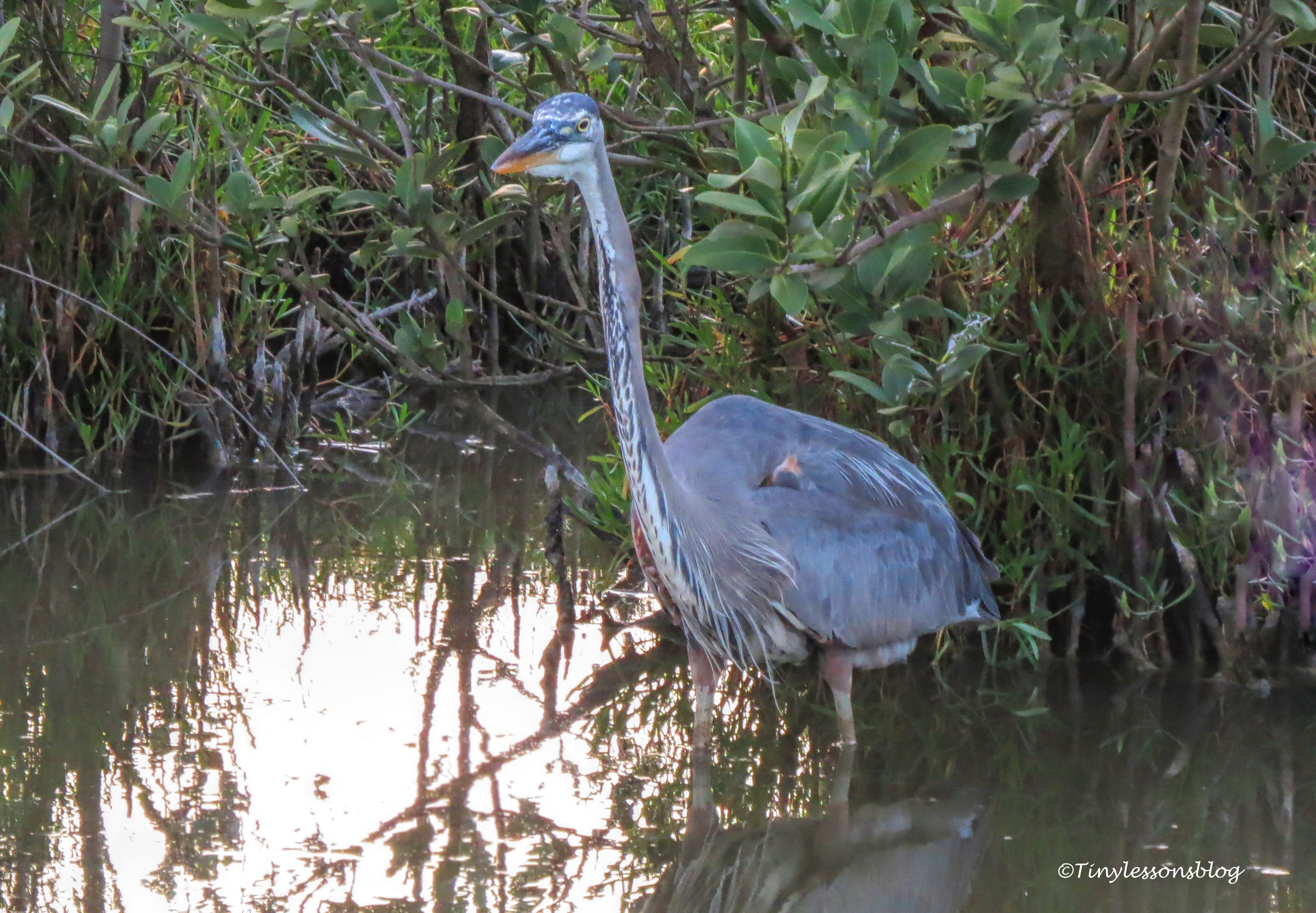 Before we knew it the sun had gone down and the marsh filled with shadows. We saw some movement in the bushes but it was too dark for pictures.

We enjoyed the peace of the evening for a while on ‘my’ bench. When we finally wanted to leave, the park gate had already closed. We had to use our secret escape path out of the park. Dylan led the way in the moonlight. He had done this before.

Thank you for visiting us between the sunrise and the sunset. And Happy Easter to all who celebrate! I leave you with my one of my favorite sunset pictures from our beach. Sail well into the new week. 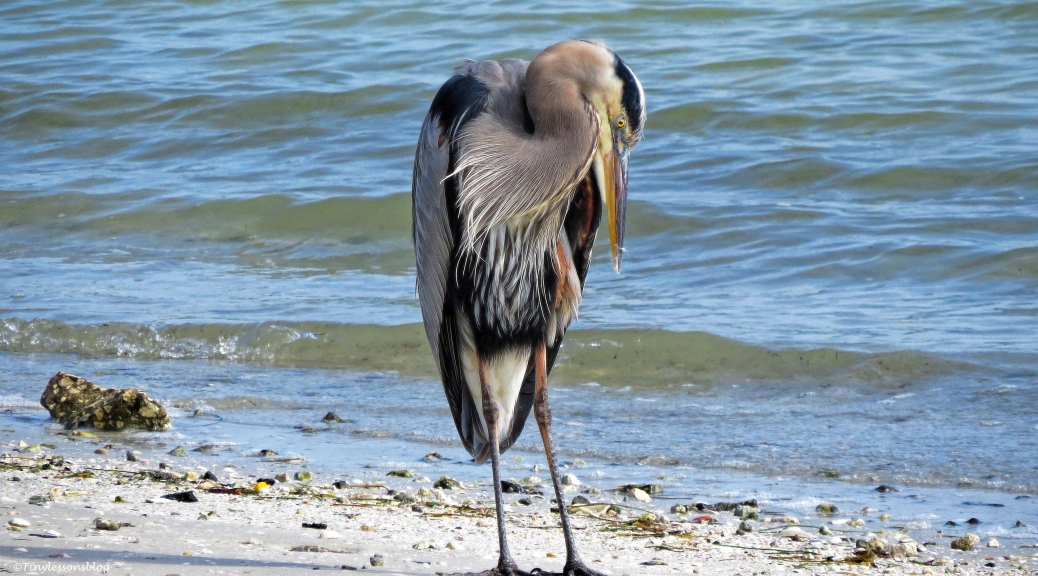 My goodness! This year got off to a flying start, in more than one respect. The days have flown by until late at night before this girl has hit the pillow. And the Kindle with interesting blog posts has hit the floor. The birds seem to have been equally busy. Like the European Starlings, performing murmurations over the bay (I only caught the tail end of it here) and occupying neighborhood roofs. 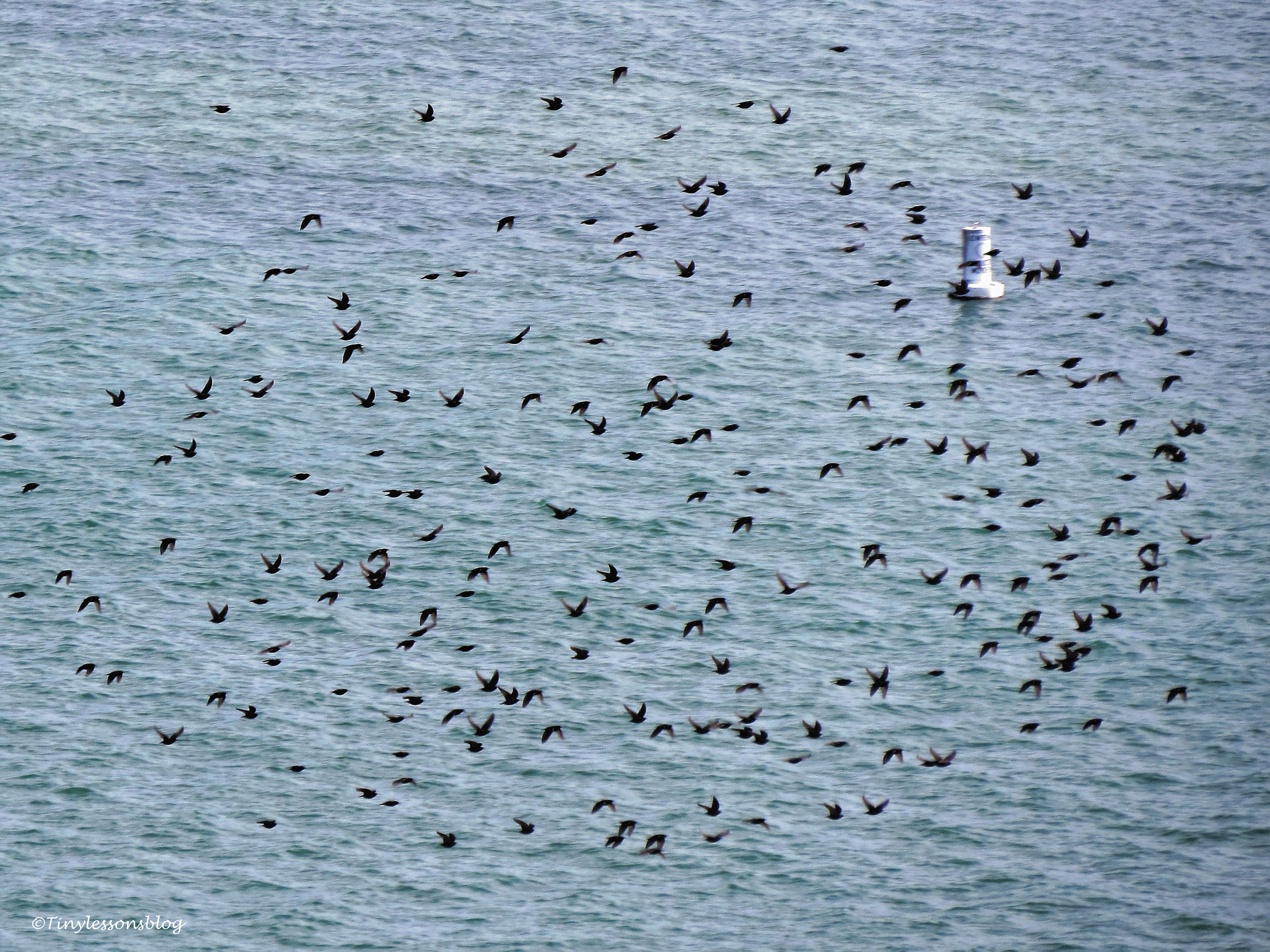 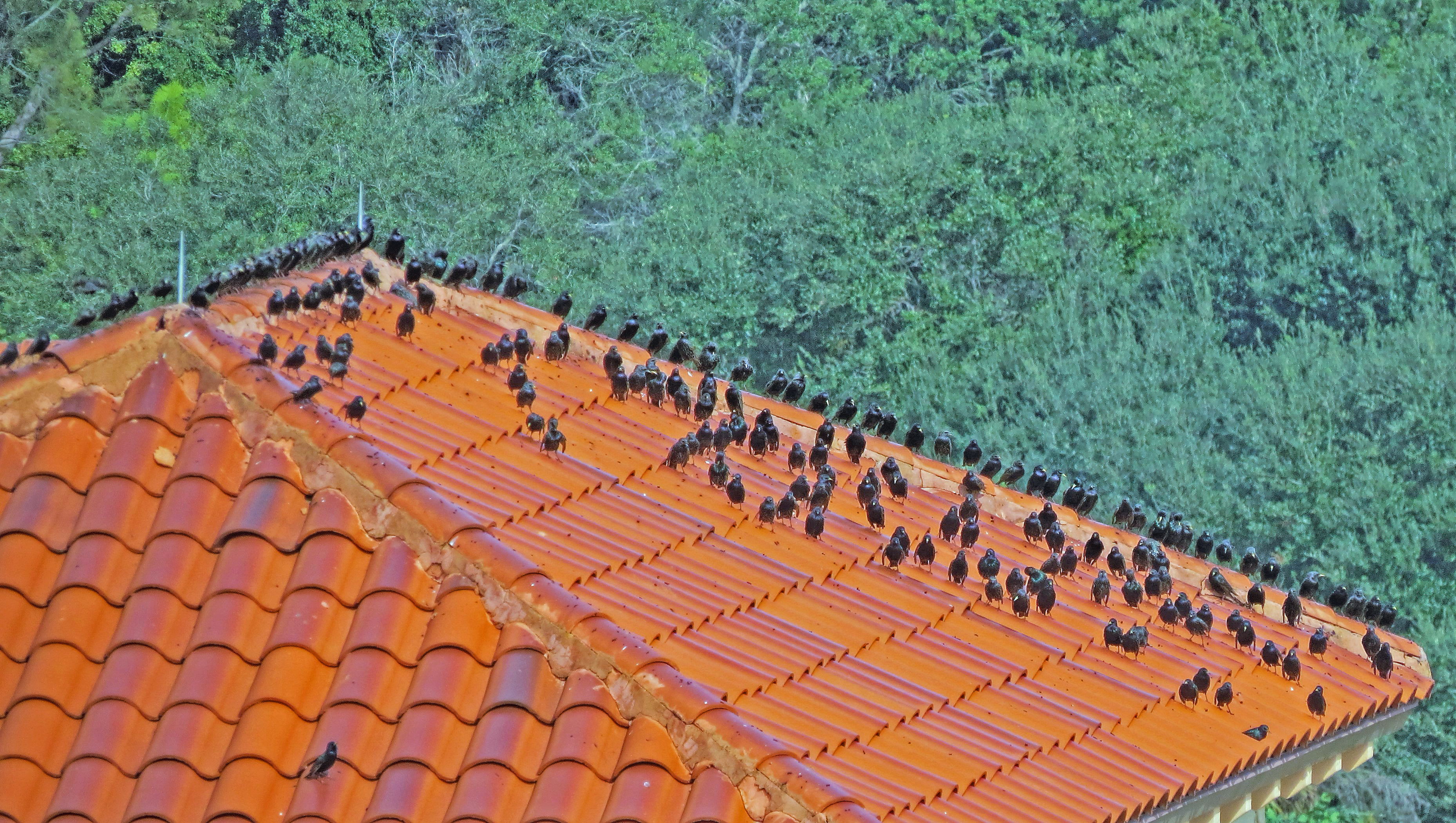 Or like this unknown handsome male, who flew repeatedly past my office window and circled over the salt marsh. He certainly made Papa Stanley keep a close eye on Mama Sandy.

During the only walk I’ve managed to take in this week, on Sunday, I found Stanley sitting with his fish on a lamp-post just outside of our garden. He had a straight line of sight to Sandy, who was at the nest. 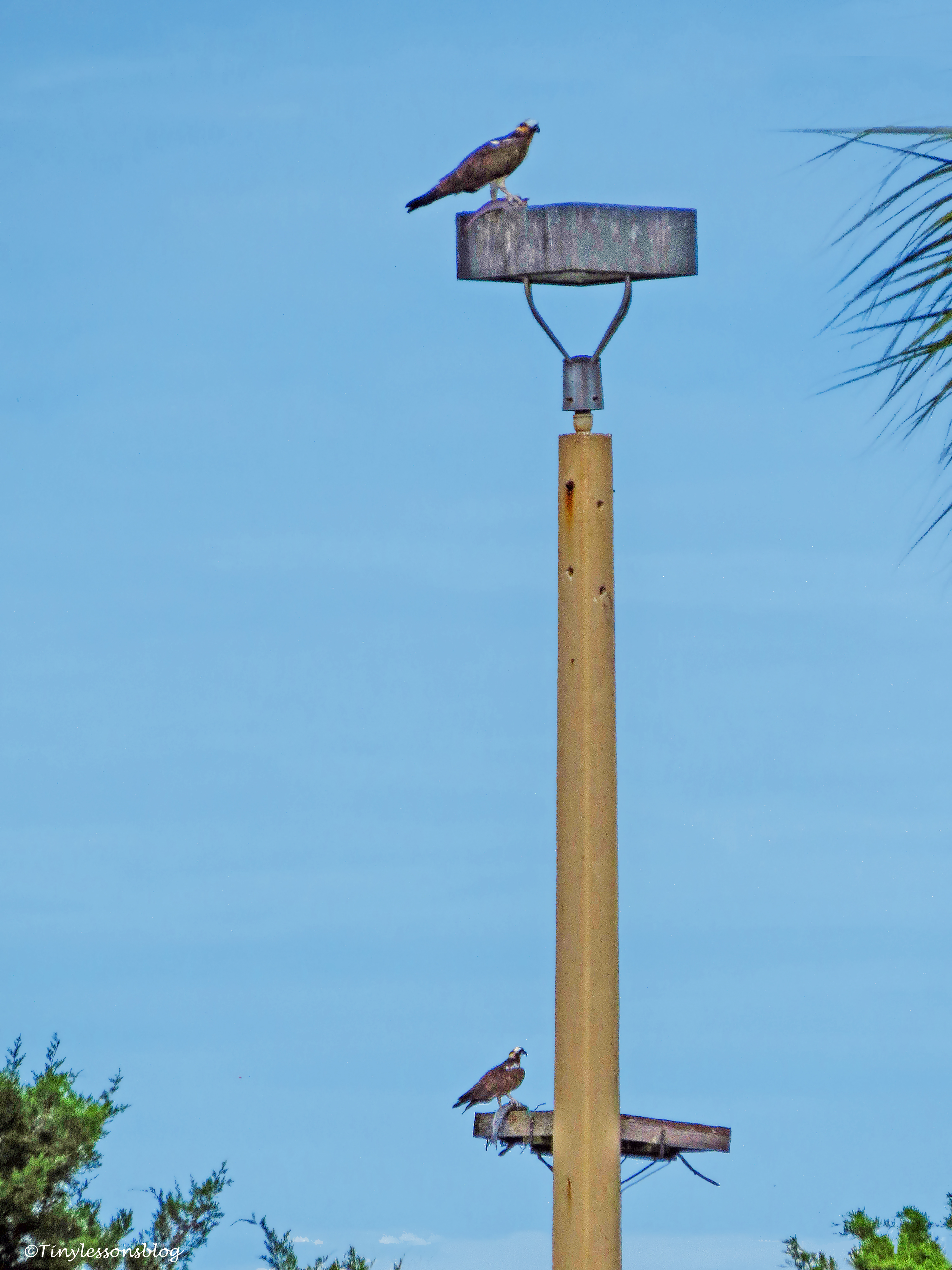 I observed they both seem to be “right handed” as they held the fish in their right foot talons.  But they didn’t actually eat. They were watching the visitor eating his fish on a lamp-post nearby. 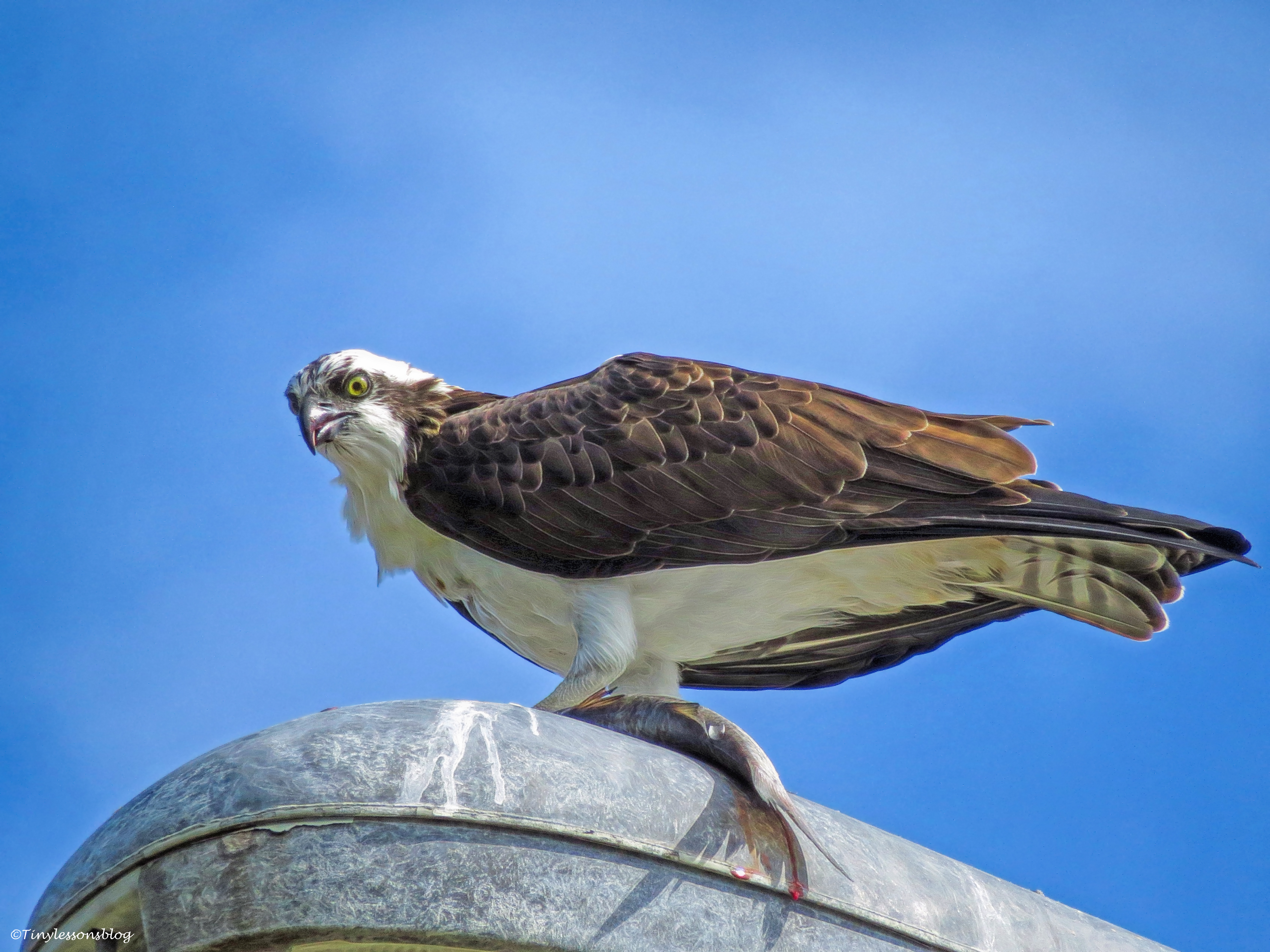 This new fellow might be a young male trying to charm “Diamond”, the young female who paid a visit to Sandy and Stanley around Christmas time. She is probably somewhere not too far from here. But if that’s the case, there’s not much hope for this suitor to get her father’s approval. Stanley was quite vocal about that.

When I arrived at the salt marsh, I found it to be much like a lively little city.  Lots of Wood Storks, Egrets, Herons and Ibis were mingling on and between the islets. Papa Wood Stork had complete control of his clan, and everybody coexisted peacefully. I have to say the birds do this better than us humans. 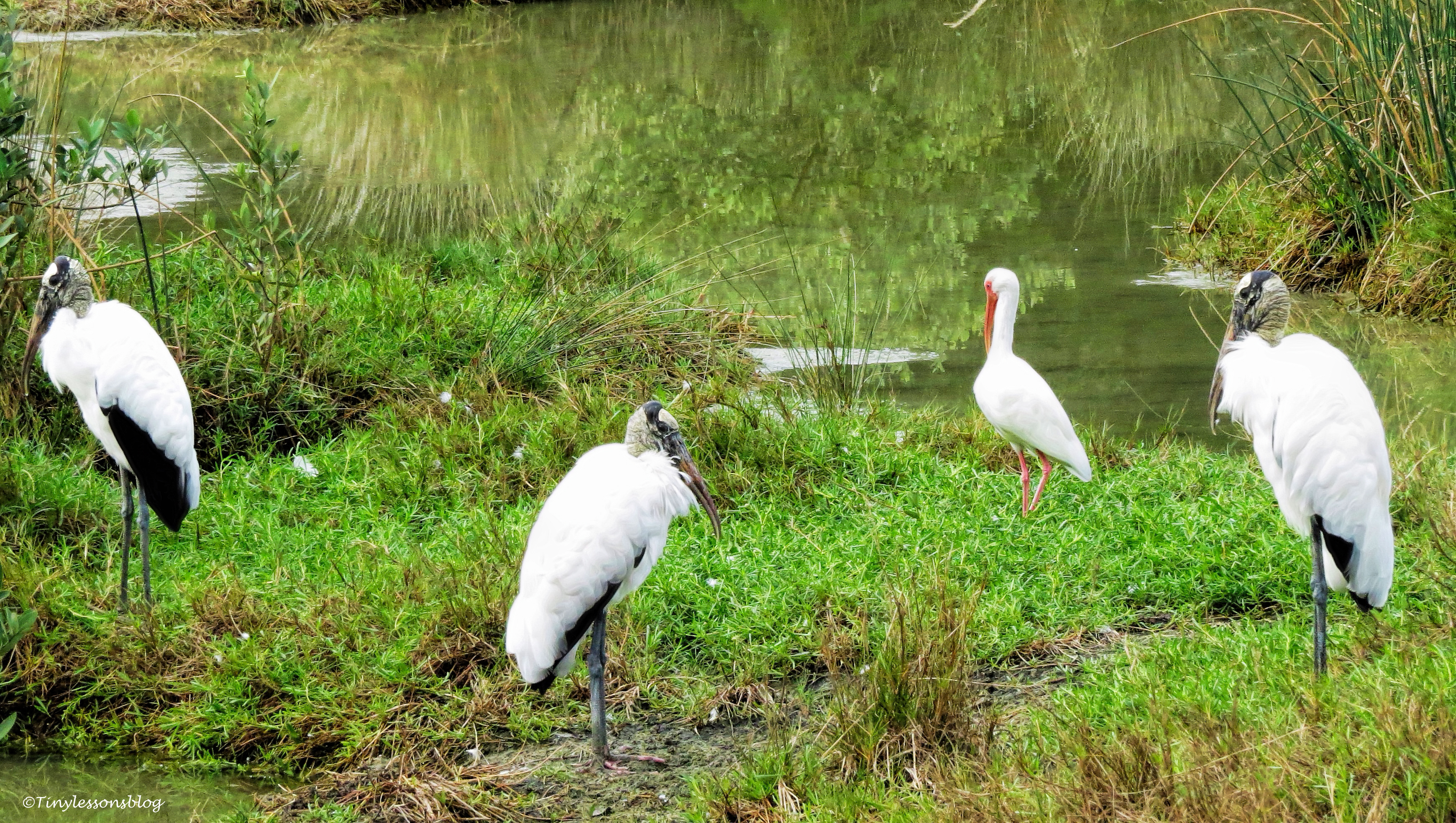 A few ibis were foraging in a neat circle in the shallow waters. Some of them circling clockwise and others counterclockwise, much like we know from human life.

Sandy was still at the nest working on her fat fish, and the Mayor presided over the crowds from his favorite islet. 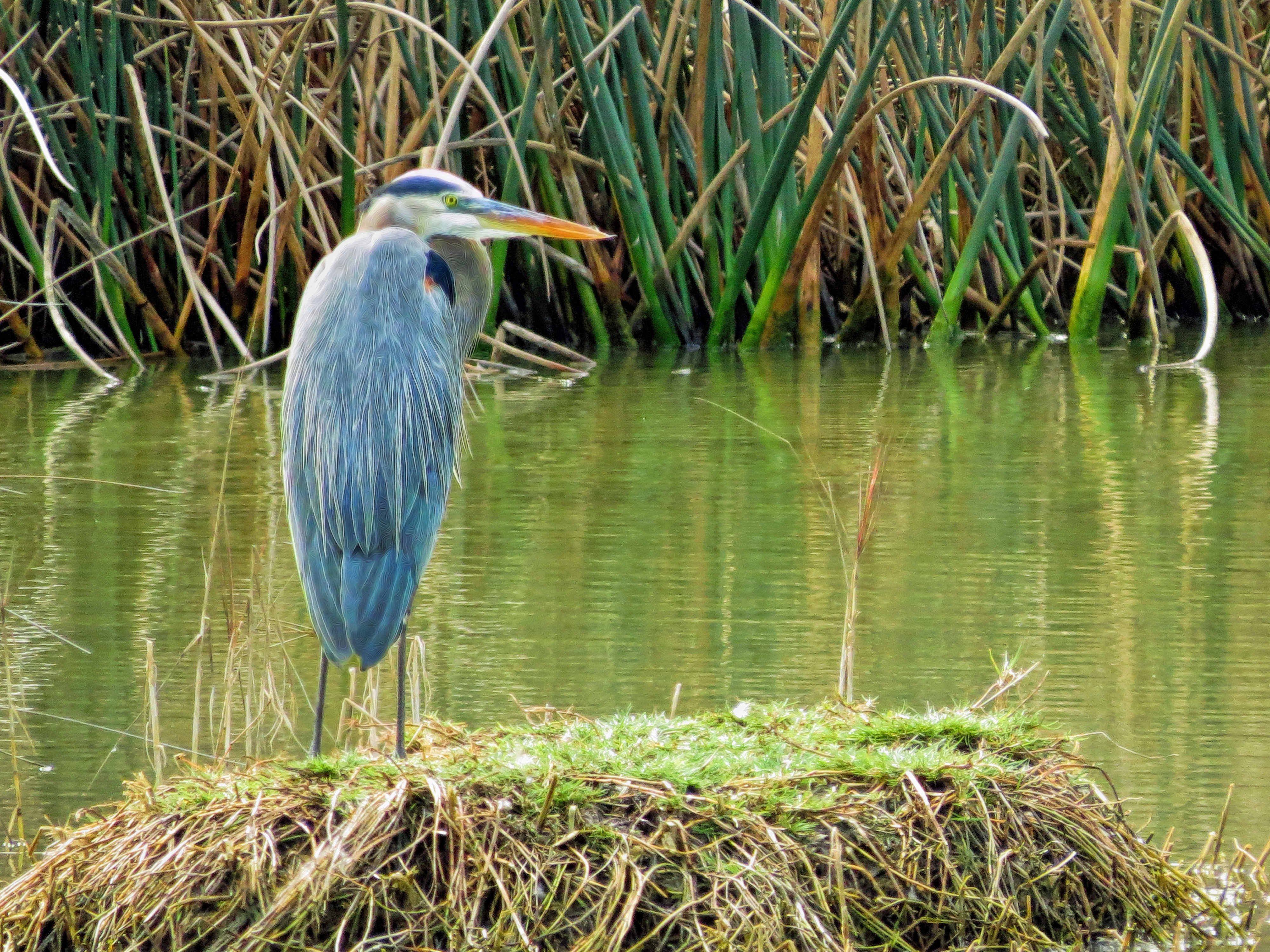 The nesting season is clearly approaching. The Egrets are already growing their breeding plumage, and lots of courting was going on.

The one seemingly not interested in such adult behaviors was the juvenile Black-crowned Night Heron, who was trying to hide in the grass.

Pop Yellow-crowned Night Heron seemed uninterested as well. He had a potential partner hiding in the branches of a tree right next to him, but he was fast asleep. Or maybe he was just pretending? Peeking at her with one eye? 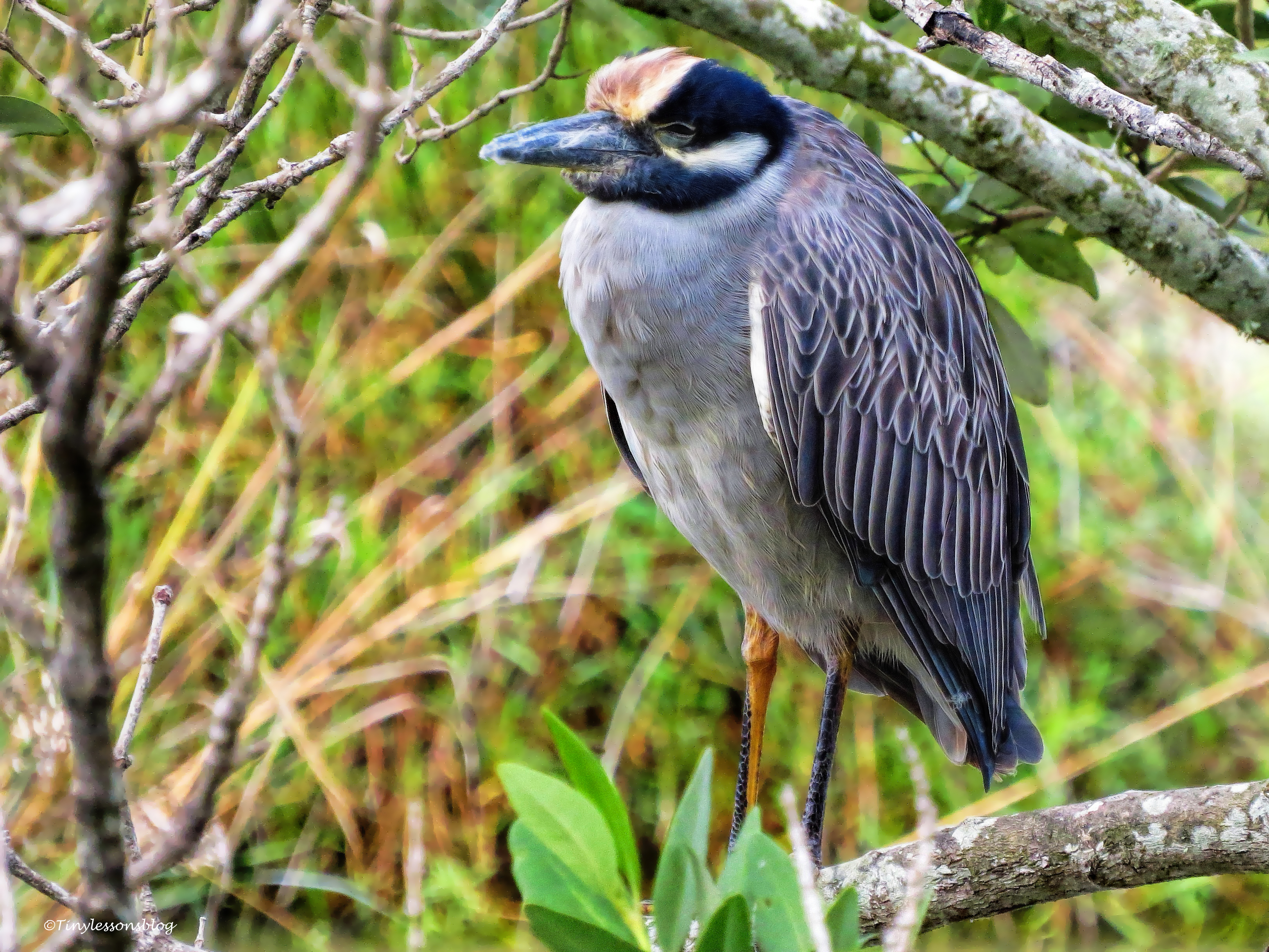 Suddenly the Mayor decided it was time to change scenery. He flew on the other side of the marsh towards the bay. 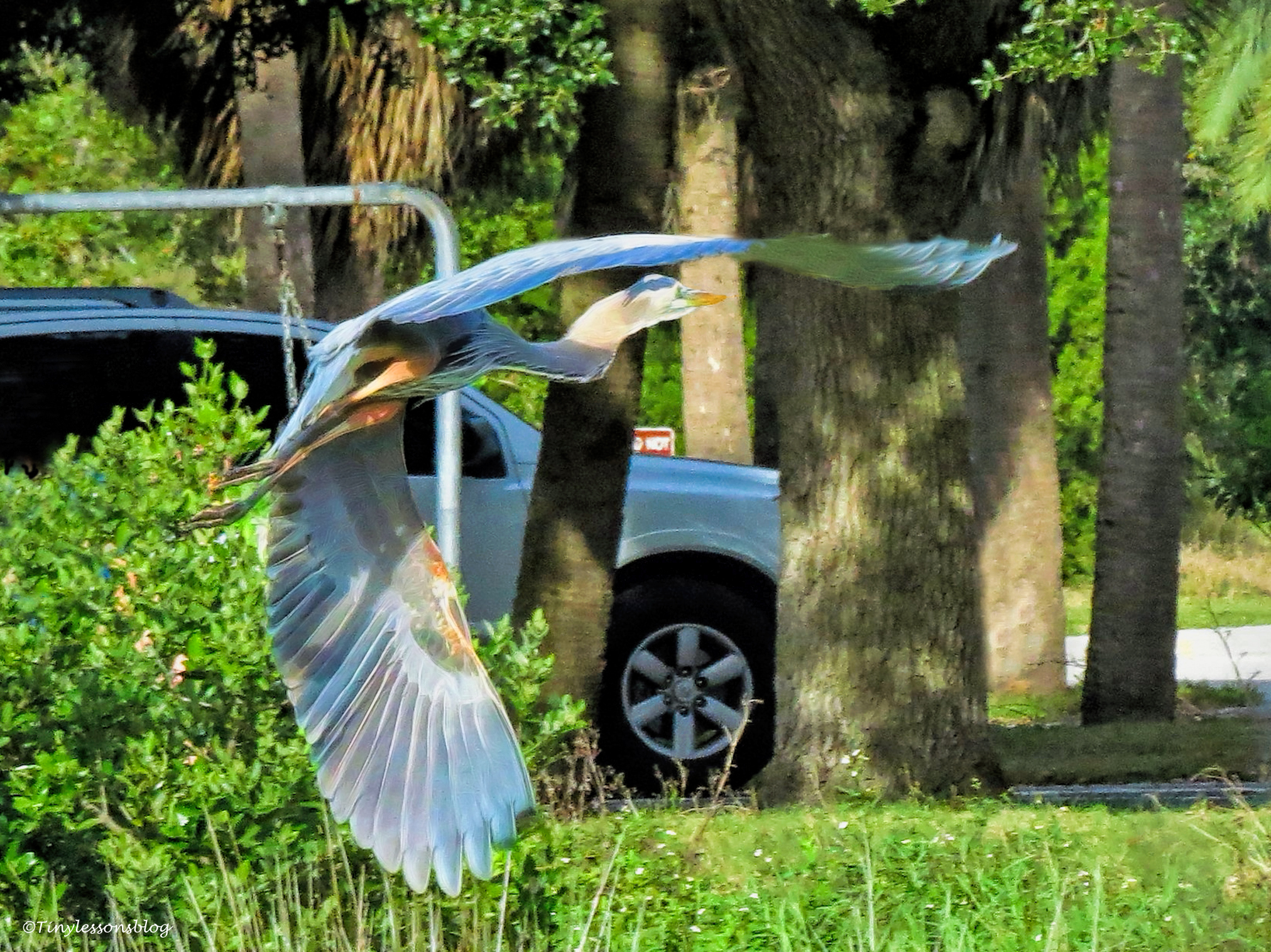 I decided to follow him to check if that beach would be equally crowded. On my way I spotted the European Starlings again. They had now gathered in a huge tree close to the park entrance. 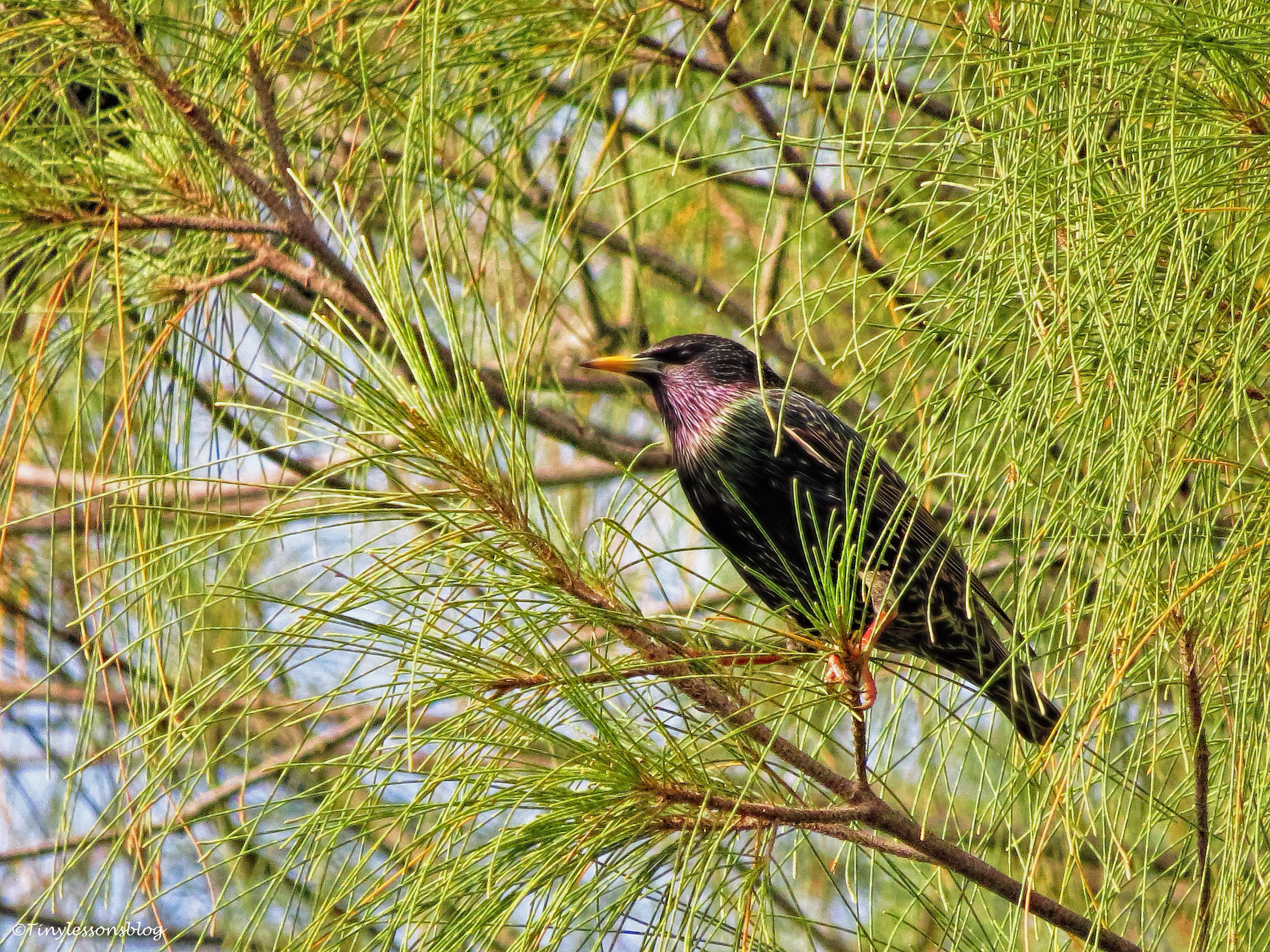 The Mayor acknowledged me with a sidelong glance as soon as I arrived to the beach on the bay side. 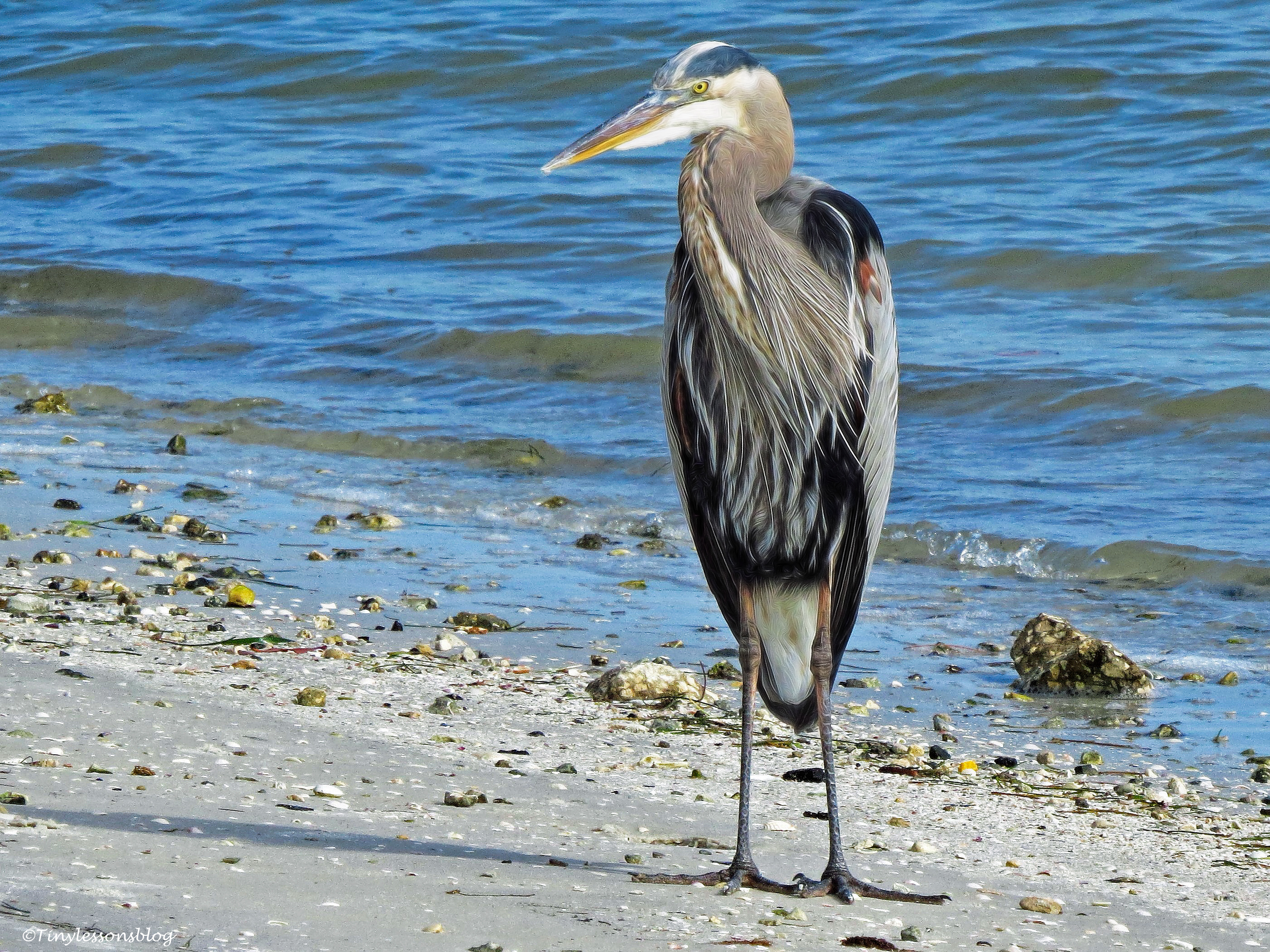 That beach was fairly quiet. Only a Double-crested Cormorant and a few Gulls kept him company. I guess he needed some peace and quiet away from the crowds.

Walking home, I spotted another beautiful Snowy Egret, a few Willets, and my faithful friend, the Northern Mockingbird. 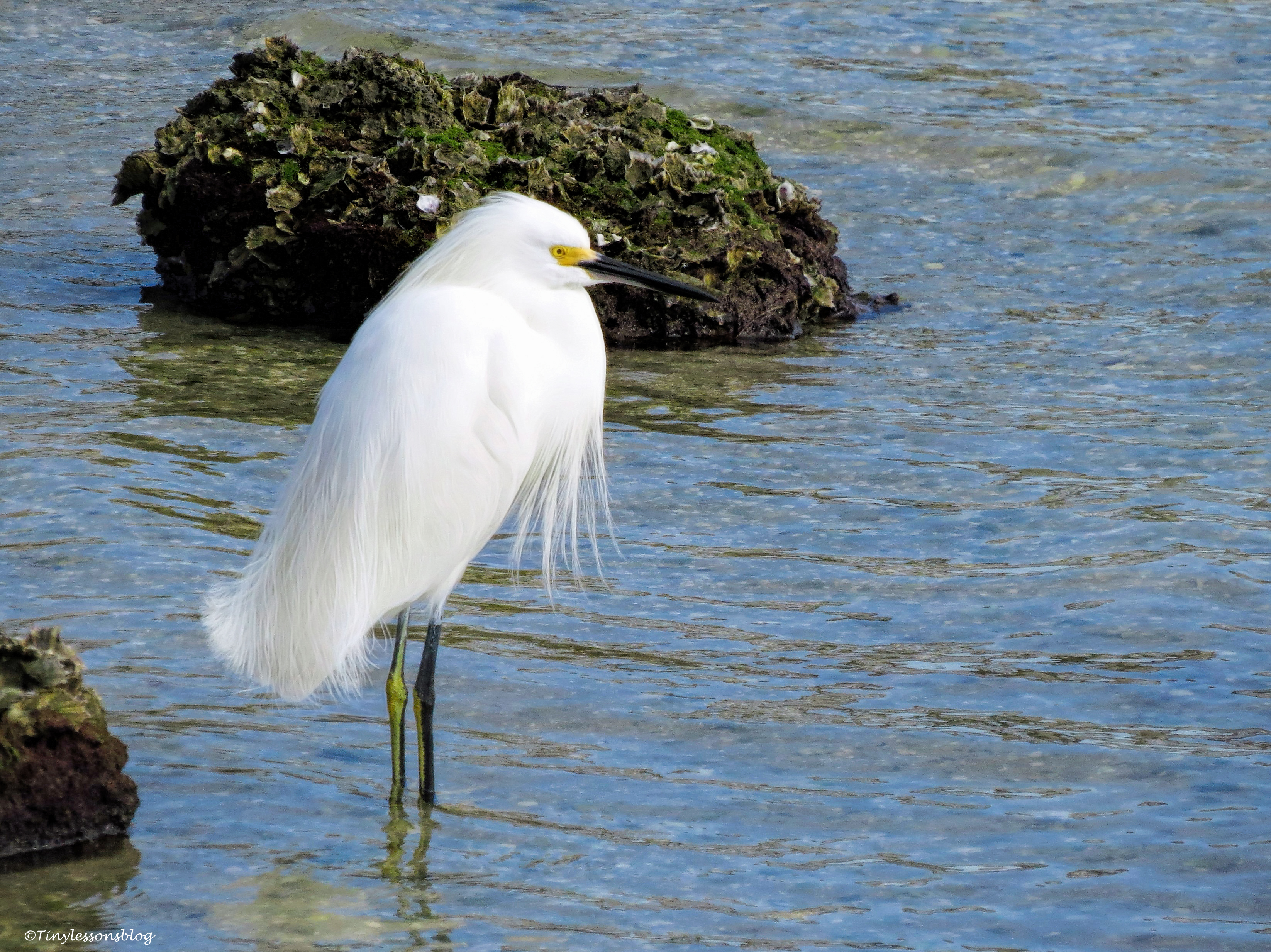 Bougainvillea blooms greeted me at the corner of our garage when I arrived home from my 3.5 mile walk. Then thinking I would repeat the walk the next day again. But it was not to be. 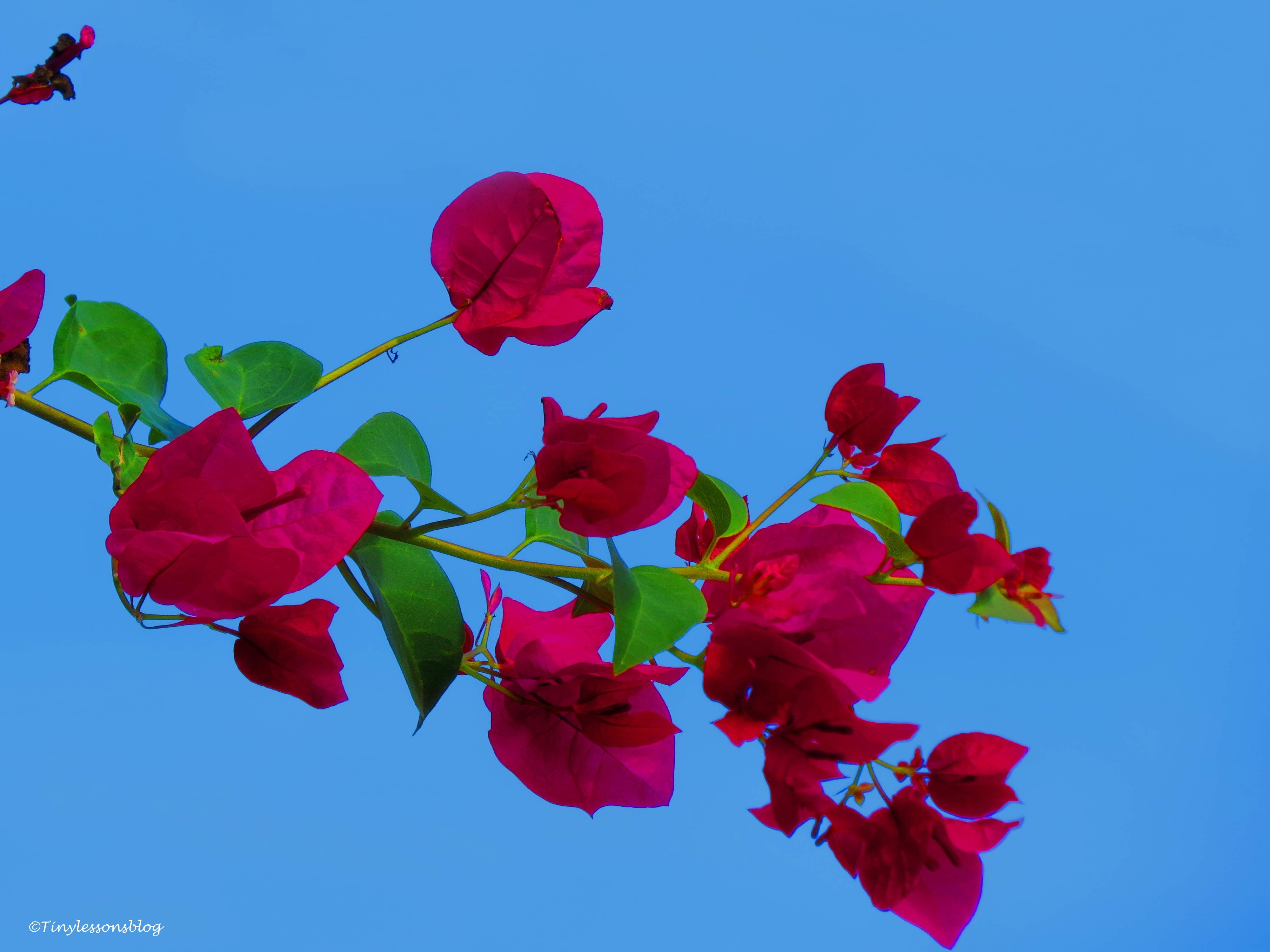 Unfortunately it may take another week or more before I get to see my feathery friends again. I have some travels coming up starting tomorrow morning. I hope your year is off to a good start, and thank you for coming along.

You can find many other circles here. 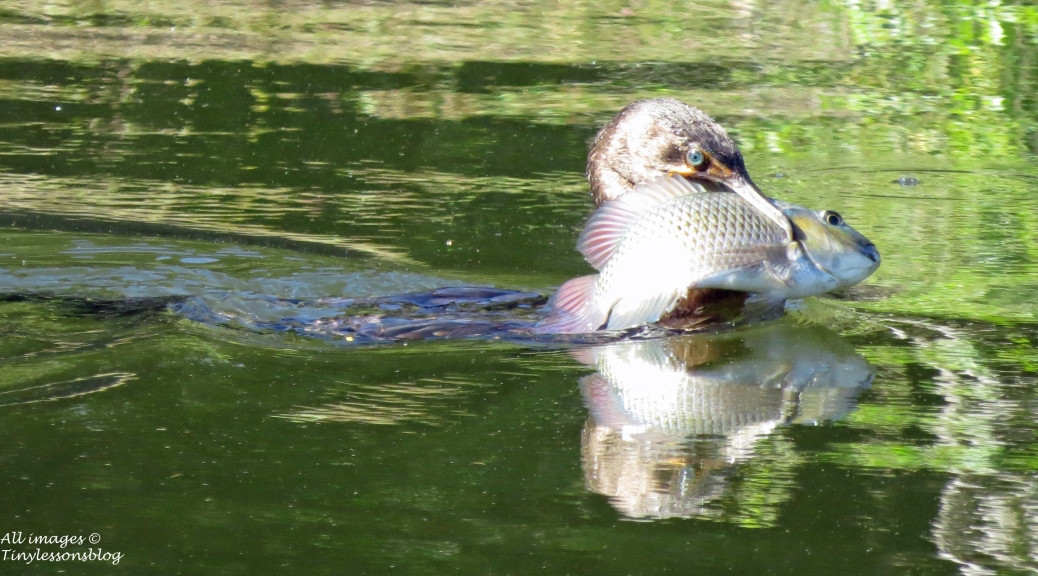