It’s election day. The salt marsh is right next to our polling place at the Sailing Center. 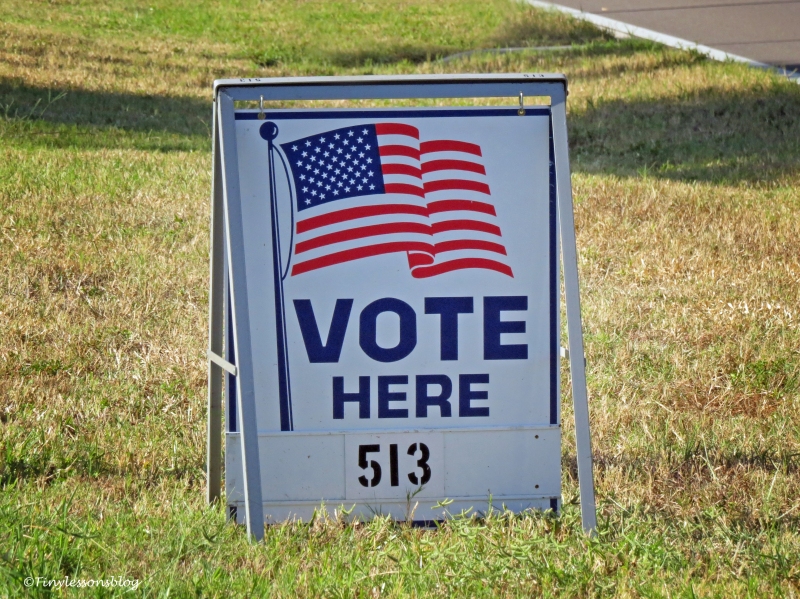 Early this morning as voters started to stream in, Papa Stanley was stationed right there, on the wind metering device, keeping watch. He was very alarmed, to say the least.

To my relief I discovered that he was alarmed about something completely different. Another male osprey flying over the salt marsh, where Mama Sandy was minding the nest. 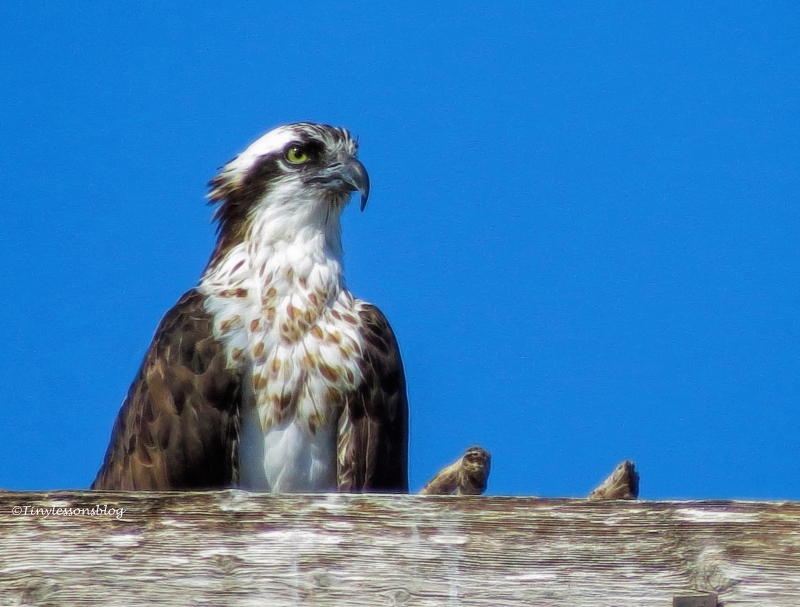 Sandy and Stanley are dating now, and he doesn’t venture far from her side. I bet he is already rehearsing his proposal dance to be performed in late December. In any case, the bay side was as lively as the polling place. Pelicans had gathered around the pier, and lots of fishing was going on.

I decided to visit the salt marsh. And the turnout of birds did not disappoint. Although Mama Sandy had now flown away from the nest, there was a lively crowd of ‘big boys’. Like the Wood Storks.

And the Great Egrets. Although a few of them decided to move to the bay side. More excitement there, I assumed. 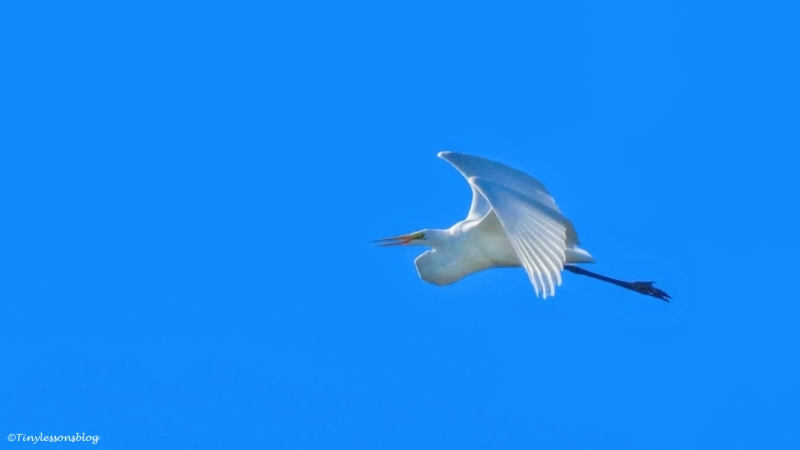 But most importantly, the Mayor was in the ‘office’ on his favorite islet. He was keeping an eye on everything. 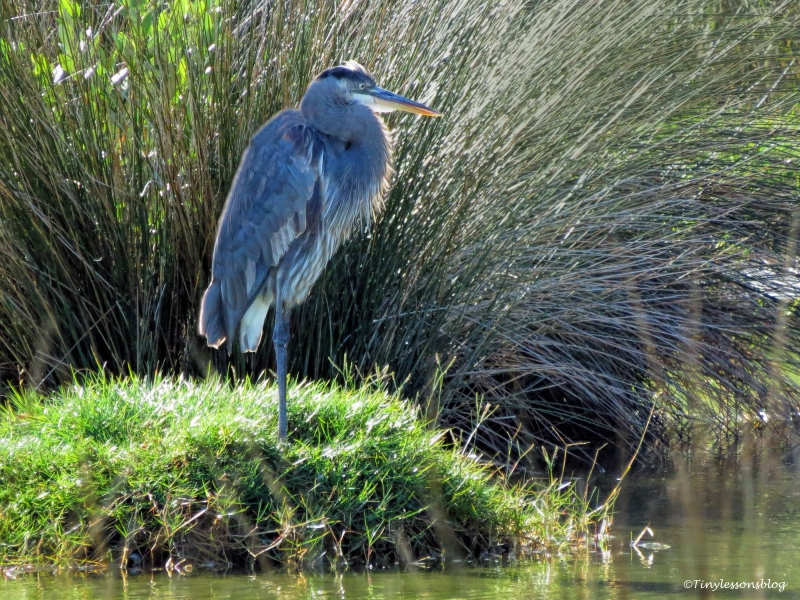 In addition to the big guys, I spotted some smaller fellows. Like this Black-crowned Night Heron. He was trying to take a nap, apparently unsuccessfully, in the bushes below the osprey nest.

Then my attention was drawn to a rare visitor, a Belted Kingfisher. He was flying and hovering above the marsh for a long time, and finally sat down to rest in the middle of the marsh. 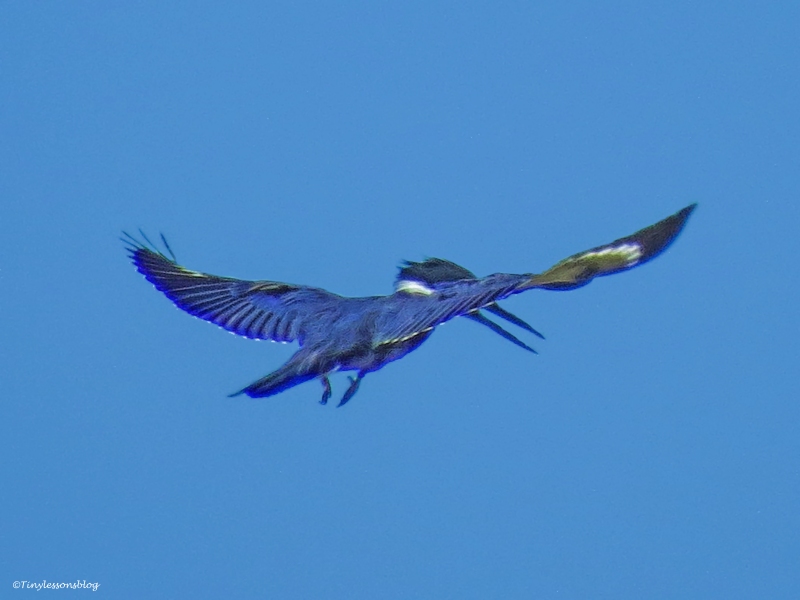 I decided to take a swing on the beach. But I felt watched. A drone was circling above the beach. It was watching me, so I decided to watch it too. Tit for tat.

I didn’t like the drone and decided to return to the salt marsh. Just in time to see Mama Sandy return to the nest. I was secretly hoping she would not like the artificial ‘bird’ in the skies above the beach. But had to assume she had not seen it. 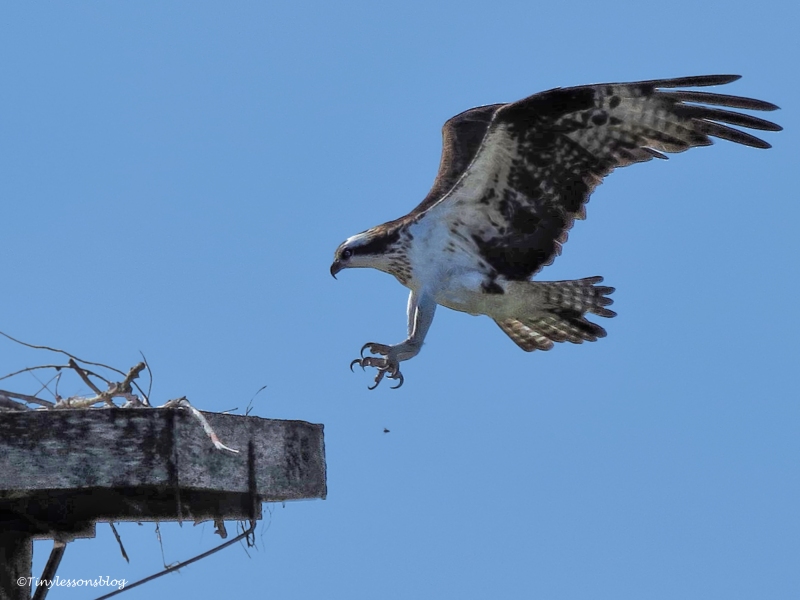 She had no fish. I believe she had already eaten her breakfast and was just taking an extra exercise round above the bay.

I then spent some time observing a few very small birds. They moved fast, but finally one of them sat down for a photo shoot. After looking at all my pictures, I think it might be a Pine Warbler, but stand to be corrected by friends who know these small birds much better than I do. 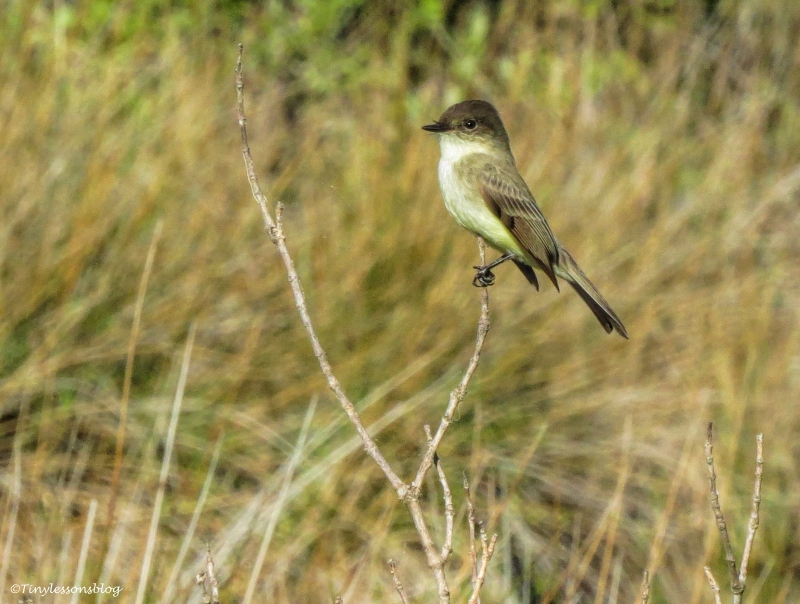 After getting my shot, I decided to walk home. Just when I got onto the street, I saw Papa Stanley fly over my head. With a fish. He landed on a lamp-post close to the marsh – with a direct line of sight to the nest where Mama Sandy was perching. Everything was in order.

Whatever happens tonight, I hope we will find peace. Individually and collectively. 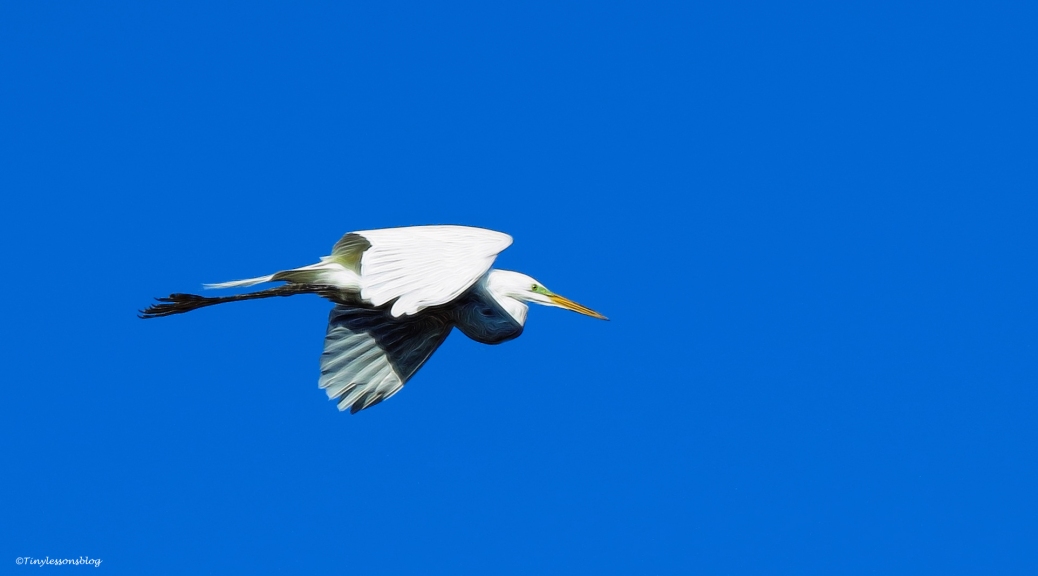 It’s winter in Florida. 39 F (4 C) with strong winds made me dig for my 25 years old, lined bomber jacket. It’s known to keep me warm whatever the knots on the ocean. And soon after sunrise today it was exactly what I needed. I wanted to take a quick walk to see how my friends at the salt marsh were dealing with the cold and the wind.

I couldn’t walk there through the beach as the wind was kicking up a sand storm. Fine sand doesn’t mix well with my gear, or my hair for that matter. So I quickly zoomed out to get a picture of the rough seas, and then decided for the bay side. 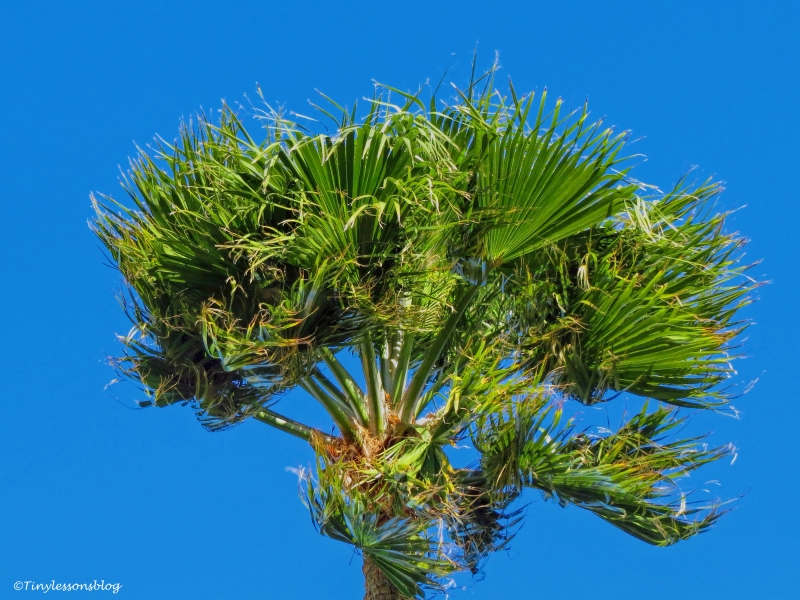 The palm trees were bending in the wind, their “hair” flying wild. I thought the marsh residents would all be in hiding, just like the people seemed to be. But I was wrong. The salt marsh was anything but quiet. Just when I arrived Mama Sandy flew into the nest where Stanley was waiting.

Then they perched there together, their heads facing the wind, most of the time. 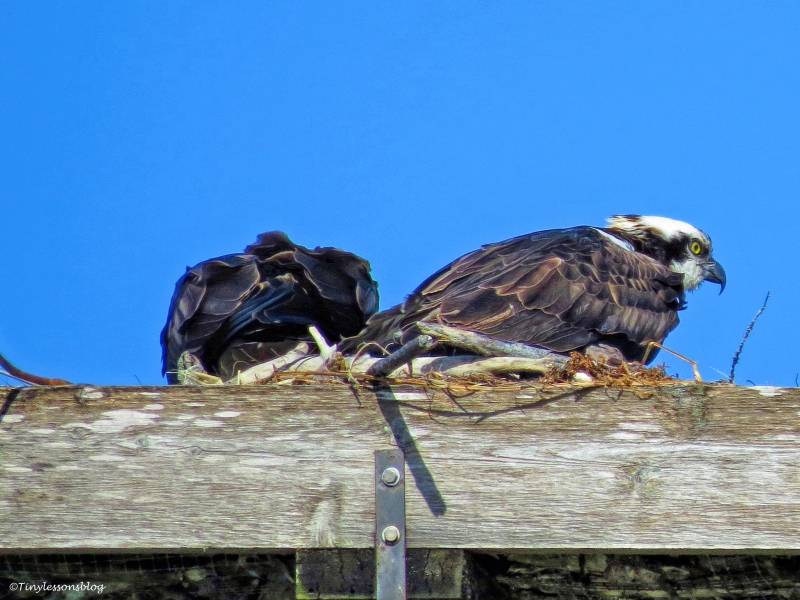 Sandy might already be pregnant. Last year she laid eggs around February 21st, but this year I’m thinking it might happen earlier. 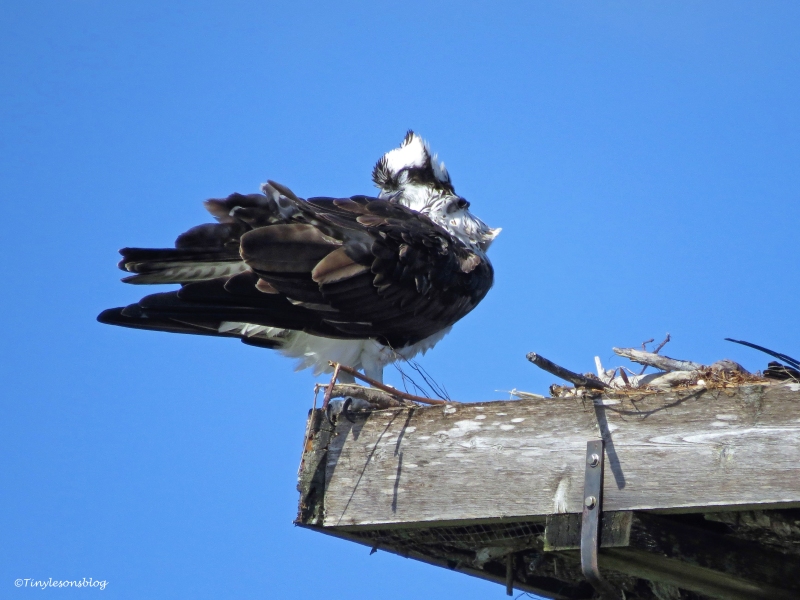 Sandy took advantage of the wind to get her feathers clean and beautiful. Her agenda was all about love. And Stanley didn’t disappoint. 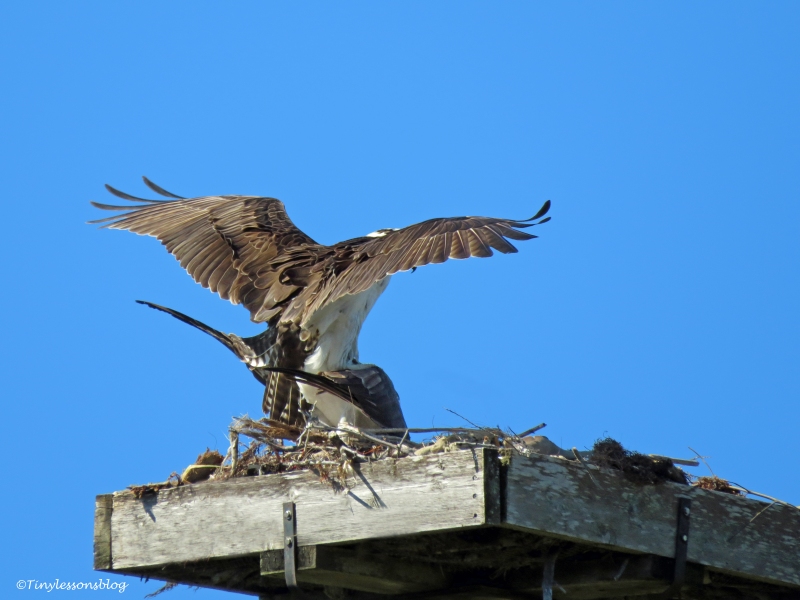 Maybe when I’ll return from my trip in two weeks time I’ll find them incubating. That would be exciting.

I continued my walk and found more romantic agendas. Two Great Egrets were taking shelter in the bushes below the Osprey nest. Both in breeding plumage. Long looks were exchanged, beautifying was going on and courting was definitely on the agenda. 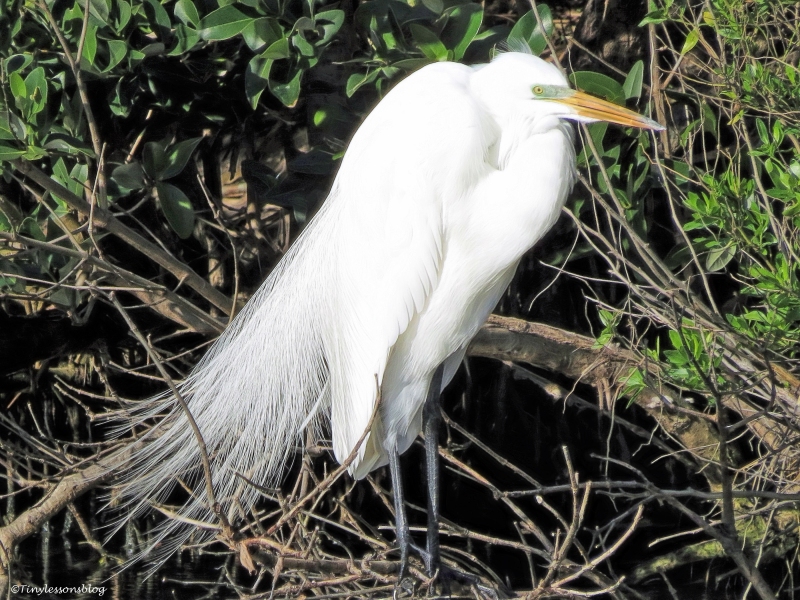 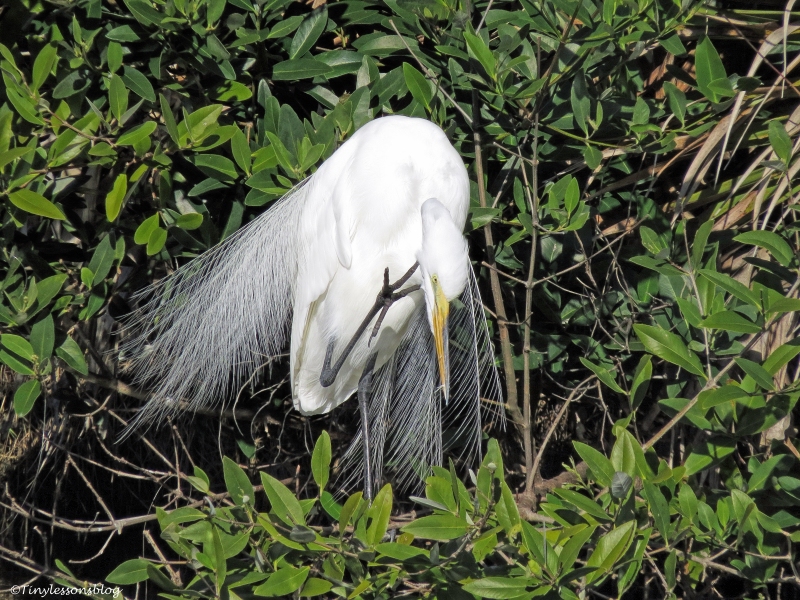 Did you know that in addition to the long plumes, a patch on the face of these birds turns neon green for the breeding season? That is clearly visible on the male above, and on the flying bird in the featured image. I think that’s quite cool.

There were several other birds in the vicinity, like Night Herons and Snowy Egrets, but they were deep in the bushes seeking shelter from the wind. This little Tri-colored Heron had dared to step out into the sun. He had only one agenda. To get warm. 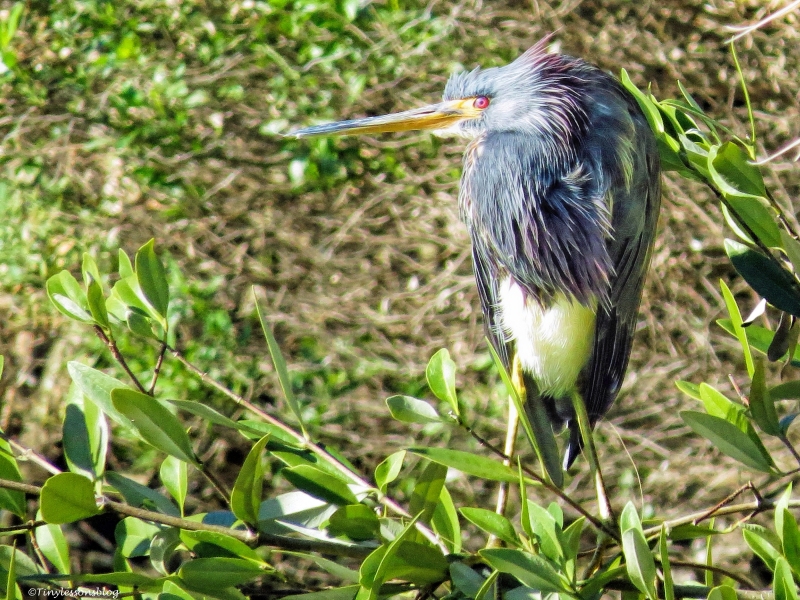 But sometimes the agendas collide even for birds. And some fighting ensues. Like for these young Great Egrets. After a loud exchange and some aerial acrobatics, the loser left and flew away over the dog park. 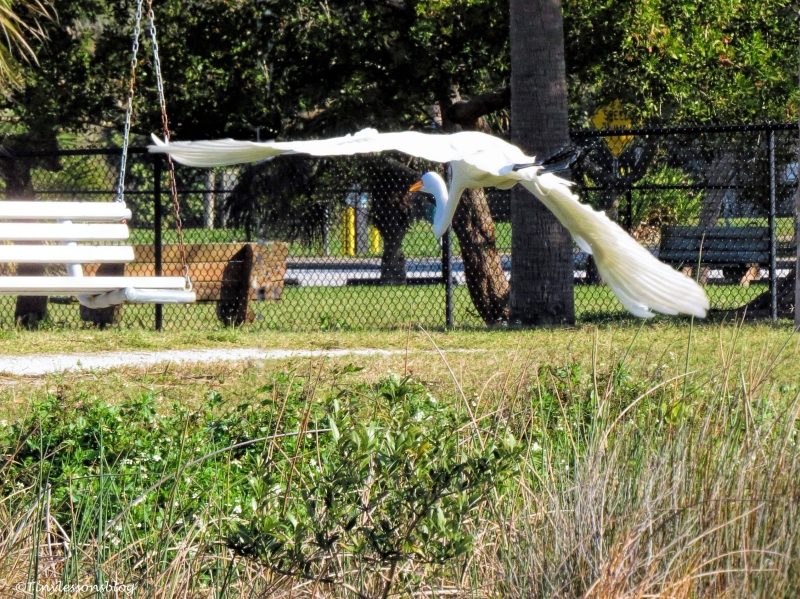 Maybe it was about this young lady, who was approached by the young Great Blue Heron.

He was talking to her, and it looked like he was fishing for votes in a bid to take over the Mayor’s Office. The Mayor himself was a bit further out warming himself in the sun, and didn’t notice this youngster with a devious agenda. 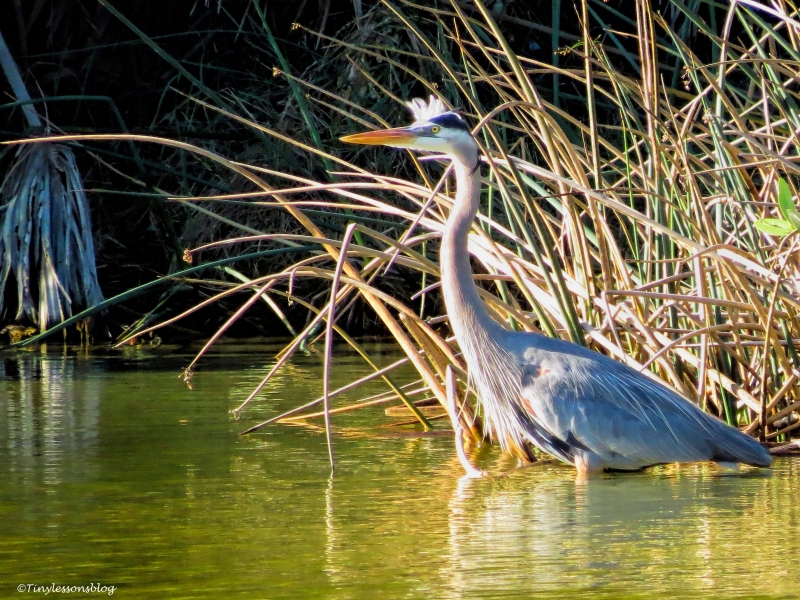 Walking back from the beach end of the marsh, I spotted a beautiful female Belted Kingfisher. She was exactly where I had first seen the male last Sunday. Maybe they have a nest building agenda? That would be nice. New residents are always welcome.

Just when I was leaving the marsh, I found my friend, the young Muscovy Duck. He was airing his colorful feathers, but kept an eye on me at the same time.

That was it for today. And for the next couple of weeks. In the meantime I’m hoping to capture at least one tiny bird of a different origin. Or maybe a lion. If I’m really lucky. I’ll try to peek into the blogging world whenever time and connectivity allows for such a luxury.

Thank you for coming along! Have a great week everyone.

She’s been looking worried, Mama Sandy. She hasn’t stayed much at the nest since before the storms last weekend. And when she’s been there, she’s been calling and looking around in all directions. 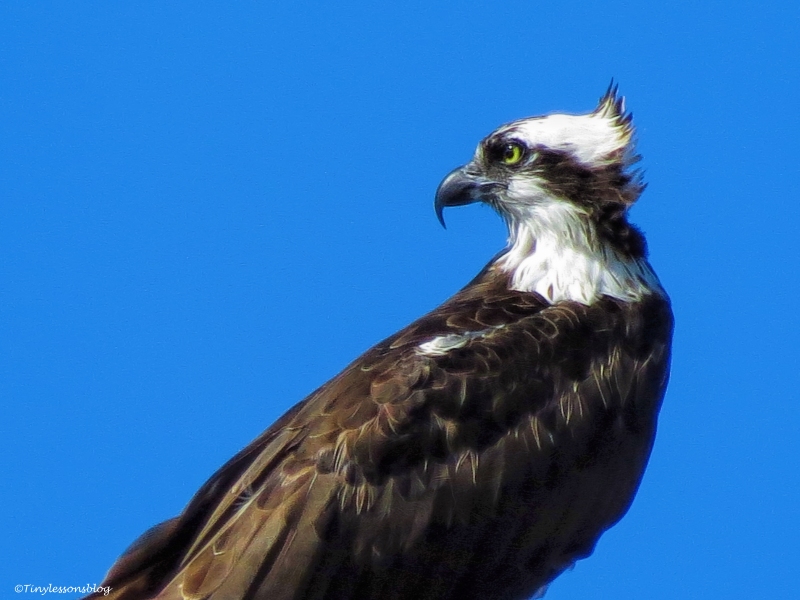 I had not seen Papa Stanley since before the weekend, not even with my binoculars. And Sandy’s behavior at mid-week told me she hadn’t either. She was restless. She  flew around a lot and stayed away from the salt marsh and her bay side hangouts much more than she normally does.

She looked at me and I looked at her. I was starting to get worried as well. Five days no see. Did something happen to Stanley? Or did he just take a few days of vacation time before the nesting season starts late December/early January? Sandy and I had no answers. But we could both enjoy the fall glory of the salt marsh.

Lots of  trees and bushes are in full bloom. And in absence of “traditional” fall foliage, colorful berries bring a sense of autumn.

At mid-week, I spotted a bird that I’ve not seen at the salt marsh before, a Belted Kingfisher. His rattling calls draw my attention, and hovering high up above the water he was quite entertaining.  His”helicopter” flight was spectacular.

I also saw a small bird I had not seen there for a long time, a Yellow-Green Vireo. This little bird moves a lot so it took time before I could get a clear shot. I hope he stays around the salt marsh for the winter. 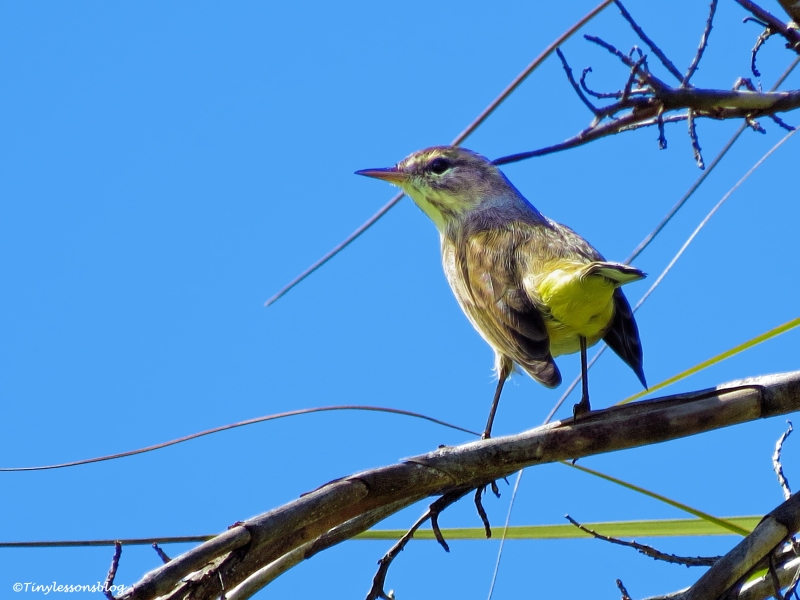 On my first walk this week, I didn’t stay at the salt marsh very long,  instead I took a long walk searching for Papa Stanley. I got great exercise, but saw no sign of him.

So yesterday, I had to go out again. I started at the beach. The weather was beautiful, but breezy. I spotted a Snowy Egret contemplating a fishing trip. 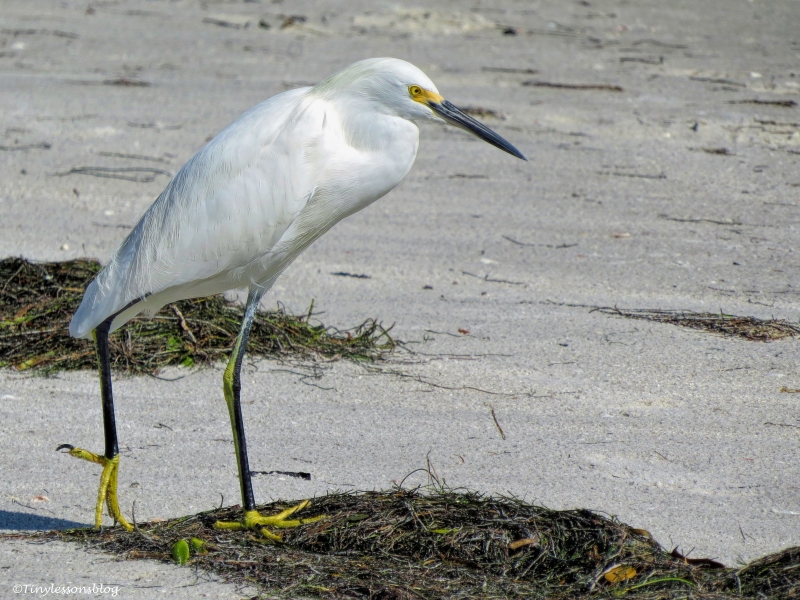 Royal Tern “clan” was there too. And they still have many juveniles who give a hard time to their parents. They want to be fed although they have already fledged. Like this little one.

Little Sanderlings were diligently at work, as usual. And a lone gull drew my attention as he was standing on a sand bank looking out on the ocean. Deeply in his thoughts for a long time. 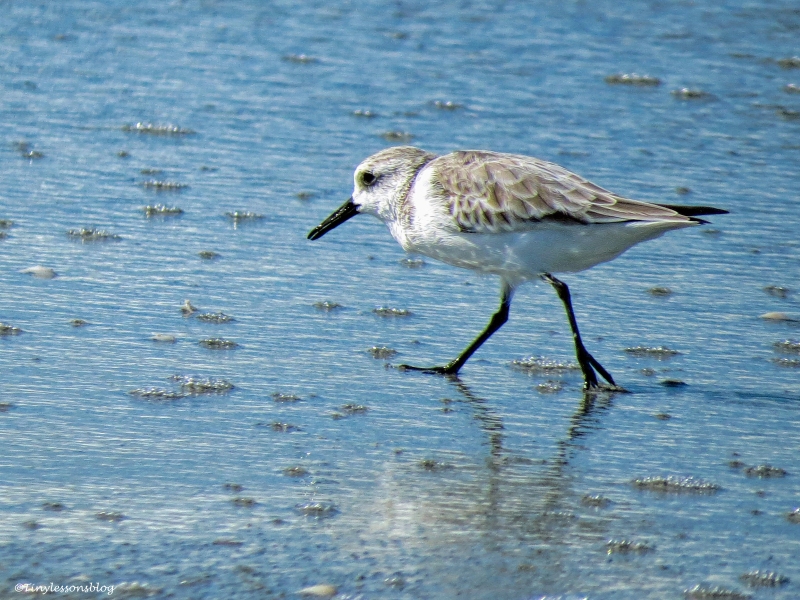 From there I walked to the salt marsh. No Sandy at the nest. But a few other birds were at home, like the young Great Blue Heron and the Tri-colored Heron. Both were taking shelter from the wind behind the bushes close to the Osprey nest.

I was hoping Sandy had not disappeared on me too, and started walking towards the bay side. Soon I spotted an Osprey perching on a lamp-post opposite Papa Stanley’s resort. When I got closer I saw it was Sandy. She was sleeping. With a half-eaten fish in her talons. Maybe she’d had a few sleepless nights worrying about Stanley?

When I reached her, she woke up. And started talking. And that’s when I saw Stanley. He was at his resort with a spotted fish.

He’d been fishing in the ocean, maybe far away, and finally come back home. He interrupted his meal to say hi, and listened to Sandy’s talk. He didn’t say a word. I wonder if she told him how worried she’d been. Or maybe she told him this was not a time to take a vacation when he should be planning his proposal gift for her. Whatever it was, I have to say it was great so see him.

With those good news, I wish you all a great weekend. I am looking forward to a family visit this weekend 🙂