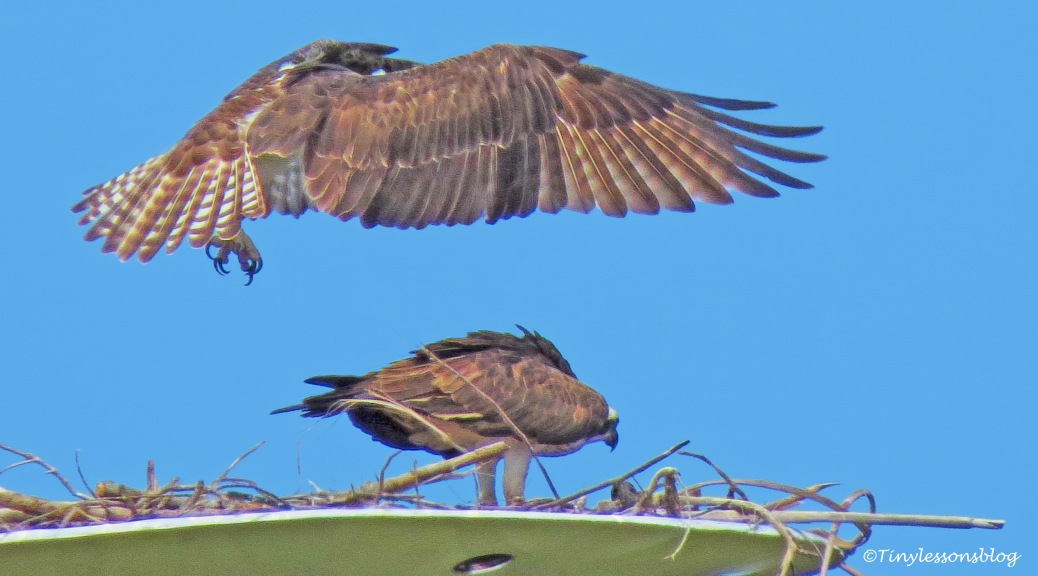 As many of you know, Mr. Dylan and I have been stalking the Osprey Family for first baby pictures for a couple of weeks now. Yesterday at lunch time we finally succeeded. Dylan’s persistence to go to the dog park, for first time since my work trip this past week, paid off. We are all smiles.

When we arrived at the marsh, Stanley had just brought in a fish. Sandy was eating and feeding the chick, whose little head was sticking up in front of her. Stanley decided to fly up to the perch to have a better overview. He often stays at the nest or close by when Sandy is feeding. The provider and guardian that he is. 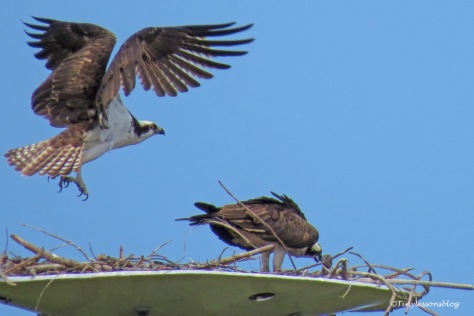 Sandy continued eating and feeding, but soon told Stanley that more was needed. You better go fishing again, she told him with determination. But Stanley stayed put.

We went to the dog park. When we returned Stanley had left. I wondered whether he had gone fishing or just to chill out a bit in his man cave. We walked around the marsh and spotted Miss Rosa.

For the first time this season she was there in the middle of the day, beautiful as ever.

At the far end of the marsh, we also spotted the older Great Blue Heron. He was walking confidently, his head high, inspecting the marsh. He is a tall, handsome bird. And, indeed, a great Mayor.

Of course there were some smaller birds flitting around as well. We spotted several European Starlings…

…and a very skittish Blue Jay. One look at the paparazzi and he was gone.

When we approached the osprey nest again, we noticed that the little one had moved closer to the edge. Unfortunately we had to ‘shoot’ almost right into the sun, but you can see that the chick seems curious about the outer world already. At less than three weeks of age. A future explorer for sure.

The baby had also discovered its little wings and was flapping them right in mama’s face.

The paparazzi are almost sure that there is only one chick this year. But they have been proven wrong before. What we know for sure is that this little chick is alert and energetic. It’s not yet ready for beauty competitions, but will be very soon. Its feathers will grow out and its eyes will turn from dark to beautiful bright orange. With these happy thoughts we said our goodbyes and walked home. 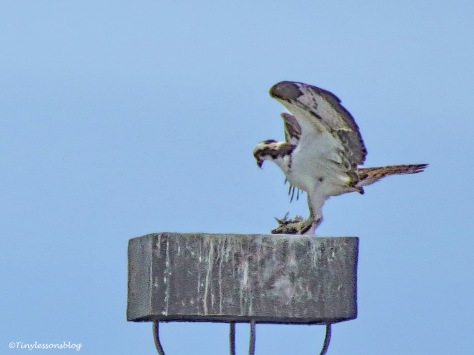 Reaching our front yard we saw, from a block away, that Staley was landing on his usual lamp-post with a new fish. Two fishing trips in about 90 minutes! No wonder the poor man looks a bit exhausted.

Much love from the paparazzi, the Mayor, Miss Rosa and the Osprey Family.

72 thoughts on “The Paparazzi and the Baby.”