Last Monday night, Dylan and I made a long-awaited discovery while passing the osprey nest: Mama Sandy was incubating. The next morning we promptly took a break from work and went out on the terrace to gather more evidence using my super zoom camera.

Sandy was sitting on the eggs and napping. After a while she woke up and turned the eggs. All while Papa Stanley was witnessing the carefully executed procedure from the perch. 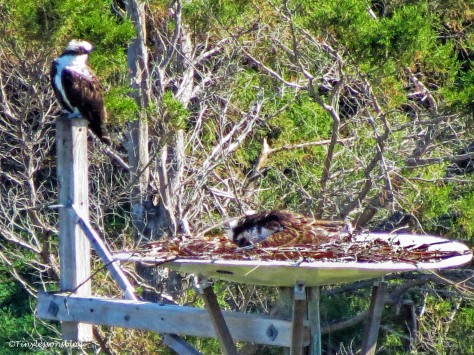 In 30 to 36 days from now it’ll be baby time! Two to three hatchlings if everything goes well.

On Friday Dylan and I took a walk around the marsh and found Sandy on a long lunch break. She had already eaten and was just chilling on the perch. Stanley was taking his turn incubating the eggs, his head peeking out every now and then. He is an exemplary hubby, always gives Sandy nice breaks and brings her breakfast, lunch and dinner.

Sandy checked us out thoroughly when we passed right underneath the nest. 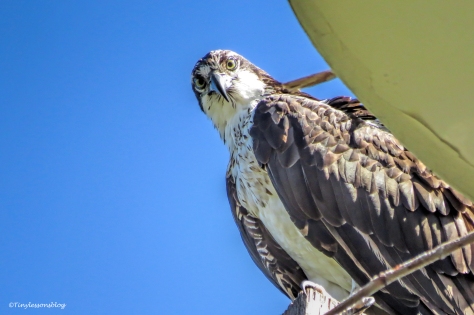 We spotted many other birds as well, but I want to show you a bird that I haven’t seen at the marsh in previous years – a Blue Winged Teal. I have a suspicion that a couple or perhaps even two couples are nesting at the marsh this year.

We also spotted the Mayor. He was all puffed up and looked determined to protect the marsh birds this nesting season.

Then this morning I went on a beach walk and was met by huge crowds. Not people but birds. More exactly, hundreds of Royal Terns, Laughing Gulls, Ring-billed Gulls… 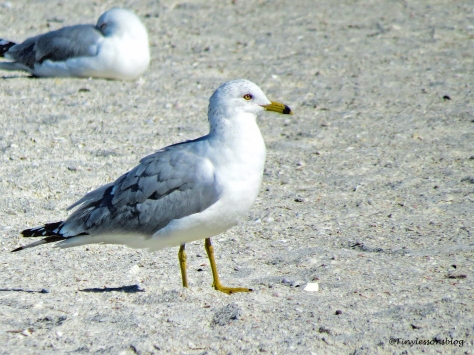 …and one juvenile Herring Gull. She was vocal…maybe calling her parents who were nowhere to be seen. 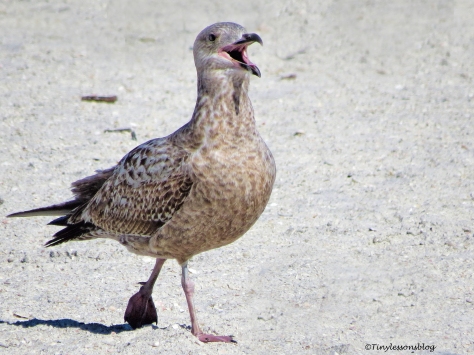 As usual, there was a young Royal Tern pestering his mom for food. He was so intense that after a while his mom decided to fly away. Not very far, but just far enough to reinforce the boundaries. 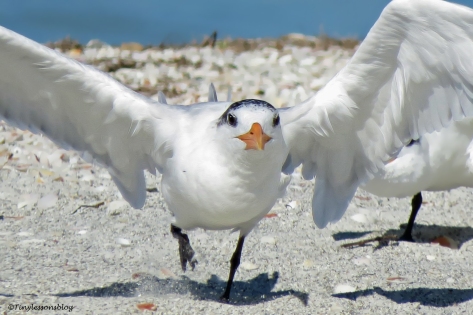 Now I have to reinforce my own boundaries as well and take Dylan out for his evening walk. Next weekend I will be traveling again, and this time I actually look forward to it. I am hoping to find a bird I have not seen “live” before…and be able to share some special fun with you next time we meet.

Thanks for being here. Have a wonderful rest of the week.

63 thoughts on “Newsflash. We Have Eggs. And Plenty of Company.”