Early on Sunday morning Papa Stanley brought her the proposal gift. A big fish she enjoyed on the perch while Stanley was watching her feast. I witnessed this annual ritual from my living room window while having my first cup of coffee. In the afternoon I went out with Dylan and found Stanley eating his own fish on a lamp-post close to the nest. We wished him Happy New Year and he nodded in response.

Sandy was watching him from the perch at the nest.

And when he had finished his meal, he flew to the nest. Before long Sandy sent him back to the ‘home depot’. While there was evidence of hard work already that morning as large branches were sticking out from the nest, more building materials were needed.

After Stanley left, we walked around the marsh and wished Happy New Year to Sandy too. She looked a bit stern, but I’m sure she was just inspecting Dylan’s new haircut. 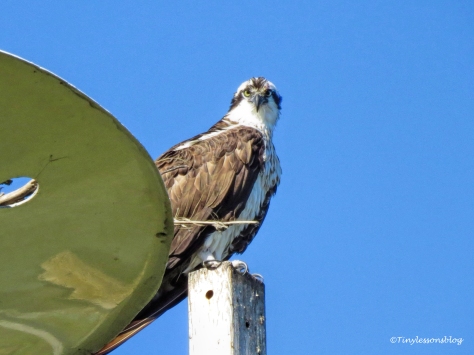 The salt marsh was quiet. Most birds were still in hiding after the week-long cold spell. We found one Black-crowned Night Heron in a sunny patch close to the nest. He was wide awake. That was it.

Walking back home we spotted only one Cormorant at the Sailing Center, where they usually like to congregate in large numbers. It was still very cool and windy.

Yesterday the weather had warmed up somewhat and we went to the dog park again. We noticed the salt marsh was getting more lively. Mr. Mayor was huddling right below the Osprey nest…

… where Sandy was having lunch on the perch, while Stanley observed her from the nest. I noted considerable progress in their remodeling effort.

Some Wood Storks were visiting again. And a little Snowy Egret bravely shared their accommodations.

The Reddish Egret had recovered from his New Year celebrations and was doing his magical dance in search of a bite for lunch. 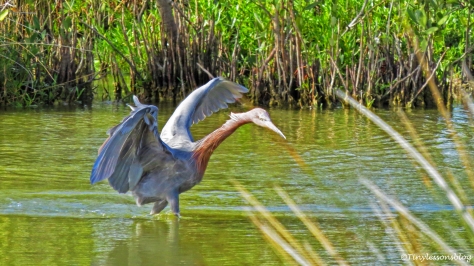 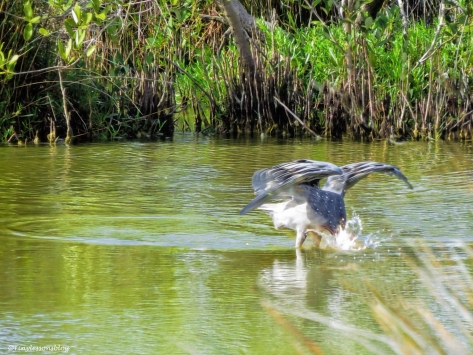 And finally we spotted Miss Rosa on the other side of the marsh. But she didn’t see us. She was taking a nap in the sun. 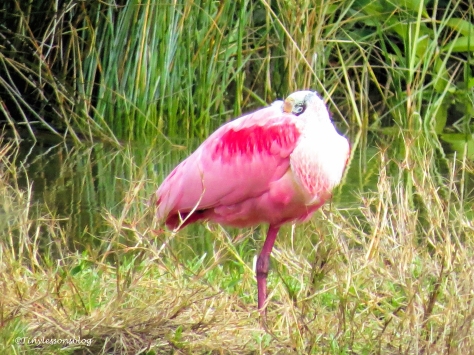 Walking back towards the nest we noticed from afar that Sandy was in the middle of her daily exercise routine. Right foot up, left foot up. Dylan sat down and I tried to capture her movements.

From a nearby islet a Tri-colored Heron was watching how it’s done. She stretched her neck to get a better view.

And a Blue Jay was paying attention too. He was exercising his neck trying to find a straight line of sight between the branches. 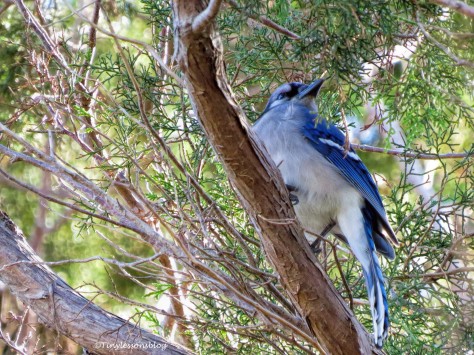 Walking home, we spotted a small songbird with raptor’s habits. A Loggerhead Shrike was waiting for lunch to appear in his line of sight.

Exciting times! We will be sure to follow the highs and the lows of Mr. and Mrs. Osprey’s nesting season. I am certainly hoping there will be less drama and more highs than last year…for them and for us humans.  Thanks so much for visiting the salt marsh gang.