Mid-morning on Saturday, Mama Sandy was sitting on the egg(s) her eyes closed. I assumed she had her breakfast soon after sunrise, and was now taking a nap in the sunshine. While she was sleeping, I was observing several smaller birds busy looking for food in the grass near the nest. A beautiful Mourning Dove tried to decide whether or not to trust me.

And a Northern Mockingbird decided that a fat worm was worth the risk of staying close by. 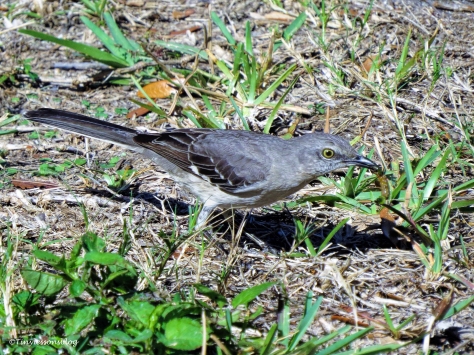 Then I saw several tiny birds, Pine Warblers I thought, playing around in a cypress tree. They were moving very fast and almost impossible to spot high up in a tree.

That’s when I sensed that something was up at the osprey nest. Papa Stanley was on incoming.

And he didn’t come empty-handed. He had been fishing and brought a whole fish to Sandy. A small mid-morning surprise, which Sandy gratefully accepted.

The fish changed hands. Stanley inspected the egg(s) and started his incubation shift. Sandy flew up on the perch to enjoy her meal. 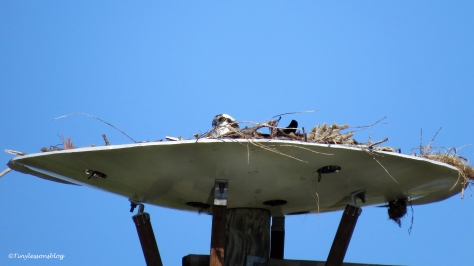 That was a smooth shift change, less than a minute. Not one word was said, both knew exactly how this was done. They are such a good match for each other, Sandy and Stanley.

I left them and took a walk around the marsh. It was fairly quiet. I am sure most residents were either at their nests in the middle of the marsh where nobody could see them or on the small ‘bird island’ in the bay. However, I spotted the ‘yoga bird’ again. She was in a secretive pose, hidden behind her wing for a while, but then I saw it was the Tri-colored Heron. 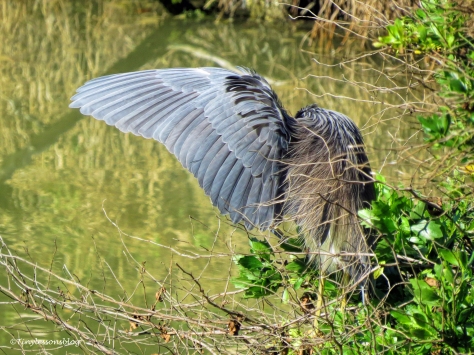 And, as usual, the Little Blue Heron was present too. He was looking for food in the shallow part of the marsh.

At the beach-end of the marsh I spotted a visitor. First I thought it was an American Bittern, but concluded it might have been a juvenile Green Heron. They tend to be very ‘streaky’ on their chest. 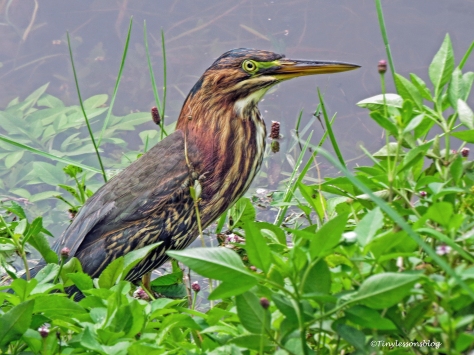 There were several Ibis around and a few Night Herons were sleeping in the bushes. 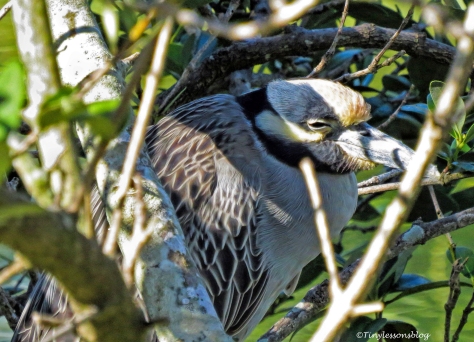 Walking back towards the osprey nest, I saw the Mayor fly in. He settled next to the water management installation, but kept off of it. I think he knows how to read. 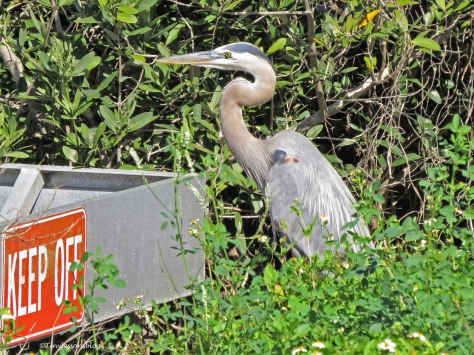 I saw Sandy had eaten her fish, but was still on her break. Just then, almost exactly 30 minutes from the time she received the fish, she flew back to the nest to relieve Stanley.

The second shift change was as efficient as the first one.  One up, side by side, one down. Done. 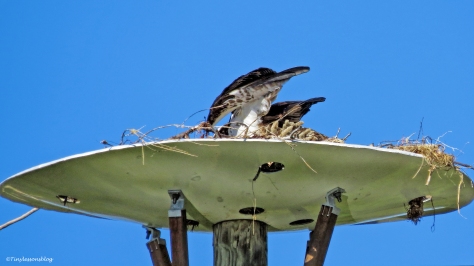 Sandy was back incubating and Stanley flew away. Walking home by the bay side, I discovered he had parked himself on the wind device at the Sailing Center. Ready for the next fishing trip.

I also spotted a remarkable 12-person row-boat on the bay. First I thought there were several boats next to each other, but realized it was all one boat. A strange-looking ‘installation’. I have never seen anything like this before, have you?

Last night Dylan wanted to go to the dog park and we passed by the osprey nest coming home in the dusk. From far I saw Stanley returning to the nest. He sat down on the perch, perhaps ready for a short night shift. It was cloudy and almost dark, but I shot one picture towards the osprey nest from the foot path we followed. As the night fell, papa was sitting right there with mama.

We all wish you a wonderful week. Stay positive.

76 thoughts on “A Good Match. Definitely.”