I know, Lady Cawcaw gets disproportional coverage in the ‘Salt Marsh News’ right now. But for a good reason. We know she’ll be gone soon. That is, as soon as she learns to fish for herself. Her parents are using tough love to get her motivated.  This has been very clear over the weekend. The food portions are smaller and far between. And she’s hungry, her crop is empty.

Over the weekend she was away from the nest for hours, I assume hovering over the waters around here. But she always came back without a fish. And immediately upon return told her parents she had tried, but had not been successful.

On Saturday, Sandy and Stanley demonstrated their strategy with the teen. Sandy was keeping an eye on the nest from a lamp-post close by. But I saw her finish the whole fish by herself. She had a full crop, as you can see. 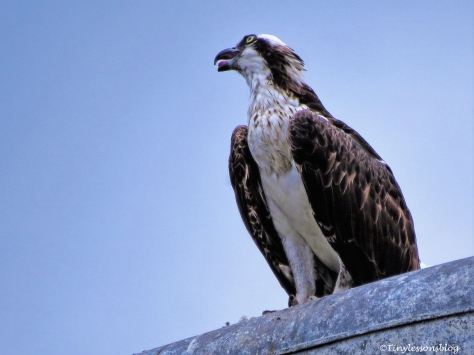 She was also watching Stanley fly overhead with his pal Steve. You remember him, right? Both of them settled on Marriott’s roof to scan for fish in the bay. I was hoping Stanley would bring lunch for Lady Cawcaw. But the guys were not in a hurry. They just chilled out in the breeze up there. I could hear friendly small talk, two guys catching up on a fishing trip.

Although it was partly cloudy, it was very hot. I decided to check if the residents had moved back to the salt marsh. They had! The water had receded a bit and the egrets enjoyed being able to walk around the smorgasbord. 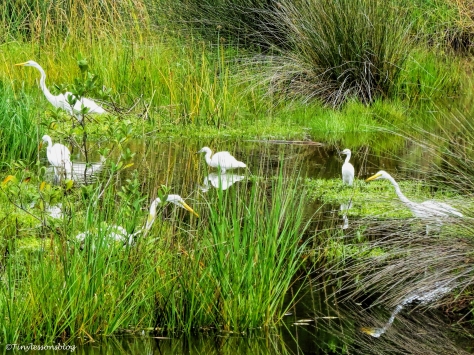 The young Great Blue Heron was there too. I have a feeling that the Major has moved on (you remember him, right?) and the youngster is trying to secure this coveted office. He is always there, and I have to say his behavior has improved. No known attacks on the Osprey nest or others lately. He has cleaned up his rhetoric. 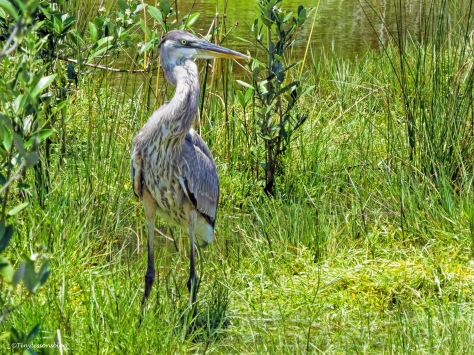 But to his surprise another candidate had surfaced. A Great Egret was speaking to the crowds.

Some listened attentively and moved closer. Others turned their attention elsewhere.

The Great Blue Heron moved closer too. I was afraid he would confront the speaker right there. But he was quiet. Probably planning to tweet his counter arguments later on.

The juvenile Night Heron had never heard a speech like that and lifted his head curiously from the grass.

A young Brown-headed Cowbird was curious too. It looked like the speech spoke to younger voters.

But others, like Miss Rosa, who have seen and heard it all before, preferred to take a nap in the bushes.

And some just didn’t pay attention to the speaker because they had some other pressing business to take care of, like this Snowy Egret.

And others simply moved away from it all, like this Mottled Duck couple.

Some protests were heard. The Moorhens are known to speak their mind. You just can’t come on their turf and get away with it.

And in a nearby palm tree, a Common Grackle loudly added his voice to the mix too.

Soon after that the speech ended. Everybody went on with their business. Miss Rosa had woken up and scanned the landscape carefully from her hideout.

Before leaving I spotted a fairly rare visitor, an adult Little Blue Heron. She had probably come to attend the rally. I was happy to see the smaller waders too had returned to the salt marsh. 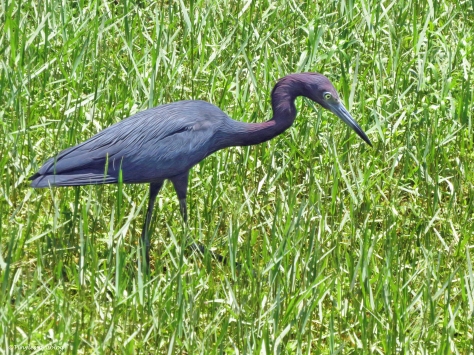 Yesterday it was too hot to take a long walk, but I kept an eye on Lady Cawcaw from my terrace. I could hear her asking for fish, and I spotted Mama Sandy fairly close to the nest on the bay side. I assumed she was monitoring the situation and would intervene if it got critical.

Late this afternoon, while writing this post, I decided to go out on the terrace and check on the young lady again. To my delight she was eating what looked like a whole fish.

I hope she had caught it by herself. We will know soon enough. If this was her first fish, we will only see her in the nest for a few more days. But if Sandy or Stanley had brought it, she will probably stay a couple of more weeks.

Thanks for reading the ‘Salt Marsh News’. We all wish you a good week.

56 thoughts on “Tough Love. And an Election Rally at the Salt Marsh.”