I’m back from my self-imposed work exile! Phew. I survived, but that was something else. And the truth is I’ve missed you all. I have no idea what’s been going on, but now I’ll have much more time to find out. So hello everybody! 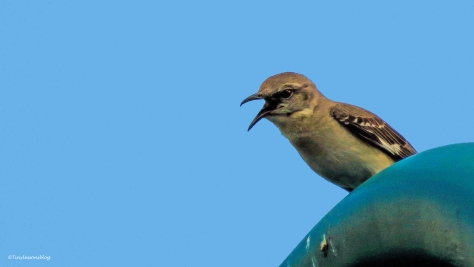 Thanks to Dylan, who wants to visit the dog park next to the salt marsh at regular intervals, I have some news to tell. But since you asked, I’ll first need to explain how the “dog stabilizer” works.

See, when we walk past Mama Sandy’s nest, I stop. Then I say “hi Mama”, and Dylan stops too. Unless a squirrel happens to be in the vicinity. If everything is good this far, I’ll check the settings and raise my camera. I say “wait for mama”. Dylan sits down and I can grab my camera with both hands while his leash is around my elbow. Performed like this, the “dog stabilizer” works about half of the time now. And we’re getting better. Like the other evening around sunset time when Miss Rosa was visiting the salt marsh.

That same evening we spotted the “Mayor” again, for the first time in a few weeks. I have a feeling he had some family affairs to take care of, such as feeding his young, on the bird island in the bay. It was lovely to see him again.

When walking back from the dog park we saw both Papa Stanley and Mama Sandy in the nest – and two little heads peeking out. Dinner was over, but Stanley had stayed for a while. Maybe for some parental discussions.

This morning we slept late. I mean I did, and Dylan let me. He sat on the floor next to the bed when I opened my eyes quite a bit after 8 am. Luxurious feeling after many late nights with too little sleep.

The first thing on the day’s program, even before a cup of coffee, was a walk at the salt marsh. And who flies in if not the Reddish Egret. The Clown of the marsh.

But he was unusually calm at this relatively early hour. And I, of course, only had a few seconds of observation time. The “wait for mama” only works for so long.

The Osprey family had already enjoyed their breakfast. Only Sandy was visible from the ground. But when she started preening herself both chicks raised their heads. You can see how small the second chick is compared to the firstborn. But s/he is still hanging along, right under Sandy’s wing. The firstborn is already very curious about the world outside the nest and looked at us with great interest. 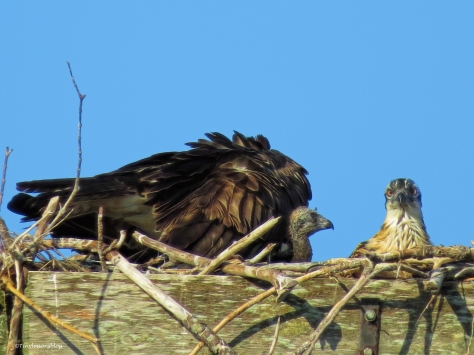 We also spotted another baby, a young Little Blue Heron. She was really tiny, about 9-10 inches tall from top to toe. And there was just a first hint of blue on her. But she was brave, exploring the salt marsh all on her own.

Just when we were leaving, we saw two other youngsters, Snowy Egrets. This one was really small too.

So that’s the latest. Tomorrow I will start experimenting with my new camera gear. It’s time to have some fun. Life is good.

I wish you all a great week and look forward to catching up. Asap.