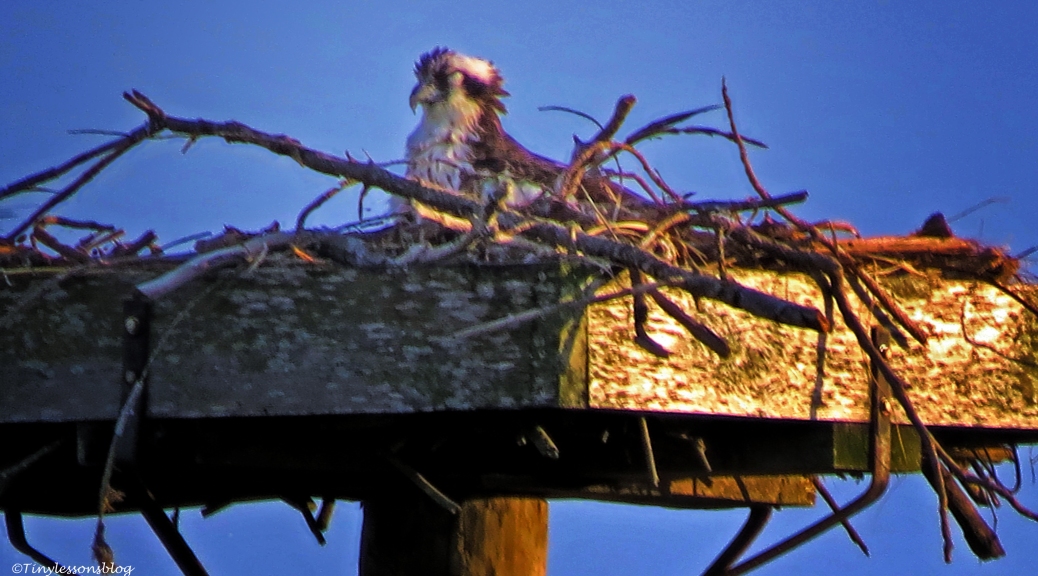 Every evening on our walk Dylan and I have passed by the Osprey nest in a quest to see the Baby. But nothing since the picture in my post last week. So one evening I took my camera along for the evening walk. I thought I might as well teach Dylan to sit or lay down completely still when I lift my camera so I can use both my arms as a “tripod”. Well. That was easier said than done. See, there are too many traces of squirrels and other small animals around the salt marsh. Sitting or laying still is not an option.  Although we do it very well in the house.

On that walk we saw Papa Stanley eating dinner on the very lamp-post where he used to keep an eye on the three chicks last year. Since we were on the sidewalk, Dylan agreed to cooperate and I got one relatively shake-free picture of Stanley. He was looking over to Sandy in the nest. He had already eaten the head of the fish and was now working on the tail. The best parts would go to the nest. 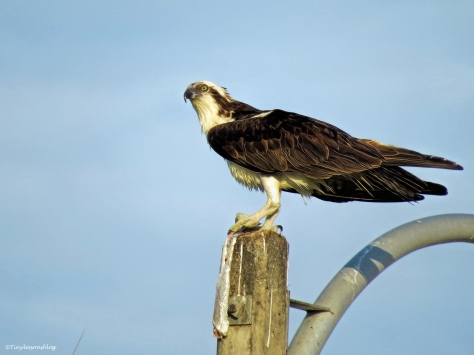 Mama Sandy was in the nest, but we couldn’t see the Baby. We walked around the marsh trying to spot a small head. But could only see Sandy half asleep, lit by the last rays of the setting sun (featured image). And we saw a Red-winged Blackbird. He was shaking a bit too. In the camera view, that is.

Those were the three somewhat usable images I got with Dylan as my assistant. And believe it or not, I haven’t had a minute to go out there on my own. See, my big project has entered its final stretch. And someone I know fairly well being a terrible procrastinator, the final stretch always means a long spurt. Of the kind that keeps me clued to my computer for at least 12 hours a day. I’m driven by deadlines, and I think I’ll never learn to pace my work properly. There is always something more interesting to do when there is plenty of time. So instead of getting out to the salt marsh on my own, I have taken in the natural world by admiring the orchid blooming in my office.

But I have to confess something. One day last week, when the deadline was still about three weeks away,  I decided to reward myself for all this hard work. Prematurely. Around midnight, after another grueling work session of about 13 hours,  I splurged on all new camera gear. I thought I had learned the basics and deserved something more than my super zoom birding camera. Or asking to borrow my hubby’s big Canon.

The five packages arrived this week. I had to open the boxes as they took up half the entry hall. It took about an hour. I placed my new treasures carefully on the living room table and asked Dylan to guard them. He took up his duty immediately. 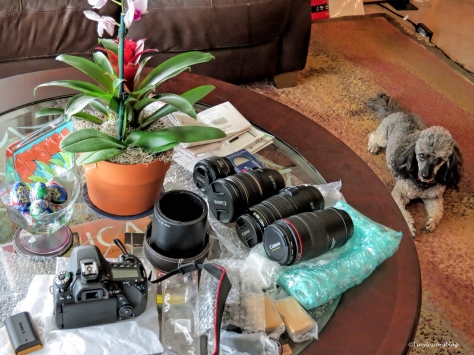 In that process I also discovered the Easter eggs next to the living room orchid. Remnants from the Easter party. They have since ended up in the trash, and Dylan has since been relieved of his guard duty. But my fingers itch. I want to try the new camera and all the new lenses.

Surprise, surprise. For once I have demonstrated I have a backbone. The gear will stay on the living room table, untouched mind you, until next weekend. Just like that. Because by then I should be much closer to the goal I rewarded my self for.

But despite nightly walks at the salt marsh, the mystery of the Osprey Baby remained unresolved. This morning I was observing the nest from my living room window with a cup of coffee in my hand. I saw Sandy’s back and nothing else. Suddenly Stanley flew in with a fish. I rushed to get my birding camera and ran out onto the very windy terrace. This is what I saw zooming all out while leaning heavily on the wall.

Stanley was still there, and Sandy was tearing out small pieces of the fish feeding the Baby. Yay! It seems Sandy and Stanley have only one nestling this year, just like in 2014. And that means this little one will get a royal upbringing until it is completely ready to fly off and fend for itself. Much better odds to survive his/her first year than what the three chicks had last year. I am excited and feel privileged to be able to follow the childhood of this little Osprey.

And as to my big project, I can now see some light at the end of the tunnel. And the delightful orchid still blooming in my living room. Have a great Sunday and a wonderful week ahead. Peace.

55 thoughts on “Premature Rewards and Other Natural Phenomena. But Where Is the Baby?”