The Christmas morning was beautiful. Little on the warm side. Okay, we were probably one of the warmest places in the country. No jacket required, not even in church. Late morning everybody was heading to the beach, including Santa. 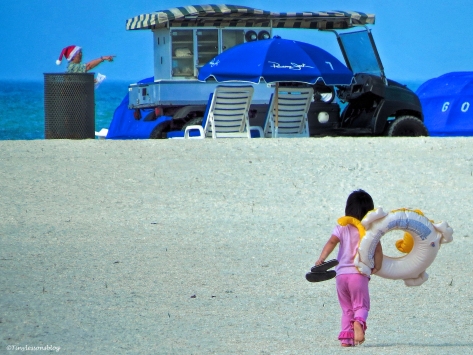 I got out too,  for a much needed walk. A solitary break from cooking and eating. And eating again. I took the shortcut through our garden to the beach and then to the salt marsh.

It was very peaceful. You see, the park was actually closed. No cars coming in. The birds were not many either. A couple of Great Egrets, a few White Ibis, Moorhens and several Night Herons sleeping in the bushes.

This juvenile was the only one agreeable to a photo shoot. Albeit half-heartedly.

When I arrived to the east end of the marsh, the Osprey nest was empty. But I enjoyed the company of the “duckies” who have pretty much reserved the deep water for themselves. A young Moorhen came up on land and was quite funny walking the “plank” with his big feet. 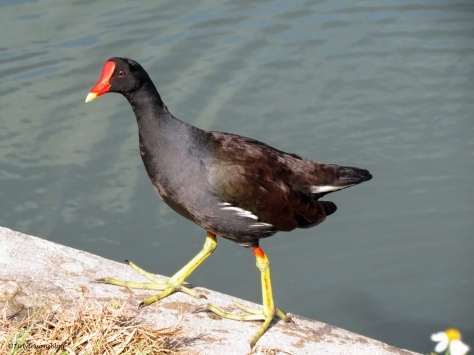 Soon the Ibis also wanted to show me his style, balancing on the edge of the installation that regulates the ocean water coming into the marsh. 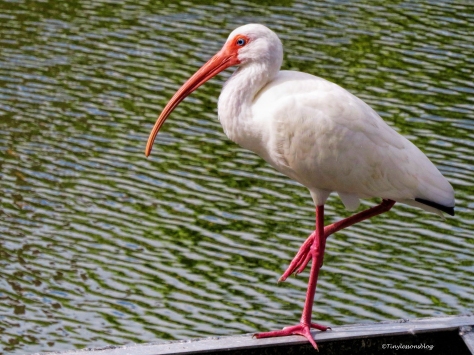 The young Muscovy duck was resting further out, at the corner of the same installation. He lifted his head to acknowledge me, but didn’t move.

I was admiring the little Grebe, who seems to have made the marsh her home, when Mama Sandy flew into her nest.

After saying hello, she settled on the back edge of the nest and scanned the skies. Looking up, I didn’t see anything interesting. 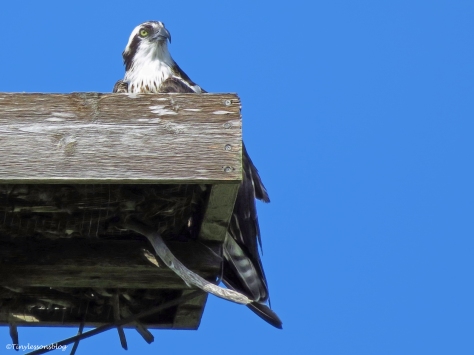 And she scanned the ground too. Two unleashed dogs came running with their owner. When outside the dog park, dogs must be on leash. But I don’t think they knew how to read. It’s a pity that their human didn’t  either.

Mama Sandy continued to stare at the sky, and suddenly she gave a sharp, loud warning. I saw the young Great Blue Heron approaching the nest with his landing gear already down.

But Sandy was adamant he wasn’t welcome.  Full stop. So he picked up his legs and flew towards the bay side. Soon after that I saw Papa Stanley fly high up in the sky, not far from the nest.

And he was coming close. Very close. He was about to land, but Sandy told him not to come to the nest. Not without the customary gift!

See, that’s a clear message. You don’t arrive empty-handed. Stanley changed his mind in the last minute. Sandy knows what she wants. And he knows very well he needs to bring a gift to be allowed into the nest.  So he flew towards the bay. This courting is getting serious.

Soon after Stanley disappeared from sight, Sandy flew away too. Maybe to check on him.

When I walked out from the park, I spotted the Northern Mockingbird again. He lives somewhere close to the wooden fence of the park. He was in deep thought. Very serious. Maybe he’s been following the Osprey saga, and was pondering where to find a mate of his own.

Just before arriving home, I saw Sandy and Stanley flying together very far over the bay. It looked like she would get her gift. Sooner or later. Stanley had already caught a fish. I didn’t get a good picture of the two of them as they flew so far apart, but I’ll share what I’ve got so you’ll see I’m not kidding. He clearly has a fish. In less than ten minutes. There’s hope for this romance.

With that continuing excitement at the salt marsh, I wish you all a great Boxing Day! Peace.

74 thoughts on “Christmas Morning at the Salt Marsh. But Don’t Come without a Gift. Please.”