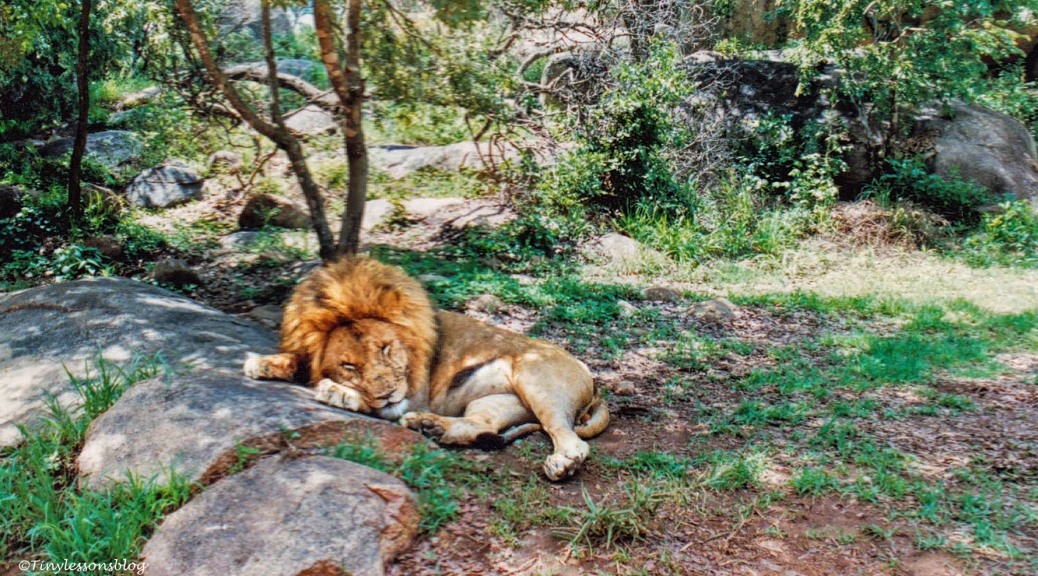 This weeks Photo Challenge, “careful” brought into mind many adventures in the wild all those years ago. I was young and adventurous, driving safaris in several countries while we lived in Africa. It was tempting to become confident. But that’s not an advisable mindset when entering the world that belongs to the wild. I would always tell myself “be careful, very careful.”  Even that wasn’t always quite enough. So I went to dig up some evidence in our scanned photo archives.

This male lion was sleeping less than 90 feet from our vehicle. And not behind a sturdy fence in a zoo, but in a small national park in Zimbabwe. He looked peaceful with his huge head resting on his paw. But from previous close calls with lions, I knew we had to be very careful in his presence. That was the case also with a female lion who walked on the trail right in front of our vehicle for more than half a mile before veering off into the dry savannah in Queen Elizabeth National park in Uganda. 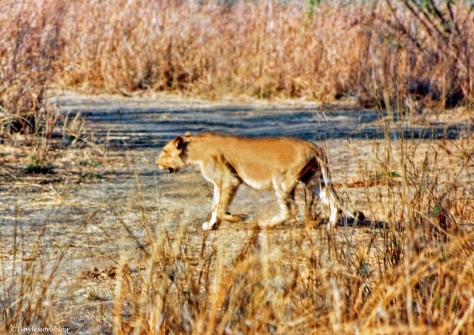 A year or so before our first visit there, a male lion had killed a man on that very trail. The man-eater was killed by the rangers, but it was rumored that a ghost of a lion was seen roaming the park at night. We were not lucky to see it, but this is how it was described by those who saw it. Glowing in the dark. 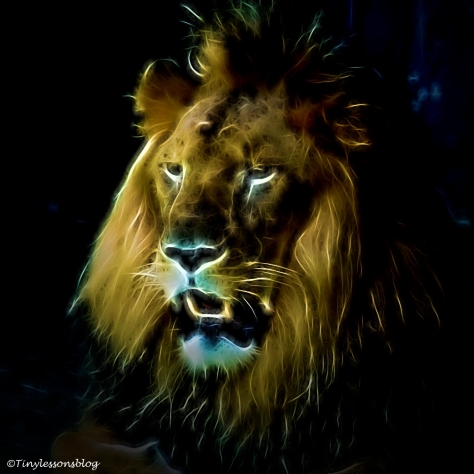 Elephants also have my respect. It was not advisable to come between the matriarch and the youngsters in the family. Despite being very careful, I came to see an elephant’s belly and her front legs up in the air above our vehicle. In the bush in Uganda. Understandably there is no photo evidence of that particular encounter. Only a wild video recording of the roof of the vehicle when hubby’s camcorder flew around, capturing the elephant’s “trumpet solo” and our screams in the vehicle.  All my attention was focused on pressing the gas pedal to the floor, and getting out of there. That situation was very similar to this one in Zambia. Only the tree was lush and much bigger, effectively hiding the matriarch waiting for the young ones right next to the trail. Needless to say, that incident raised my careful lever even a notch higher.

Obviously we had to be very careful when walking along rivers. The crocodiles were known to snatch people and drag them into an underwater “storage”. This happened to a friend of my Zambian colleague. Luckily the storage room had “skylights”. He could get some air, and the villagers could hear his cries for help. They were able to dig a bigger hole and pull him to safety. He lost a leg, but survived. So being careful, I never swam in rivers or lakes known to harbor these dangerous giants, like this Nile crocodile in Ethiopia. 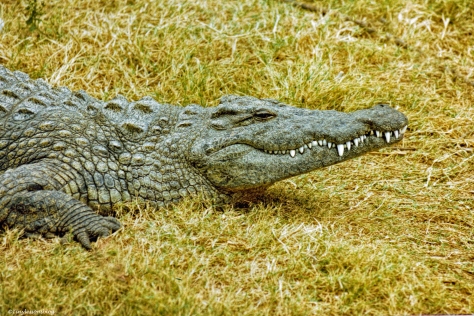 Another not so friendly swimming companion was the hippo. It may look slow and even cute, but it’s easily scared and capable of killing humans both on land and in water. One night in South Luangwa National Park, Zambia, I woke up at 2 a.m. to a strange noise. It came from right outside the window. And there was a huge dark shadow on the curtains. I tiptoed carefully to the window and parted the curtain, just an inch. And was looking at the butt of a huge hippo. So when they were in the water, I was on the water. And when they came to graze on land, I learned to keep my distance.

If and when you enter the wild kingdom to enjoy the wonderful experiences it offers, my recommendation is to be careful. Very careful.

You can find other responses to this challenge here.

59 thoughts on “Be Careful. Very Careful.”