I was still quite far away.  But could see two dark brown spots with white crowns against the early morning bright blue sky. My two favorite Ospreys. I hadn’t spotted Mama Sandy or Papa Stanley for quite a few days, and was getting worried about the nasty wound Sandy had on her leg last week. But there they were, peering down into the bay waters from the roof of Marriott Resort.

I was walking closer. Suddenly I saw the one on the lower roof fall straight down. Immediately followed by a loud call from the roof top. It looked like a free fall, wings pointing straight up. I stopped in my tracks, but couldn’t see the surface of the water from where I was. I scanned the sky over the bay. And there it was, against the rising sun, a silhouette of an Osprey flying back on shore with a fish. I took a blind shot. Just as evidence of the fastest catch I’ve witnessed. Ten, maybe fifteen seconds tops. 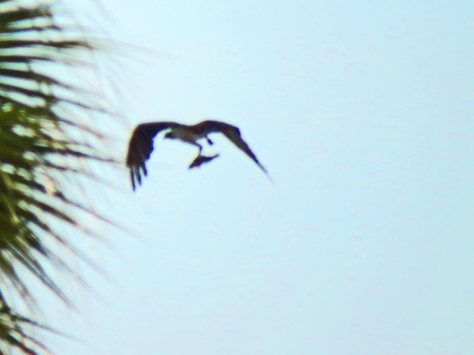 Now I had to find out who it was. And where the breakfast would be served. Although I was on my way back home after a two and a half mile walk, I turned around and retraced my steps back towards the Sailing Center. Then I saw it. 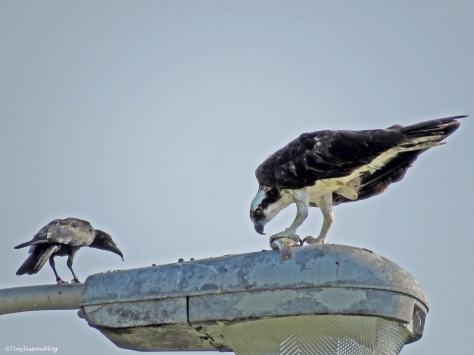 An Osprey eating breakfast on a lamp-post quite far away. With a helpful cleaning crew close by. I was too tired to walk all the way to the lamp-post to be on the “right” side of the sun light. So I just zoomed all out. And saw it was Sandy. Her wound was still faintly visible, but healing well. What a relief!

Happy after seeing her lightning fast dive, I walked back towards the resort. And found Stanley peering down too. At me. 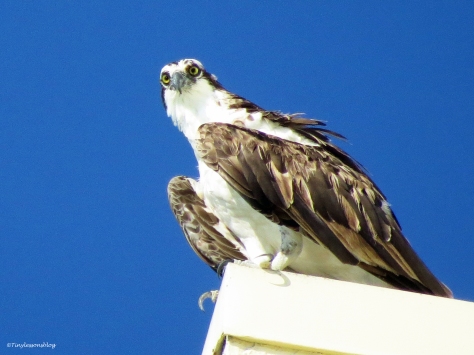 He seemed to enjoy his spot on the top of the world. Instead of taking care of sick Sandy in some secret location, like I had feared. I smiled at the thought, and hoped to catch his breakfast dive. But it soon became clear to me that he was not in a hurry. He was more interested in watching me at the parking lot below than scanning for fish in the bay. So I decided to remove the distraction and walk home. Stanley could get his breakfast. And I could get my second cup of coffee.

Around mid-week I took another walk later in the day, and started at the salt marsh. Lots of Great Egrets were enjoying the quiet afternoon. 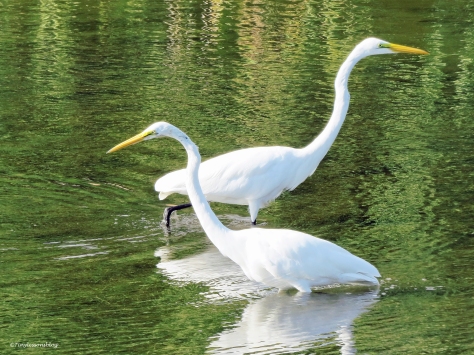 And I also spotted both the Mayor and the younger Great Blue Heron.

Rosa was at home too. She always volunteers a nice pose, doesn’t she? A Black-crowned Night Heron was in deep meditation. Or maybe just thinking of breakfast. 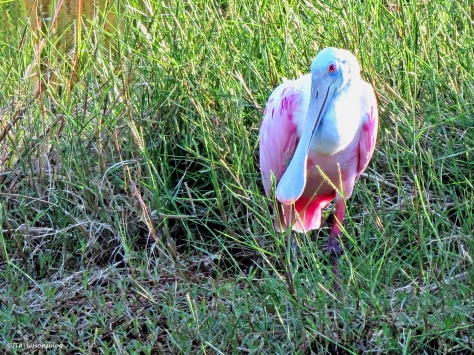 From there I walked to the beach. And had the pleasure of the company of an American Oystercather and a few Brown Pelicans. 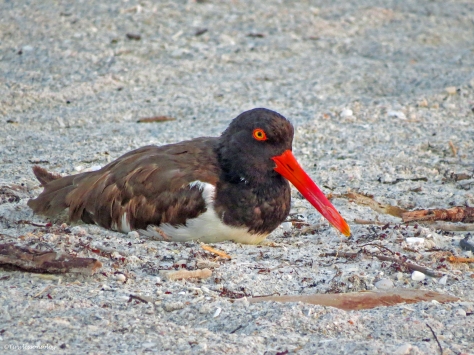 I noticed the high tide had made a temporary swimming pool by building an extra sand bank between the beach and the ocean. I watched a Royal Tern thoroughly enjoy her bath. I prepared a gif image to let her show you how it’s done (if the gif doesn’t play, please click on the image).

Little later, the sun started her dive into the ocean, offering brilliant colors on the evening sky.

I wish everyone a great weekend, and hope T.S. Erica doesn’t invite herself to visit the salt marsh early next week. We don’t want to meet her.

63 thoughts on “The Record Breaking Fishing Trip. And the Joy of a Bath.”