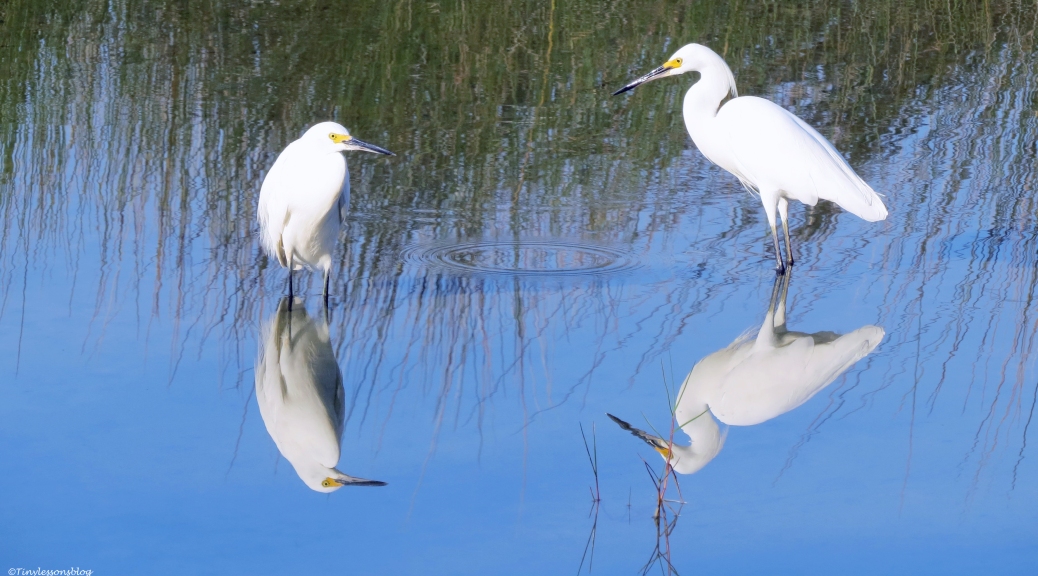 Sindile, the youngest of the three Osprey chicks, was alone and asking for fish. She was also the only one in the Osprey family I had seen in the nest (looking with binoculars from my terrace) since my return home. Nobody came to keep her company even at night.

I found her two siblings each perched on their own lamp-post on a parking lot, just outside the park boundary and fairly close to the nest. I was happy to see for myself that the chicks had made it through the storm that hit our area while I was away.

But the signs of the storm were still visible. Decorations, railings and loose sticks had been blown off the nest. Palm fronds and other debris from trees and bushes were scattered throughout the park. Only the immediate area around the salt marsh and the trails had been cleaned up. You may remember the old palm trunk (aka the condo building) that used to house Papa Stanley’s man cave, and homes for the Nanday Parakeets, Red-bellied Woodpeckers and European Starlings. It was now laying on the ground, demolished by the storm. Luckily the little ones living there had already fledged.

After locating all three chicks, I wanted to find Mama Sandy and Papa Stanley. And I was lucky. Sandy had parked herself on a street light a quarter-mile north of the salt marsh, and Stanley was on his usual spot in front of the Sailing Center on the bay side. They were both still wet after recent fishing trips.

It was great to have found all of them in good health. Lofty and Aspire fledged about three weeks ago. They are now following Sandy and Stanley on fishing trips and learning to dive for fish by themselves. An adult Osprey catches a fish in one out of four dives, on average. Sometimes the success rate is as high as 70%. I believe Sandy belongs to that champion category. I’ve seen her come back with a fish in three, five and seven minutes! One time she went fishing right there in the salt marsh and brought home a fish in 30 seconds 🙂 Stanley usually takes closer to the average of 12 minutes. But for the chicks fishing is a tricky business. And they have to master this unique skill in 4-5 weeks after fledging. Their lives will depend on it.

I’ve been worried about little Sindile. She was born about a week after the other two, but had not fledged when I left on my trip early last week. And there she was, perched on the edge of the now bare nest. I spent some time with her and then decided to walk to the other end of the marsh. I wanted to see if I could spot any of the other residents. And I did.

I was happy my feathered friends had weathered the storm well. I spotted most of the usual suspects, apart from the Spoonbill. To my delight I also saw two Black Skimmers at work in the salt marsh.

They prefer to skim on the ocean or on the bay, so it was a treat to see them in action right there. I was watching them when I heard some commotion at the osprey nest in the other end of the marsh. I raised my camera and started shooting. Sorry for the quality as I had to shoot right against the sun and crop these images heavily. But at least you can see what happened. Life is not easy for the youngest chick.

I felt for Sindile, and hoped she had managed to keep at least a small piece for herself. I started walking back towards the nest. And the next that I knew, Lofty landed in the nest. He wanted to inspect if there was anything left of the fish.

I didn’t see if Lofty got any fish. But at the end of the scuffle Sindile was alone in the nest. That’s when she surprised me. She spread her wings and took chase. Wow! She had fledged while I was away. And she was fighting back! She probably flew after Lofty just to show him she was angry. She didn’t get to him, but got excellent flying exercise at high speeds for a few minutes.

All this happened on Tuesday afternoon. I also went to see them quickly yesterday morning. Aspire was in the nest. She was wet, which means she’d been diving for fish. I guess she had chased away Sindile who was perched on a lamp-post nearby.

Sindile was looking at Papa Stanley who was flying overhead with big brother Lofty, and a fish. I’m thinking Lofty had followed his Papa on a fishing trip, but didn’t catch anything himself this time.

Sandy was drying herself on a lamp-post on the bay side, also watching Lofty and Stanley.

I’ve noticed that Lofty is not around much any more. I haven’t seen him since that flight yesterday morning. He may have learned to fish well enough to take off on his own. But I’m guessing he’ll not go very far from home, as yet. Aspire will probably stay around at least for another week practicing her fishing skills. And Sindile, the little survivor, maybe two-three more weeks. Then they’ll start their independent lives as young Ospreys, and their fantastic parents get a well deserved vacation.

I hope your week is going great. Love from all of us around the salt marsh.

46 thoughts on “Commotion. Surprises. And Demolitions at the Salt Marsh.”