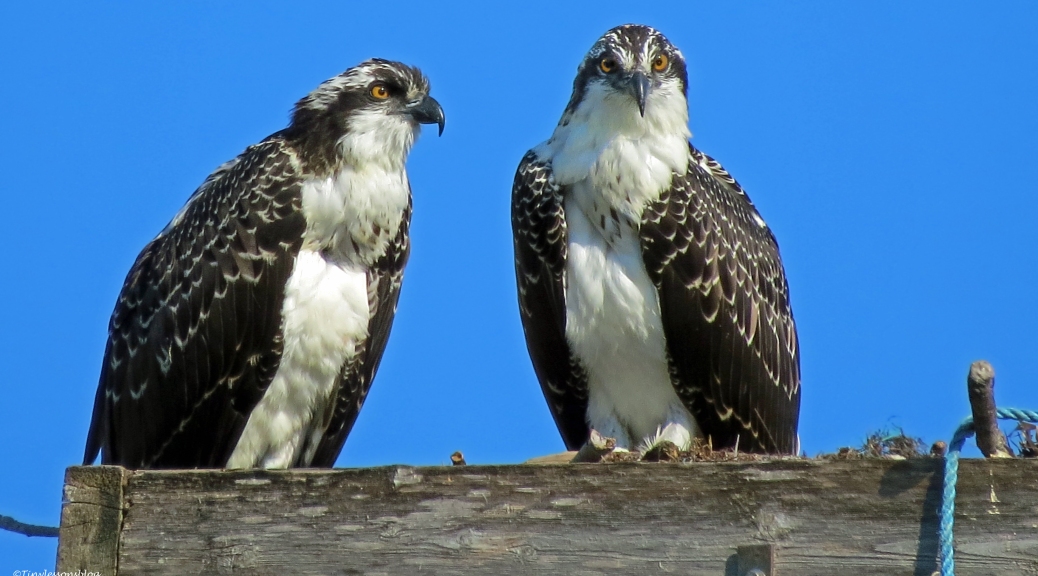 The morning was beautiful. A few birds were out and about at the salt marsh, still looking for breakfast. Some were trying to hide in the bushes. And yet others chose to pose for the visitor.

At the Osprey nest the breakfast was over.  Lofty was again looking after little Sindile, who has not yet fledged.  Mama Sandy had left to fetch her own breakfast, and middle sister Aspire was flying around somewhere, getting her exercise. Everything appeared peaceful.

But soon it was obvious something was amiss. When Aspire tried to return to the nest, Lofty got very excited. He was watching her approach and made it very clear she shouldn’t land in the nest.

I have no idea what had happened between them earlier, perhaps at breakfast time. Maybe Aspire took the fish for herself, like I saw her do last week, and didn’t share enough with her siblings. But that’s just my speculation. What I saw is in this 1.5 minute video clip. The last segment is on half speed to let you see more in detail how it went down.

After this incident Aspire tried to land in the nest one more time while I was still there. Lofty chased her a short distance before returning to Sindile in the nest. Wondering what had caused this seemingly serious dispute between the two best buddies, I walked to the bay side.

I was on my way home, on the other side of a busy street, when I heard Lofty getting very vocal for the third time. I tried to capture the drama, shooting pictures from quite a distance over and between passing cars (you should have seen me, good I didn’t get killed). The shots are not very sharp, but the sequence of events is even clearer than in the video. Like in slow-er motion. Although for the two siblings it was fast enough, I’m sure of that.

Poor Sindile didn’t want to know anything about the drama playing out while Mama Sandy was away. She turned her back and stared out into the distance. Maybe she was reflecting on the perils of fledging.

About an hour later, I checked on the chicks from my terrace. And saw all three in the nest. They didn’t talk, but at least they didn’t quarrel. The whole dispute, whatever it was about, was settled in good time before Sandy came back with fresh lunch. Such is life. Forgiveness always wins.

This is a scheduled post. I wish you all a great week and a wonderful weekend. See you next week 🙂

55 thoughts on “Teen Moods. Flying Feathers. And Other Excitement at the Osprey Nest.”