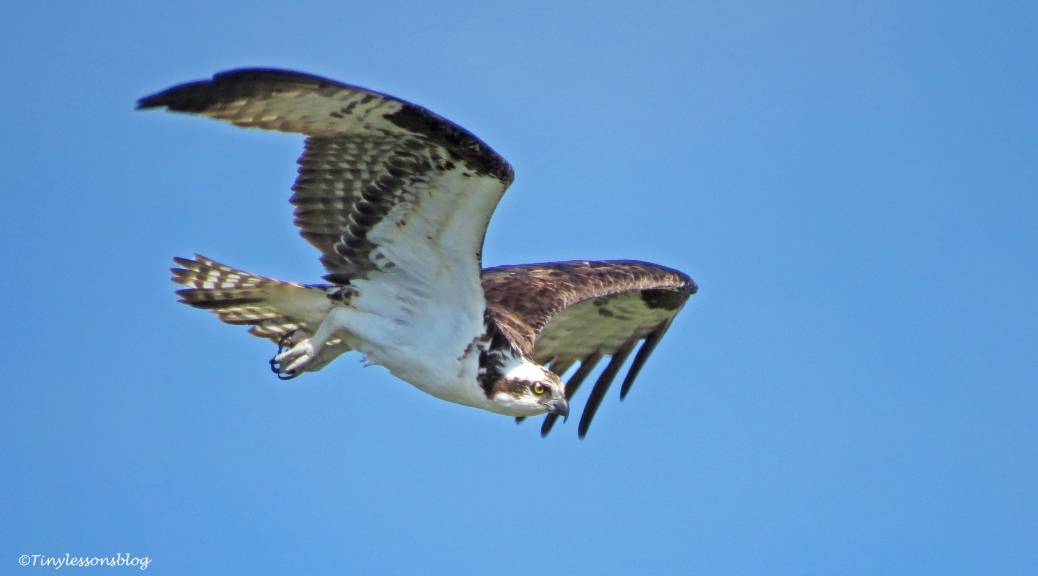 No baby news as yet for the Osprey Family.  Mama Sandy and Papa Stanley are still sitting tight on the egg(s), taking turns. Sandy sits from sunset until sunrise, then gets a nice break after breakfast for bath and exercise.

She also gets a short break in the afternoon, and a last long one just after dinner before sunset. The shift change is quick and smooth, well practiced by now.

Just a little later this day, on my way home, I found him on Marriott’s roof looking for fish in the bay, but also checking on Mama every now and then. It’s quite far from the nest, but I’m sure he could both see and hear her.

But I’ve seen some indications that hatching is imminent. Sandy gets up, exercises a bit and inspects the egg(s), which she hasn’t done before. She’s counting the days, I’m sure.

And Stanley has moved his perch closer to the nest. Last few days I’ve found him on a lamp-post just south of the park border and only 30 feet from the nest. I took this picture of him on St. Patrick’s Day through some thick trees. He was sleepy after eating the head of the fish and was just guarding it until Sandy would tell him she wants to eat.

A wonderful little couple. But has their week been just peace and quiet? Of course not. Osprey Steve has flown by a few times, but heeded the warnings and disappeared quickly. Maybe he’s finally learning. But that’s not the case with the Great Blue Heron who attacked the nest couple of weeks ago. He did it again.

This time I had just left to go home and had reached the opposite end of the marsh when I saw a Great Blue Heron fly right over me from the beach towards the nest. I saw Papa Osprey intercepting him in the air about ten feet from the nest. I scrambled with my camera that I had already shut off and placed in my bag. And saw a wild chase over the salt marsh. The culprit was fleeing and Papa was chasing him. I managed to get them both in one of my wild shots from very far. You can see Stanley coming back towards the marsh and the Blue Heron flying over the marsh trying to find a hiding place.

I just had to return and do some detective work. I couldn’t believe the culprit was the resident Great Blue Heron, whom I had named the Mayor of the Marsh, and seen around for the whole year. And I was right. Little detective work sometimes pays off. There were two Great Blue Herons in the marsh! The youngster (pictured above) who just flew in and attacked the nest, and the older gentleman. He was watching the drama from a small islet, and I had not seen him earlier. That explains a lot.

I have one more funny thing to report.  You remember the old palm trunk where Papa Stanley has his man cave penthouse? Now that he’s moved closer to the nest and is not using it much, it has become a very busy condo building for nesting birds.

Oh, I almost forgot. The Green Heron, whom I haven’t seen for months, returned to the marsh just in time for St. Patrick’s Day.

That’s all for this week. Unless there are breaking news. I hope your week has been great so far.

Reporting from the salt marsh, Tiny