Last Sunday the weather finally warmed up and I’ve been able to take a short walk/jog/run to see my feathered friends in the salt marsh several times. It’s been quite a week. Events from high drama to comedy, and everything in between. But I’ll try to be short.

On Monday, the Osprey family’s peaceful life was interrupted by a lightning fast attack by an egg thief. It was the most dangerous event I have witnessed, and also one of the most humbling moments for my bird photography. I missed the main action:  Papa Osprey fighting off a direct attack on the nest. Such is life, I have so much more to learn about these birds. But I’ll tell you the story anyway.

I was standing and watching Mama Sandy sitting on the egg(s) and Papa Stanley keeping her company. She was talking to him. Suddenly Stanley started flexing his wings. Silly me thought he was getting ready to fly out. So I zoomed in and started shooting. Little did I know that from right behind me a big bird was approaching the nest. I should’ve understood something serious was up. See for yourself. 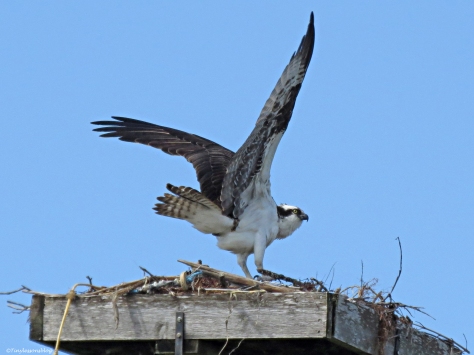 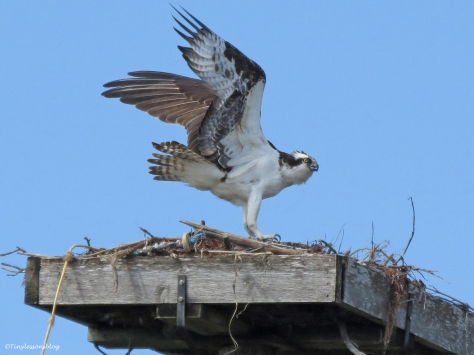 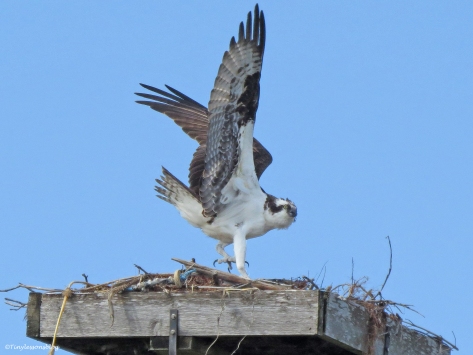 Papa Stanley turned around and in the next half second I saw a big bird above my head flying right towards the nest. Mama Sandy was already pressed tight over the egg(s)…not visible from the ground.

The next one second was crucial. While trying to refocus my camera, I saw a fight in the air just a feet or two above the next. Papa Osprey was defending the nest against the intruder with his talons and the intruder was attacking Papa with his bill. I didn’t even register what bird it was, only that it was much bigger than Papa Stanley. I got a shaky picture of papa and half of the bird 🙂 just below the nest where the intruder fled. Papa was right on his tail. Mama screamed. I think I might have too.

While the attack was thwarted in one second, Papa was chasing the egg thief over the salt marsh for several minutes. He was diving down repeatedly and I couldn’t see what was going on. Mama Sandy sat up in the nest and watched the drama.

Finally after about 10 minutes Stanley returned to the nest to ensure Mama and the egg(s) were fine.  And it’s my understanding they were.

Now I looked at my picture of the half bird. I saw it was a Great Blue Heron.  On my way home I found him at the very opposite end of the marsh. It looked like he got his butt kicked pretty good by Papa Osprey. I hope he learned his lesson.

The rest of the week has been rather fun. Sandy and Stanley have been taking turns in incubating the egg(s).  It seems that Sandy gets at least two long breaks every day, maybe more.

And now it’ll be only a couple of weeks before there should be a hatchling!

Papa Stanley still goes to his man cave to eat. He seems to be eating the head and the tail of the fish, giving Sandy the best part. He’s a good hubby and dad.

One day I saw him eating there, and the next day there was a colorful visitor borrowing his perch, a Nanday Parakeet, again. Stanley flew somewhere else close by to finish his fish.

To tell you the truth, there were two visitors. A Red-bellied Woodpecker was hard at work to find food in the same dead palm trunk.

Back in the marsh, many birds have been showing off their fishing skills, the most expressive being the Reddish Egret. He is the showman of the marsh, but that’s another story altogether.

I can tell you the Great Blue Heron has been keeping a very low profile. Staying at the other end of the marsh every day.

I wish you all a great weekend. Reporting from the salt marsh, Tiny

55 thoughts on “The Egg Thief. And His Punishment.”