On the weekend between Christmas and New Year, I decided I had to get moving. I mean really moving. An hour of jogging around the salt marsh nearby just wouldn’t cut it. So I decided to go hiking on Honeymoon Island.

This beautiful island in the Gulf of Mexico was used as a hog farm by early settlers, and consequently it was called Hog Island. But when a developer from New York bought the island in 1930s, and built 50 palm thatched huts  for honeymooners, it became known as Honeymoon Island.

In 1939 the developer held a competition for newlyweds, featured in the LIFE magazine, and the winners were flown onto the island for a their two-week honeymoon.

Today the island is a beautiful state park with gorgeous beaches and nature trails, and you can reach it by car on a causeway from the city of Dunedin. I drove there right after sunrise that Sunday, and started off on the Osprey Trail.  The natural beauty of the virgin slash pine forest was breathtaking.

Right away I saw Ospreys. Some were flying and others were just hanging around, many perching on dead tree trunks close to their nests. I guess they were waiting for their mate to arrive and the nesting season to start.

All my pictures are shot from the trail. It was not advisable to walk deeper into the forest trying to get a clear shot  or a close-up . Why not? Simply because I didn’t have any desire to “shoot” the rattle snakes who also live on the island. Here are a few Ospreys out of the over 20 that I spotted that day on the Osprey Trail.

I have also prepared a small gallery of the numerous osprey nests I spotted along the trail. I thought some of them were true masterpieces showing off the nest-building capabilities of these birds. Like a Home Show. 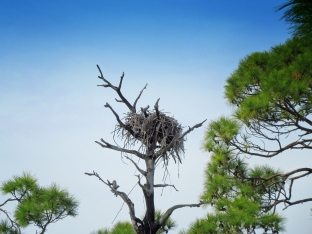 I spotted a couple of Woodpeckers too, but couldn’t get close enough for a clear shot. Great Egrets liked to sit on the top of the tall trees and trunks, beautiful against the blue skies.

And I spotted a bird I had not seen before, an American Black Vulture. He was sitting in deep thought and nodded off a couple of times while I was observing him.

It was a peaceful hike. No manmade noises in the cool winter air. I was alone in the nature with the birds that morning.

I wanted to hike back on the Pelican Cove Trail.  It was beautiful too and took me to the northwestern  side of the island where a small lagoon has formed between the main island and the “sand spit”. I didn’t see any Pelicans, but many other birds were wading on the “sand spit” side of the lagoon. The “sand spit” doesn’t have trails, but one can walk on the sandy beach to the north end of it to see tidal pools that tend to form there. I plan to do just that … next time.

I stood there for quite a while inhaling the serenity and admiring the view of the calm Gulf of Mexico.  Silence swept its arms around me and I lost the sense of time. Food for the soul, nature immersion at it best.

On my way back I spotted an Osprey fairly close to the trail. She had just caught a big fish for late lunch or afternoon snack. And was not happy to see me approaching on the trail.

My last discovery that day was a colony of fiddler crabs who had taken over the sandy trail. The sand was full of little “doors” to their dwellings. They were happily running back and forth conducting their business when I approached. But as soon as they felt the tremors from my tiptoeing feet, they hurried inside. I was free to pass their village.

It was a great hike! All my moving parts felt it for a couple of days. My soul still feels it.

I hope you enjoyed the trip and are not too tired from the long hike. Thanks for coming along!