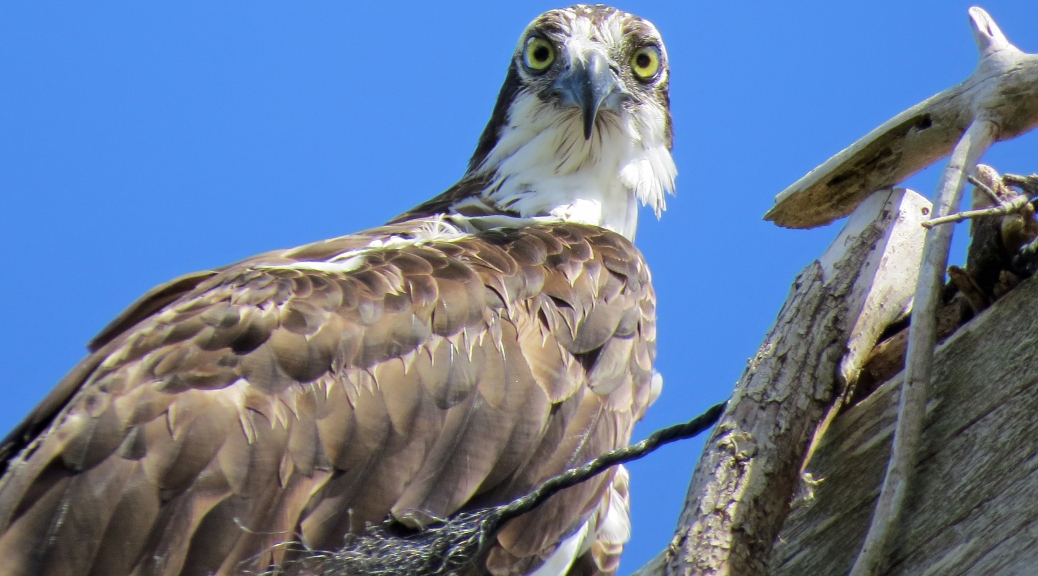 Yesterday was the liveliest air traffic day in the nature reserve so far this year. Everybody was flying somewhere. At whatever altitude. Papa Osprey perched on the corner of his nest and watched the skies, much like an air traffic controller.

He was busy shouting instructions on when and where to land. And, in some cases, not to land at all. He was very clear about that. And loud. Landing permit denied.

The two gentlemen in question were ospreys. He saw these guys zooming into his airspace like fighter jets, one chasing the other.

The pursuer also had some questionable cargo. A half eaten fish was dangling from his talons.

Papa Osprey must have concluded that something fishy was going down. Maybe the hunted, who strongly resembled the other guy hanging around the area, had tried to steal the cargo. And now had to flee to avoid punishment.

They flew a couple of rounds above the nature reserve. You know, as in circling the airport. But got no permit to land from Papa Osprey. So off they went to settle their dispute on the bay-side. I could see Papa Osprey relax just a bit. But the congested traffic pattern continued. A Great Egret was taxing out and took off at the other end of the salt marsh.

She reached her cruising altitude in no time and was shooting away like a small jet in the general direction of the bay.

In another part of the salt marsh, a Snowy Egret had a rough landing on a small island. She missed the airstrip and landed in high grass. Almost simultaneously, a Roseate Spoonbill landed on the neighboring island. Dangerously close to an Ibis waiting on the taxiway. But so far so good. No accidents to report.

In the meantime, the island hopper, a Great Blue Heron, took off from the runway closest to the ocean.

He flew extremely low. Like trying to fly stealth under the radar.

I’m sure Papa Osprey detected him anyway. But he let it be.  It was a short domestic flight from one island to another.  Soon the heron landed safely at his destination.

After that a pelican passed over the salt marsh at an unusually high cruising altitude. I guessed he was going on a fishing trip in the ocean as the landing gear was still up. 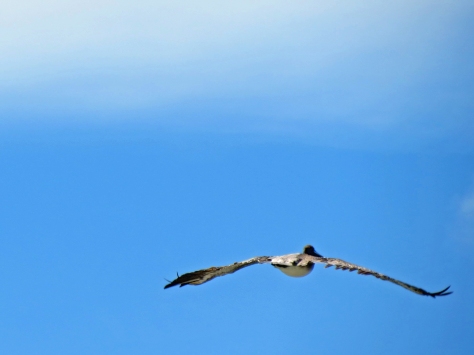 Then the traffic finally calmed down. The skies were empty and peaceful again. Well ahead of the Labor Day weekend. Papa Osprey took a well deserved break. 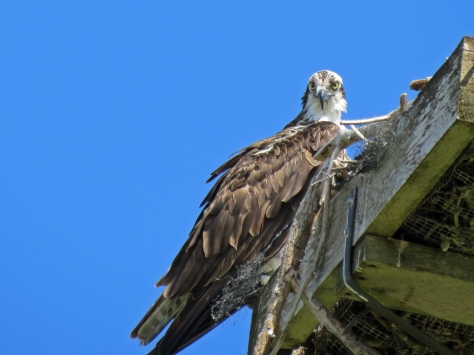 Be well now…and if you’re going somewhere for the long weekend, please stay safe in air, on the road and in the water.  ❤ Tiny

26 thoughts on “Congested Airspace. Papa Osprey in the Control Tower.”