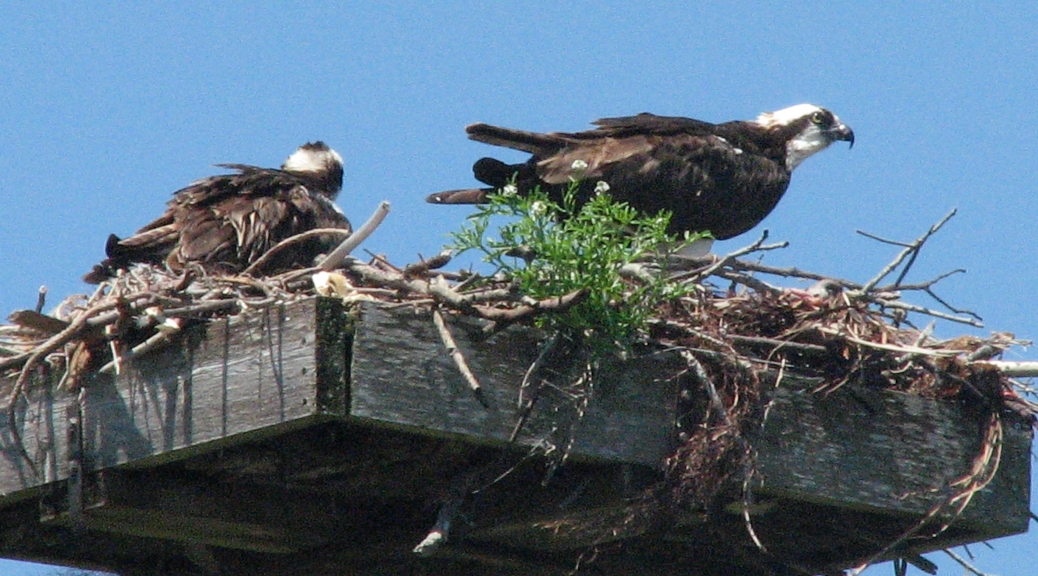 Today’s lunch time assignment in the nature reserve was exciting. Gorgeous weather and lots going on with the osprey family. Their house was clearly in need of repair and cleaning after the rains and winds we’ve had recently.

Papa osprey was busy bringing in new twigs while mama osprey was doing repairs and cleaning the nest. She (I’m sure it’s her) had also potted some flowers on the balcony as you can see in the pictures. Green plants with white flowers.

I wondered whether the flowers were in preparation for the nestling’s graduation. It’s about that time, isn’t it? The youngster had grown so much in the last few days that it was difficult to tell who was who. He was almost the size of his parents now.

I think it’s him here flexing his wings and talking back to his papa.  Stereotypical teenage behavior. He doesn’t have as much white on his head as his parents do, his head and beak are little smaller, and he’s still a little “fluffy” at the edge of his wings.  Did you notice the little white feather in the air?

And he wasn’t doing any chores. His papa was flying back and forth bringing in needed materials from Home Depot and his mama was busy repairing the nest.

Did you also notice that both papa and mama are looking straight at me, while the youngster had no clue that a budding ornithologist, although carefully camouflaged, was present? So it must be him.

This was also the very first time I saw both papa and mama flying away from the nest and leaving the nestling alone there for a couple of minutes. When mama osprey executed a short flight (for exercise, I’m sure), she didn’t go far from the nest. She just circled it a few times and went straight back. But the fact that she did leave him alone speaks volumes. He’s approaching independence! I hope to be invited to the graduation party. And if I am, I’ll vouch for you too.

17 thoughts on “Preparing for Graduation?”