We may think a daily 30-minute commute to work is too much. And occasionally, depending on traffic,  it may be longer. But everything is relative. I learned that first hand when commuting to work from the Gulf coast to the nation’s capital by plane for over four years. My ride was an Airbus a319. Colleagues, friends and acquaintances would ask me how I could put up with it. Wasn’t such a commute just horrible? So stressful? No it wasn’t. I have to admit that in the long run it was a bit tiring, but definitely some of it was positive as well. 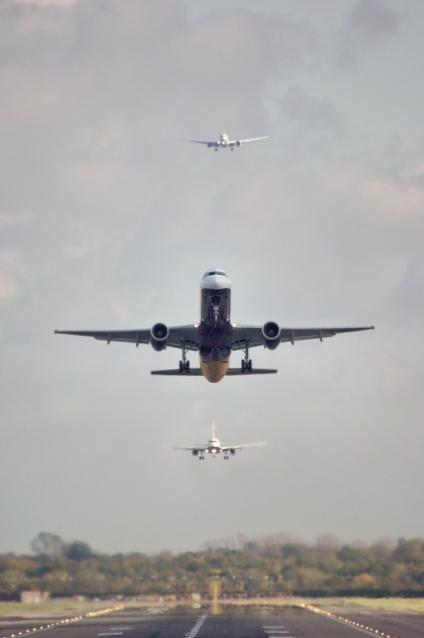 Every Monday (or later Tuesday) morning I would wake up here at the beach, commute directly to my office and stay during the work week in our house up north. And every Thursday or Friday evening I would come back home to the beach. By time, I could work virtually more and more and consequently spend less time physically in the office, often only three days a week, packed with meetings and other engagements.

My typical Sunday (later Monday) evening would include a preparatory ritual: prepare the coffee maker and my breakfast sandwich. Put my work clothes on the guest bed and my work laptop and papers in my tiny carry on, print my boarding pass. And my typical commuter morning would start at 4:45 a.m. I would get up, put on my coffee maker, take a quick shower, have my coffee and  my breakfast sandwich, and make myself in order. Around 5:30 I’d take my small carry-on and drive to the airport in about 30 minutes. Nice drive, hardly anyone on the roads. I’d find my spot in the long-term parking and go through security. Hi how are you today everywhere.  It was all very smooth because I had no luggage, just had to remember to take out my laptop and remove my shoes. Then have an espresso and a yoghurt  in the lounge, watch early news and go to the gate to board at 6:30.

And that’s when I’d meet the commuters. Either the Monday crowd with my friend Eric who was a high-end computer consultant in his early thirties, and whose first child was born while we were in the commuter family. We all loved the pictures of his baby girl and sympathized with him when he had not slept the night before. Or it was the Tuesday crowd with my friend Larry who was an engineer and had commuted to work in the nation’s capital for 17 years when we first met. He was in his early seventies now, still going strong. When you’d greet him at the gate and ask how he was doing, his response was always the same: I’m super! His weekends at home on the beach would be full of fishing adventures, baseball and golfing. He had dozens of grandkids and did a yearly cruise with his large family somewhere exciting.

My granddaughter was born during that time and her pictures on my Blackberry were admired by both the Monday and Tuesday community! It’s funny how we grew together. We’d tell each other of our plans so that no one would get worried if there was a “no-show”. Oh, Larry is on his cruise now, we’d say.

The two hours on the plane went by fast. After the initial gathering of miles they just piled up, and as a result I soon reached the highest pinnacle in the airline’s frequent flyer program. And sat in First for 99% of the time from my second year onwards. It was undisturbed time, so I could do work that I had left “for the plane”. Or doze off for another hour and a half if I had not gotten to bed on time the night before. Or I could read books on my Kindle. Then arrive at my office before 9:30 a.m.

I’d then work hard and long hours in the office for 3-4 days and take care of the house in the evenings. There were a few surprises every now and then when I came back to the house, like the snow storm in 2009 that caused six huge trees to fall around the house over one weekend…but I have to confess that I also enjoyed a bunch of nice dinners with good friends on those week nights I spent in D.C.

After my “week” in the office was done, either on Thursday or Friday night,  I would go to the airport directly from the office for my 7:30 p.m. flight back to the beach. Aah, I could breath the ocean air and relax! Even if I had to work remotely on Friday, arriving at the beach on a Thursday night always felt like starting a mini vacation.

Then, almost two years ago now, I called it quits. Left Eric, Larry and others still commuting. They celebrated my last “regular” commuting flight with me, we had a toast and many hugs. I felt ready to start consulting on my own while enjoying the ocean views on a full-time basis. Looking back at it now, I think that the commute helped me to manage the many times extreme stress in the office.  My staff would often comment on my calm in the middle of the storm. Knowing I could soon relax in a peaceful environment was just very reassuring. Now I still fly for work every now and then, but it’s no longer commuting. And my destinations are now often overseas. More like a window to the world, always something new to discover!

It’s funny how we can adapt to various situations in life. And it’s even more marvellous that we can fine tune our routines to the point that it truly feels smooth. I did not miss my flight once over these years while I was able to minimize the time spent waiting. I believe that if we stay positive, we can find the silver lining in most circumstances.