I had not seen the pyramids in the dark the previous night, but now my breakfast table was literally in the shadow of the Great one. It was fascinating.  While having my espresso, my mind transported me to the Old Kingdom, about 4500 years into the past. I could almost hear the activity going around the great pyramid. Lots of shouts and yells by the skilled workers coordinating their movements, and bangs of enormous, heavy (2.5 tons avg.) stone blocks being lifted up and fitted in place. The Pharaoh wanted his tomb ready in good time before he would need to use his stairway to heaven. And it needed to be fitted with everything he would need to be comfortable in the afterlife.

Later that day I would visit the tree pyramids for the second time. The largest and first one was built by Pharaoh Khufu, the second one by his son Pharaoh Khafre, and third, much smaller one, by Pharaoh Menkaure.   The second one also has the famous Sphinx, a gigantic sculpture of limestone featuring a sitting lion with the head of a man, likely portraying Pharaoh Khafre himself.

I always see things in my mind’s eye when I visit historical sites. My mind creates something I playfully call the haze of time that allows me to peek into the past and imagine how life was then. In walking through some of the pathways I could almost hear the funeral procession slowly approaching the entrance way. Or when visiting the chambers, I could see the painters and writers working on the reliefs illustrating the life and beliefs of that time, many of which picture the workings of the afterlife. Somehow the Sphinx talked to me a lot. When walking close by, I sensed different situations, such as the many inspections when it was built, and the celebrations of its completion. I was awestruck by the mysteries of the past. 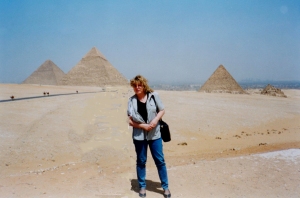 The concept of time also got a make-over when I visited the pyramids that day. I truly realized how short our time here on earth really is and how we should strive to use it wisely. It’s all about the perspective we have at any given time, and how we relate to the big picture of existence itself.

The next day I had an opportunity to spend some time again at the Cairo Museum, which has a collection of 120,000 items. The many galleries exhibit huge statues,  smaller sculptures, pictures and writings that all have their own historical story. The many mummies are interesting too, most of them had been very influential and powerful people in their lives. But I am most intrigued by the artifacts discovered in the tomb of  Pharaoh Tutankhamun that are on display in one of the largest sections of the museum. So that’s where I spent most of my time again this time.

King Tut was the boy who became a Pharaoh in the New Kingdom at age of nine and ruled for about ten years before he died. The artifacts found in his tomb in the Valley of Kings in 1922, tell a fascinating story about his time (ca 1330 BC). There are two of his three coffins, the famous golden death mask made of two sheets of gold, inlaid with coloured glass, carnelian and lapis lazuli, his impressive Sarcophagus and the exquisite, gilded bier on which his three coffins rested within the Sarcophagus. There are numerous pieces of furniture, including his throne, chairs and cabinets. There is his chariot, and there are large food jars, intricate small alabaster sculptures, perfume and oil jars, other small sculptures and hundreds of figurines. And of course there is his jewelery, lots of gold, silver and bronze pieces fitted with precious and semi precious stones and colorful pieces of glass. And then there are clothes. Practically everything King Tut would need in the afterlife. 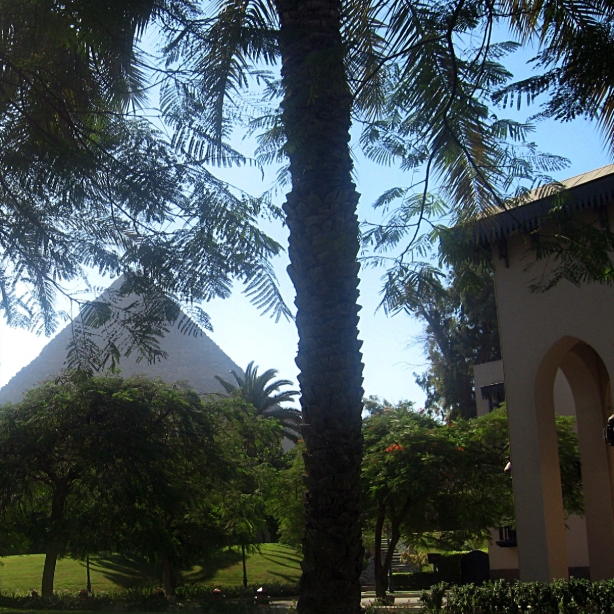 What I admired most was the extremely skilled workmanship exhibited in all these artifacts, from the intricate metal and wood work to his clothes. They were extremely well sewn. And I will always remember the fascinating small gloves. They had once been white and they were so well made! I couldn’t help but wondering who made all these wonderful things. How did they live, what was important to them and what they dreamed about? When I looked at these treasures, I felt connected to that time in the past.

I hope you’ll get an opportunity to visit an exhibition featuring some of the artifacts found in King Tut’s tomb (there are several ongoing at any given time around the world, now for example in Seattle and recently in Paris). If you do,  I am sure you’ll agree with me that reflecting on the times past, will add new dimensions to the perspectives of the now, and into the future.

4 thoughts on “Mysteries of Time Past”