I’m a glass half full person. Tend to look at things from the sunny side, so to speak. If it ‘s cloudy, like it sometimes is in life, I put my sun glasses on anyway because I trust the sun will look out soon again. And it always does, sooner or later. I have this belief that life will follow it’s intended course for me to fulfil the purpose of being here in the first place. Provided I stay positive and allow it to flow freely, make choices with my gut. Nothing has proven me wrong so far. On the contrary, many of my experiences strengthen this belief. Basically, if I have a positive outlook, I will attract more positive than negative developments. This doesn’t mean that nothing “bad” has ever happened in my life. There have been trials and tribulations, but I think they can be overcome much better and faster with a positive outlook.

Soon after I lost my mom to cancer when I was 19 and she was only 39, I attended an in-house training session in a hospital where I worked on my summer break from college. This training session was given by a relatively well-known public speaker and the topic was “the power of positive thinking”.  I remember the speaker cited research (already then) into the fact that people who had a truly positive outlook, stayed healthier and were able to overcome diseases better than those with a negative outlook.  That message sat with me and I started owning it more and more with time. I understood it was my choice how I wanted to view life.

I believe that appreciation is a big part of being and staying positive. Appreciating the big, but maybe more importantly the little things in life on a daily basis, and not taking them for granted. Such as the important people in our lives, our home, the beautiful days when they occur, friends, pets if we have them, the beauty of nature, and so on. Not so much the “things” we have. They usually don’t really contribute to how our lives will turn out, but they too can be very useful at times and worthy of some appreciation. I’m thinking particularly of a car I once had. Actually it was an SUV, a very strong and plain one. No extras or finesses. I always appreciated its sturdiness, but one late evening in Ethiopia my appreciation grew tremendously. We kind of became a team, developed a bond of sorts.

We had a TV repair man in our house late that afternoon, as he had been on several occasions earlier. I had always given him a ride home because he didn’t own a car and there was no reliable public transportation. So also this evening. It was already very late when he finished his work and our TV was finally working again. I was driving towards his home, as I had done a few times previously, when he suddenly told me that he had bought a house and moved to a completely different part of the city. Or rather, as it turned out, to a completely new development far away from the city center of Addis Ababa. I was happy learning about his new circumstances and drove to the remote area following his directions.

I dropped him off at his house, one of the first few completed, then drove on the narrow gravel track towards what I thought was a real road. After a while, navigating in the complete darkness of the African night, my track suddenly disappeared. And down I went! Down into something unseen to me. I just sat there down in a hole in my old SUV in the darkness of the night. And no one knew where I was! I had heard of the brick sized cellular phones that had just been invented, but that knowledge didn’t help me a bit. There was no phone, no wireless network, just me in the dark hole in the middle of nowhere. 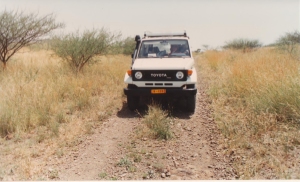 I remember telling to myself: stay calm, stay positive, you’ll get out of here. Then a thought occurred to me. I had a 4-wheel drive vehicle. I had never needed that ability, and I knew it was not a matter of switching it on by turning a knob inside the vehicle – like it pretty much is nowadays. So I took out the instruction book from the glove box, turned on the inside light and read the instructions. In addition to switching the gear stick onto heavy four-wheel drive (you know the one that allows top speeds of only 5 km/hour), I had to go out and physically turn the knobs on all four wheels! If that’s what’s required, then that’s what I’ll do. So I climber out of the SUV, down to the muddy hole in my work skirt and high heel shoes. I fumbled around in the mud and finally found the knob I had to turn, on all four wheels. Then, very muddy now, climbed back into the vehicle and shifted the gear stick on the low 4-wheel drive. I pressed the gas pedal to climb out of the hole. The engine revved, the wheels skidded in the mud. The climb was too steep, in the hole we stayed, me and my vehicle. I tried several times with the same result. Then I just sat there. And soon a great thought came to me, what about trying to get up from there backwards? Reversing. So out I went again down into the mud. By using my hands to feel the slopes,  I realized that the back wall of the more than one foot deep hole had a little bit better angle, not completely 90 degrees. So I put the shift in low 4-wheel drive,  reverse now, and said a little prayer. When I gradually increased the gas it was like sitting in a large jumbo jet and pulling full gas …up, up you go. And slowly but surely, we climbed out of the hole backwards! I felt a deep appreciation and partnership with my old SUV! And I was immensely grateful. I turned around and somehow found my way back to a main road. When I drove back through the city, I could hear the mud crackling and popping all around my vehicle.

My family was outside waiting for me when I finally came home. They had been very worried about my whereabouts in the middle of the night, but they all broke into an uncontrollable laughter when they saw my SUV on the drive way. It was covered by mud up to its roof! I was very appreciative…of everything, it was so good to be back home.

So,  I guess that sometimes it is easy to appreciate how things turn out, sometimes it’s harder. Right now, I appreciate the calm and muggy Friday night. And that’s all I need.

6 thoughts on “The Flow of Things and My Old SUV”